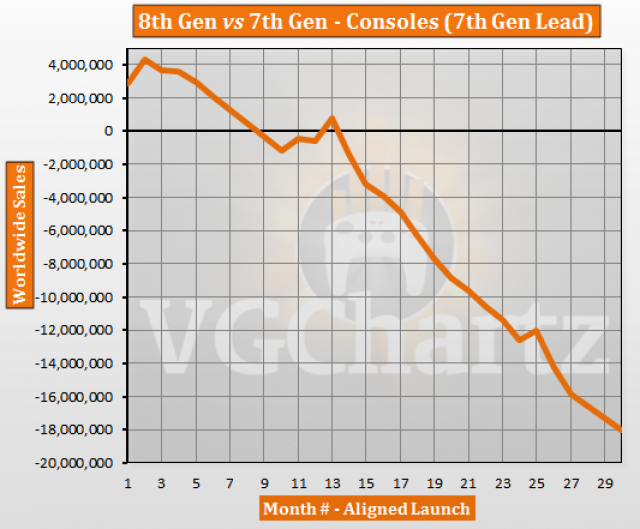 This first chart compares aligned home console sales between the 7th and 8th generations. That is the Xbox 360, PlayStation 3, and Wii combined sales aligned, versus the combined aligned sales of the Xbox One, PlayStation 4, and Wii U. 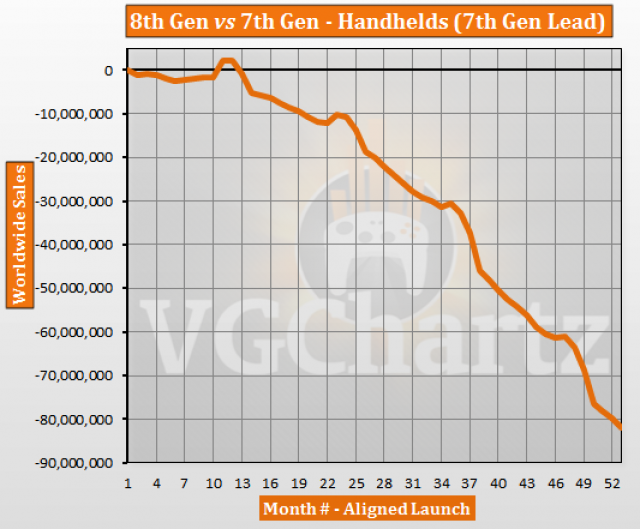 This second chart is comparing aligned handheld sales between the 7th and 8th generations. That is the DS and PSP combined sales aligned, versus the combined aligned sales of the 3DS and PlayStation Vita.

The Wii U is a tablet add-on for the Wii.

I wonder if they took the WiiU out and it's poor performance how that would compare 7th and 8th gen. Regardless it does look like fewer consoles owned than last gen regardless. Does that mean less demand though? What was the price of the Wii and was it comparable to the WiiU? Are people just sitting on the bench waiting for a new Nintendo console given the potential short life cycle of the WiiU?

I have another article that looks at that. http://www.vgchartz.com/article/264410/ps4-and-xbox-one-vs-ps3-and-xbox-360-aligned-sales-comparison-april-2016-update/

I have another article that looks at that. "PS4 and Xbox One vs PS3 and Xbox 360 - Aligned Sales Comparison - April 2016 Update"

At the current pace handheld sales will be 1/3 of what they were in the 7th gen.