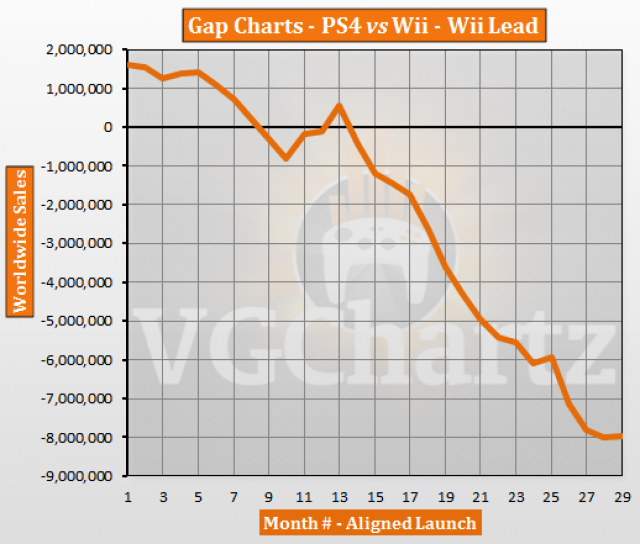 March 2016 is the 29th month that the PlayStation 4 has been available for. During the latest month the gap grew in favor of the PS4 when compared with the Wii’s 29th month on sale. The gap decreased by 14,595 units. In the first 29 months, the Wii currently leads by 7.97 million units.

We will see. It will probably fall a bit more behind in April and catch up some in May due to Uncharted 4. I see next year where the PS4 starts catching up consistently.

The PS4 will gain throughout August, with a brief Wii boost for Monster Hunter. Things pick up a little with Sports Resorts in August. When Wii Fit Plus hits in October, the Wii will begin winning. After NSMB the Wii has a crazy strong December, that should wipe out whatever gains the PS4 made, and possibly put the Wii up between 9 and 10 million.

That's assuming PS4 sales are in line with what they were last year. If NEO or PSVR really take off, that could turn the tides.

The Wii had 3 strong years before sales dropped sharply. PS4 will eventually start catching up.