In order to give Wii U owners a taste of things to come, Nintendo is offering players three time slots this weekend to test drive its newest third-person shooter, Splatoon. Here are my first impressions of the game.

Over the course of 60 minutes, I played about 10 matches. I won six and lost four, and enjoyed every frantic minute. Even when losing, the game is a joy to play; even getting rolled over with extreme prejudice by a "Splat Roller" -- and, believe me, this happens a lot -- puts a smile on my face. Bottom line: Splatoon is fun to play. It might sound trite, but this criterion is vitally important, especially with a new, unproven property like Splatoon. 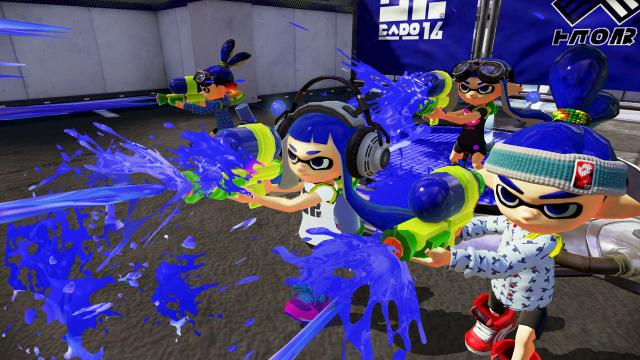 The "testfire" starts with each player choosing a squid kid, along with his or her gender and eye color. Then, a tutorial. Next, weapon selection. Players have four choices: the Splattershot, an all-around weapon (think assault rifle); the Ink Gun, a relatively weak gun with a high rate of fire (think SMG); the Splatterscope, a charge weapon with long range (think sniper rifle); and, last but definitely not least, the Splat Roller.

The Splat Roller, an early favorite among players, is a giant paint roller that lays down a line of paint wherever players move. Plus, it crushes any opponent foolish enough to cross its path. At first it will appear as if the Roller is overpowered, but nimble players armed with a Splattershot or Splatterscope can actually dispatch a Roller rather easily.

Back to the tutorial. This short episode breaks down the nuts and bolts of Splatoon for the player. You learn how to aim, move, shoot, and transform. The default control scheme is motion-controlled aiming, which I found off-putting at first. However, after the third match these controls started to feel much more natural. I was surprised that I ended up preferring motion controls to standard analog controls (yes, Splatoon has control options). 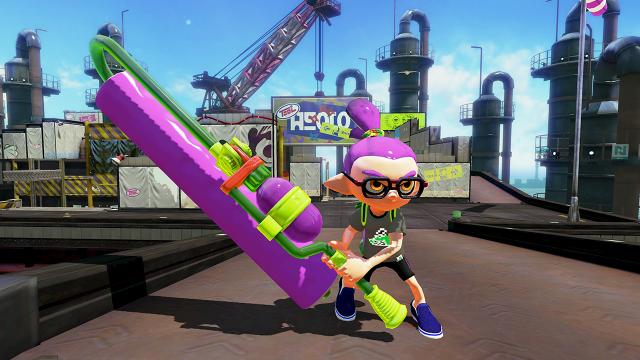 The testfire is limited only to a single mode: "Turf War." This is a four-vs-four multiplayer match that pits two teams against each other in one of several industrial zones. Each team must cover the zone in paint, and stop the opposing team from doing the same. When the timer ends, the totals are calculated and a winner is declared. It's entertaining watching Judd, the cat mascot of Splatoon, calculate the percentages at the end of each match. Often it's difficult to tell at first glance who won, and matches can easily go down to the wire. In one of my matches, for example, my team won by the slimmest of margins: 0.1%.

So, what about the question on everyone's mind: how does the lack of voice chat affect the game? Not as much as I had feared. Each match is a whirlwind of activity, and there's barely any time to process one's own strategy, let alone formulate one with a team of four. Communication ends up coming indirectly from the much maligned GamePad, which functions as a map and a constantly-updating status report.

Here, players can see which areas are being overrun by opposing players, which teammates have fallen in battle, and where each skirmish is being waged. With the touch of a finger (or stylus), players can launch themselves into the heat of battle, to avenge a fallen comrade or protect a living one. Would the inclusion of voice chat be a welcomed addition to Splatoon? Yes. Did Nintendo, by excluding it, alienate a host of online multiplayer fans? Most certainly. But, after playing this testfire, I'm confident I can live without it. 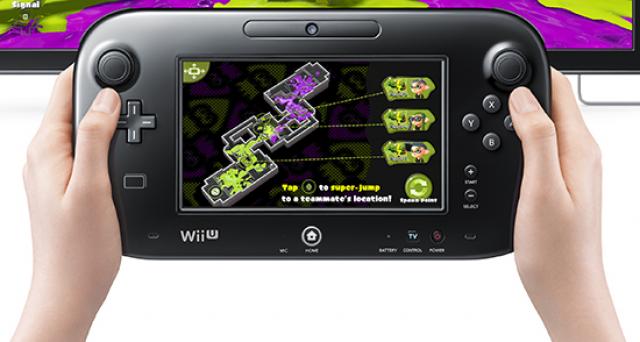 So, what's the final analysis? Well, without having played local multiplayer or the single-player campaign, I can't give any kind of reliable verdict. What I did play, however, was encouraging. Even when limited to four weapons (and several sub-weapons) and a handful of maps, I found the experience engaging and addictive, and as each match ended I couldn't wait to jump into the next one.

The controls, after an initial learning curve, are smooth and responsive; the graphics and sound design match perfectly with the carefree wackiness that Splatoon is hoping to achieve; and the weapons, paint mechanics, and stage designs combine to make a third-person shooter that's both accessible for neophytes and rewarding for veterans.

It will be fun to play the real deal on May 29.

These next couple of weeks is gonna be a tough wait, that's for sure

Was a lot of fun, can't wait for the next one in an hour! :D

I think that pretty sums up what my and so as the others impressions of it. Everything was positive for me, except with the continues disconnections ONLY when it was SEARCHING for a match. It didnt occur or have lag while i was in a match. 6 more hours to go for ROUND 2!

Servers at max and it was free. Stop whining.

He is not whining. Its a very positive coment.

Those three hours were simply addicting like nothing before. Too bad I can't be part of the second Global Testfire. But the wait is soon over and I can really dive into the mechanics and tactics...