If ever the maxim "don't judge a book by its cover" appropriately described a video game, it's for MonsterBag. Cute and cuddly on the outside, the game hides a wickedly dark sense of humor on the inside. MonsterBag was developed by IguanaBee, a self-described "passionate indie studio" intent on making games with "new mechanics, polished aesthetic, and interesting gameplay."

According to those criteria, IguanaBee's latest game is a success. Mechanically, MonsterBag makes good use of the Vita hardware; artistically, the game is expressive and endearing; and, in terms of gameplay, MonsterBag hits an engaging spot somewhere between slow-paced puzzles and twitch-based action. Despite these high notes, however, the game suffers from a few low notes, including obtuse puzzles, low replay value, and, especially in the second half of the game, recycled gameplay scenarios. 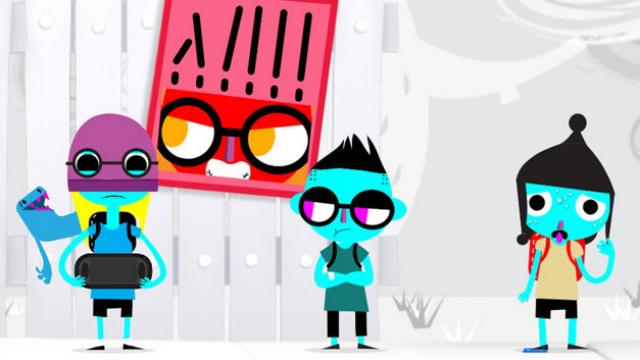 Monsterbag tells the story of a young girl and her pet monster attempting to reunite on a busy day in the city. What begins as a silly quest to navigate lemonade stands and public transportation quickly and unexpectedly transforms into an odyssey through the apocalypse. The story takes a weird and darkly humorous turn early in the game, and from that point on it's up to the girl's loyal blue monster to save her from the end of the world.

The core gameplay mechanics of MonsterBag are stealth action and puzzle solving. Most of the levels in MonsterBag are arranged with several people or monsters in a line. Using careful timing, the monster must leap from back to back, always careful to remain concealed. If a citizen with angry orange eyes spots you, well, expect a gruesome death animation and a quick reset. 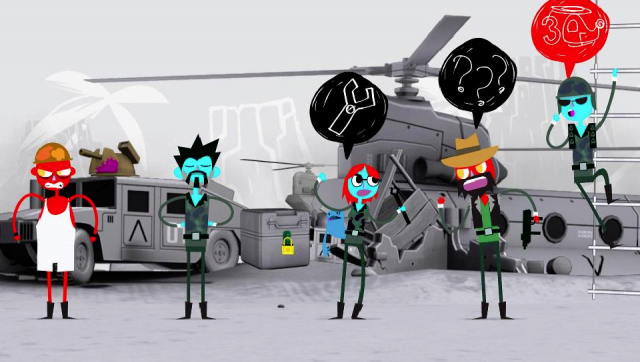 While hidden, the monster can solve a number of puzzles, by inferring from evidence scattered around each environment. A cup of lemonade might placate an overheated citizen and allow passage, for example. The lack of background information for each puzzle, in some ways, is refreshing. But in some cases, the vagueness of a particular puzzle makes the game more frustrating than challenging. In general, though, the puzzles operate according to the rules of logic. They're fun and often hilarious to solve. Unfortunately, the puzzles that appeared new and different in the first part of the game become somewhat stale by the game's second and third acts.

MonsterBag is a short game. It could, in fact, be finished in a single sitting. But it's fun while it lasts. When the main game is complete, players can return to the action in "Oblain Mode" (the same game with higher difficulty). Despite this post-game content, and a collection of hard-to-get trophies, MonsterBag is disappointingly short on replay value. That fact, combined with some obtuse puzzle design and redundant gameplay in the game's closing chapters, makes MonsterBag something of a mixed bag.

Downloading it now! Thanks for the review.

This first party Vita game is good and surprisingly brutal.