It was back in March when I first took on the case. First day of spring. Not that the heavenly landlord had seen fit to spring for a higher heating bill. It was a cold, cruel breeze that met my face upon leaving the local game merchant's shop. Sharp and cutting like a Lego brick against an unshoed foot. But then, I guess that's fitting considering what my case involved.

Lego City Undercover. A title for the Wii U.  Darn rare thing these days.

I've been down this stretch of road before. Electronically commanding digital replicas of the plastic brick foundation of my childhood. Only this time there was a twist. No double feature. Lego wasn't sharing the limelight with Lucas, Rowling, or Tolkien. It was the only train on the track, trying to get where it needed to on its own steam. Good for them.

Then there he was.

First time I heard the name my face almost cracked in humor. Almost. He was like a casserole. You can see all the ingredients in his recipe but it was spoon fed to you all at once. No matter how many law enforcement tropes went in, his personality was still just like his hair. Plastic.

Maybe plastic is what this world needs. You have plastic firemen driving plastic firetrucks down plastic avenues to put out plastic fires. Real water though. You can splish and sometimes splash. Creepy how it never rains, though. It's always sunny. At least on the surface. Below that surface, a plot was developing.

See McCain once put a nogoodnik, name of Rex Fury, away for being a bad bad boy. Only trouble is Rex got out early because of bad behavior. Now Chase has to clean up the mess by getting a little dirty. Going undercover. Playing dress up. All in a day's work.

His fashion sense comes with a great sense of purpose. He simply can't use a crowbar unless he dresses up as a robber. He has an allergy to dynamite unless his other hand is holding a miner's pickaxe. At least his time in the dressing room is short. Like some sentences. Unfortunately, like some other sentences the time to reach certain objectives are quite long and drawn out thanks to the slow pace of the various vehicles that Chase can take control of through the course of the campaign.

That's the rub though. You want an open world, you have to learn to love pounding the multicolored brick road. McCain can hop into any vehicle he spots. The steering can be looser than a politician's moral compass but you'll eventually get the hang of it. A trail of green Lego breadcrumbs help you get to granny's house to stop the big bad wolf, though don't be surprised if the siren call of greed and destruction rings in your ears.

The more Chase can do, the more you will want him to do it. Exploring is rewarding. Those rewards? Studs and bricks. In Lego City they call their greenbacks studs. Somehow both valuable and plentiful enough that the roads are paved with it. Bricks? Well, breaking up is easy in a Lego world. All it takes is a couple of knuckle taps to turn a tree into bricks. Collect enough of those and Chase can perform a Super Build. It's just like it sounds wiseguy. Make a large bridge, build a huge boat, summon a fire breathing dragon and all in a blink.

The Wii U gamepad is the jelly in this game sandwich. Chase will get video calls, have access to a full map, and even snap a few candids. Sure you can pinpoint hidden items but you can only have as many tagged as you can wear pants. One at a time. You set your sights on another and the first one goes back on the shelf. It may be limiting but it gets the job done.

If you make McCain keep his non-existent nose to the ground he'll be able to get the job done in around 18 hours. If you choose the road less traveled, you will be traveling that stretch for nearly a hundred hours. It is up to you how much bang you want your bucks to buy.

A little small for an open world. It may be comparing apples to oranges, but Lego City's apples are smaller than GTA's oranges. The thing is I'd rather have a great apple pie than a barrel of orange juice. Hmm, this metaphor has gotten kind of fruity on me. Maybe I'm just hungry.

What I'm really hungry for is shorter load times. When Chase goes into the city it becomes time to go fetch a drink from the kitchen. They must have to put the bricks in place piece by piece because a loading screen means you'll have to get cozy with the progress bar for a good minute.  60 seconds if that is what floats your duck. The loading time hurts, even if it is infrequent. Maybe not as much as landing on a bicycle with the seat missing, but it still hurts. Once the city loads it streams along smooth like tomato soup with a grilled cheese sandwich. Dang it. I really am hungry. I'd better wrap this up and get some grub.

This case has got me all twisted up inside. The dialogue seems aimed at an elementary school goer to the point that many of the attempts of humor were so simple they were just that. Attempts. Everytime they did good, they shot themselves in the foot by dumbing it down. But then there are pieces that don't fit the puzzle. References to Columbo, Dirty Harry, Shawshank Redemption, the Matrix, and many others which the rugrats won't know. This trying to show both sides of the same coin at once might even work, if they hadn't sent co-op to sleep with the fishes. For something that reminds me a lot of buddy cop flicks, it seems wackadoo they don't issue you a partner.

But maybe the times of co-op Lego games are long gone. At least the fun stuck around. For all the bruises and rough spots, this game it just like the Lego brand it uses. Colorful. Shiny. Creative. Solid. Above all, fun.

If you have the equipment for it be wise to pick Lego City Undercover up ... if you are the type to enjoy the Lego things in life that is. Not like there is much else for you to do with your Wii U at the moment.

Speaking of which, after lunch, I'm going to get back to work on this other case. He's a missing person last seen briefly a month ago. Poor bastard's even missing his arms and legs. Odd fellow. Goes by the name Rayman. 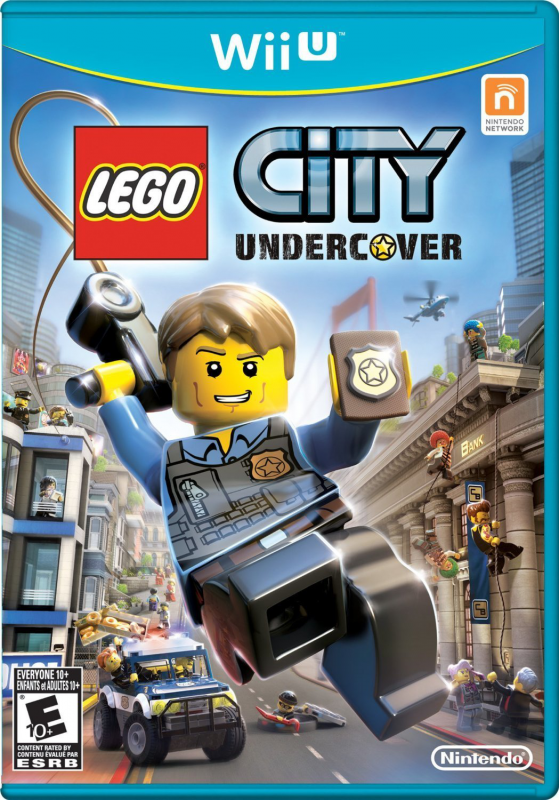