Daud the assassin is back in the second and final story-based Dishonored DLC pack. The Brigmore Witches picks up where the first DLC left off, putting you back in the shoes of the Knife of Dunwall, armed with his blade, his wristbow and his Mark of the Outsider as he continues his pursuit of Delilah and her eponymous Brigmore Witches, taking you through another three Dishonored-style semi-open-ended missions.

The gameplay is, of course, very similar to that of Knife of Dunwall. Only a few significant changes are present: the most notable are the addition of a power named Pull, and the inclusion of Corrupted Bone Charms. The former pulls faraway items towards you, and can be upgraded to seize enemies (dangling them helplessly in front of you for a quick and silent kill) and corpses (which can easily be looted). Whereas regular Bone Charms only offer benefits, Corrupted Bone Charms weaken you in some way: for example, increasing your movement speed whilst also increasing damage dealt by enemies, or a particularly interesting example which makes you invisible while you are standing still, but disables mana regeneration. Both are solid additions, functioning and integrating so well that you could almost forget that they weren’t in the main game, and the few new items you find here and there (such as the stun mine) fit nicely as well. All other changes from Knife of Dunwall, such as the favour system, are intact, and as such the base gameplay is still very similar to that of Dishonored, which is far from a bad thing. 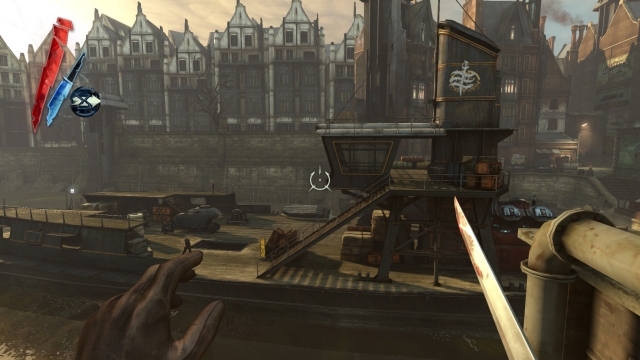 To summarise favours briefly, in addition to spending your foraged coin (which carries over, along with all of your possessions and upgrades, from Knife of Dunwall) on items and upgrades, you can grease a few palms to give yourself an advantage within the level, perhaps by having someone create a secret entrance, or procuring yourself a disguise to avoid the attention of the local guards.

Curiously, as in both Dishonored and Knife of Dunwall, the final level feels a little bit rushed, but it’s to a lesser extent this time. The final boss fight is a somewhat ridiculous addition considering this is ostensibly a stealth game, but it’s not at all difficult and it’s over within 60 seconds, so it isn’t really a concern.

The first level, set in a prison block where you can open individual cells and witness (or prevent) a series of executions, is great, but it’s the second, which takes place near a wharf in Dunwall, that really steals the show, with three fully designed sub-areas, quite a few sequential main objectives and plenty of treasures to find, including both kinds of Bone Charm, runes, and even a handful of Outsider shrines. It’s always nice to hear from the Outsider, but you still don’t come close to understanding who he is or where he came from: those are topics for future games in the series, if they exist.

Ambient dialogue has definitely been improved this time around. You do get the occasional nonsense conversations where one guard says something and the other responds to what appears to be an entirely different question (rather odd because I’m pretty sure this is scripted), but you also manage to overhear conversations about a certain witch’s childhood and family, and a certain guard’s opinion of the Overseers, a powerful organisation of warrior-priests dedicated to wiping out the evil influence of the Outsider. Following these conversations, you could well decide to spare a pair of guards whom you were earlier going to kill; or, at the very least, feel guilty when you plunge your wristbow into their skulls. 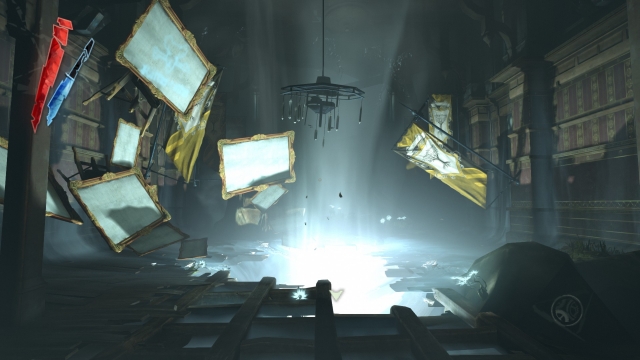 Your playthrough can be entirely non-lethal, but probably won’t be unless you are willing to put in a fair bit of effort. An upgrade available early on turns enemies you have killed silently into ash, hiding their bodies from prowling guards; for obvious reasons, this does not apply to unconscious enemies. I have always found Ghost playthroughs (in which Daud is never recognised) more satisfying, but whereas I had little difficulty with this in Knife of Dunwall, new enemy types, in particular a form of ghost bloodhound, meant that I was spotted several times during the final mission. Annoyingly, the game still doesn’t tell you overtly when you have been noticed, though if you pay attention you can pick out the particular sound that distinguishes a suspicious guard from one who is actively seeking you. The ease of quicksaving and quickloading (at least on PC) mean that, if you are willing, you can follow the perfectionist approach without too much pain unrelated to your own failures.

Looking at this DLC sequence holistically, the story is a nice digression from that of the original Dishonored. It expands a little bit upon the vanilla game’s campaign, but through its new protagonist it also tells a new and rather fascinating story, this time with a pretty respectable main villain in the form of Delilah. Looking forwards, the story of Knife of Dunwall and Brigmore Witches is actually pretty self-contained, tying up most loose ends that don’t involve the Outsider, but there is definitely enough material in this universe for a sequel, and perhaps more games to follow that.

If you’ve already played, bought and enjoyed Knife of Dunwall, it would be absurd not to pick up Brigmore Witches. It gives a fantastic sense of closure to Daud’s story, and it’s very similar to the first DLC pack, though with a slightly improved repertoire of equipment and abilities, and an entirely new range of brilliantly designed settings. Like Knife of Dunwall, it clocks in at around 3-4 hours, going up or down depending on your perfectionism, which isn’t at all bad for a $10 download. It’s still not quite as excellent as the main campaign, largely because of the reduced options available and the necessarily smaller scope of the story, but it has better level design and a much better ending, and more importantly it innovates a little whilst still remaining familiar. All in all, like its predecessor, it is an excellent DLC pack, which I can wholeheartedly recommend to fans of Dishonored, and indeed to anyone who is thinking of picking it up.

This review is based on a review code of Dishonored: The Brigmore Witches for PC, provided by the publisher.