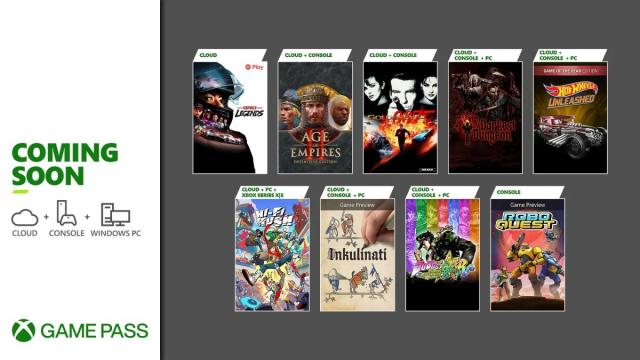 Hi-Fi Rush (Cloud, PC, and Xbox Series X|S)
Feel the beat as wannabe rockstar Chai and his ragtag team fight against an evil megacorp with raucous rhythm combat! From Tango Gameworks comes Hi-Fi Rush, an all-new action game where the world syncs to the music.

Roboquest (Game Preview) (Console) – January 30
Available now with PC Game Pass and coming soon to Xbox consoles! Blast your way through hordes of evil bots in procedurally generated environments in solo or 2 player co-op, upgrade your build as you progress and defeat powerful bosses. Be ready to dive into the futuristic world of Roboquest and help mankind find the mysterious and long-forgotten Haven-City.

Age of Empires II: Definitive Edition (Cloud and Console) – January 31
Age of Empires II: Definitive Edition is one of the most beloved strategy games ever made and is coming soon to Xbox consoles. Enjoy a new way to play this much-loved game on console including optimizations for playing with a controller and new tutorials to get you into the fun quickly.

Inkulinati (Game Preview) (Cloud, Console, and PC) – January 31
An ink-based strategy game straight from medieval manuscripts, where a rabbit’s bum can be deadlier than a dog’s sword. Take your turn in Inkulinati duels filled with unexpected tactical depth (and humor!). Embark on an ever-changing journey, build your own bestiary, defeat medieval superstars and collect perks to unleash special powers.

Darkest Dungeon (Cloud, Console, and PC) – February 2
Darkest Dungeon is a challenging gothic roguelike turn-based RPG about the psychological stresses of adventuring. Recruit, train, and lead a team of flawed heroes through twisted forests, forgotten warrens, ruined crypts, and beyond. Not only do unimaginable foes await, but stress, famine, disease, and the ever-encroaching dark.

Black Desert: Special Gift Bundle – Available now
Tis the Season to spend your winter with Woosa, Black Desert’s 25th new class! We’ve prepared plenty of content and a gift to celebrate the launch of the new class. Play now to start your adventure!

Vigor: Norwegian Woodchuck Pack – Available now
Put your axe down and take up your weapons! Chopping down your enemies will be as easy and satisfying as splitting a log in half! Enjoy the free exclusive outfit, powerful weapons, and open the Special Issue Crate. Show others who rules the Outlands!

Be sure to set some time aside for the following games leaving soon! Remember you can use your membership discount to save up to 20% before they leave the Game Pass library.

I'm a tad bit nervous about the crossplay for AoE2 between consoles and PC.

Presumably not an issue on the PC side.

They're adding a new control scheme that streamlines a lot of the game's mechanics, so it could possibly be a concern on the PC side.

I wouldn't expect it to be changed at all if using a keyboard and mouse. And I expect K&M and controller people won't be lumped together.

Shouldn't be a problem as long as you use keyboard and mouse. If you try playing controller vs PC you will be at a severe disadvantage.

Goldeneye is a bad port. Sad. Nothing like the amazing Perfect Dark one. Give Perfect Dark a try on Xbox afterwards and be amazed.