FromSoftware has found huge success with the action RPG, Elden Ring, as it has sold over 17.5 million units worldwide since its release in February.

Director Hidetaka Miyazaki in an interview with Famitsu was asked if he knew the reason for the success of Elden Ring and he doesn't know the reasons why yet.

"Honestly, I haven't been able to analyze much," said Miyazaki. "Sales are high, sure, but what are the reasons for that? Because we don't know yet.

"That's why I'm at a loss when asked why, but I have no intention of changing the way I've been making things. I try not to think about it too much because if I stick to it, it will be a distraction when I make the next work. However, I am very grateful and feel honored." 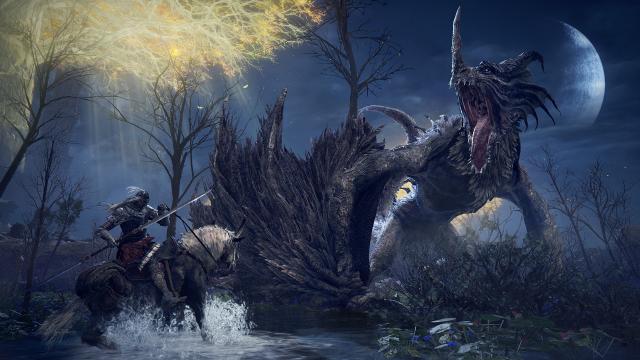 He added, "It's the same as what I said earlier, but we didn't really feel like we had become global. I think this is the result of making what we want to make, as we have been doing until now. I would like to continue doing that.

"I think that the reputation of selling 10 million copies will lead to a wonderful environment that backs up such things, so in that sense as well, I would like to create interesting things that are unique to us."

Elden Ring did earn the Grand Award from the PlayStation Partner Awards 2022 Japan Asia, which is awarded to the top selling game worldwide from a developer in Japan / Asia.

I think thats a good way of looking at it. Just make what you want and if you get some new ideas along the way, then incorporate it as you go.

Must only avoid complacency and not seeing changes needed, but yes no need to reinvente the wheel. But myself I would like they adding easier modes and improving the tools to have better visual and smoothier performance, still for the first one I know the community is very much against it and likely would damage them more than help doing it and for the second well that is something they have been able to avoid for a long time.

I dont think easy mode fits for these kinda games. You have so many options to help you out. From better gear to get help fighting bosses with other players. Also the feeling of overcoming difficult parts is so rewarding.

I know, and that is why I accept that the community is resistant to this change, and since it have been working for the game and userbase there is very little reason to change (even though having easier option for someone to chose wouldn't impact the joy of the ones who don't make the choice).

Even pre souls FR games were never easy. Go and play even Kings Feild,Otogi,Frame Gride,Armored Core,Metal Wolf Chaos and such they are pretty difficult.

I have to agree here. l love Souls, but i don't think It would fits well with Armored Core. They sure can evolve AC gameplay and make many changes to the formula, but it still must feel like Armored Core, and not "Armored Souls".

We've reached that point where he could make the most fluid mech action shooter, complete with fully destructible environments, but seeing as how he's become accustomed to making games that don't break any boundaries or use the latest tech, I can sorta see him making a new AC, but looking like something from the PS3/4 days.

Yeah, by all means he can keep his design philosophy for Souls games, but when making a new Armored Core, he needs to drop that act and actually make an AC game, not a carbon copy of Souls using the AC brand, because I sure as hell won't be touching an AC souls-like.

It is curious though, why elden ring sales has exploded compared to basically every other 'souls' like. What is the reason? If we look at Sekiro that sold around 5mil as of July 2020 and elden ring has sold over 17.5m in around 8 months. Is it the open world which is more appealing to people? GRRM involvement?

Even tho it's a generic open world, it is exactly how an open world must be: good looking, amazing level design, we go where we want when we want and, more importantly, we do what we want when we want. We're not accompanied by a bot (unless if we want to) and if we want to stop exploring a dungeon to go somewhere else and come back later, we can. That's what almost every other games don't offer and force us to finish what we've started. In term of exploration & immersion, I don't know how it's still possible to have fun with a game like Horizon or even the last gow games after playing ER.

Don't know what they could do next after elden ring, which was perfection.

Just stay being you Hidetaka Miyazaki!

Banger after banger whatever this dude directs!

When I see people acclaiming what God of War has become, I wouldn't be surprised that people would be happy if Souls games became narrative games with our character being accompanied by a bot talking to us all the time and with emotional sequences to make kids cry... I just hope it's NEVER gonna happen.

In ER I would ask some animation while getting the maps.

Well, considering every game he's made since Demon's Souls has been on my favourite game list, I gotta say he should just keep doing what he's doing. I always want more!

Same here. Guy is a genius, "Souls" is the most influent game of the 2010's and Elden Ring is king of High Fantasy games, the best ever made.

I think more devs should take this stance. Make what you want to make. Maybe the appeal of big money is always there but his works shows what you are making could be the next big thing.

I mean there are def more devs out there making gamesthey want to make, but at the same time I'm seeing them making games that are also selling trends, hence why I'm seeing next to nowt for RTS/Iso ARPG's compared to say, shooters/Souls-likes/turn based/card games/point n' clicks.

When public is satisfied with your offer there is little reason to change.

Literally chasing sales as From stopped making the kind of games they used to and have only been makjngs Souls like games for the past decade. They are only chasing sales now