The Nintendo Switch was the best-selling console during Black Friday week in the UK, according to GfK data reported by GamesIndustry.

The Switch accounted for 42 percent of all console's sold during Black Friday week as it was helped by a bundle that included a copy of Mario Kart 8 Deluxe and three months of Nintendo Switch Online. However, sales were down compared to last year.

The Xbox Series X|S came in second place with sales right behind the Switch with 40 percent of consoles sold. Microsoft reduced the price of the Xbox Series S for Black Friday, which helped boost sales. 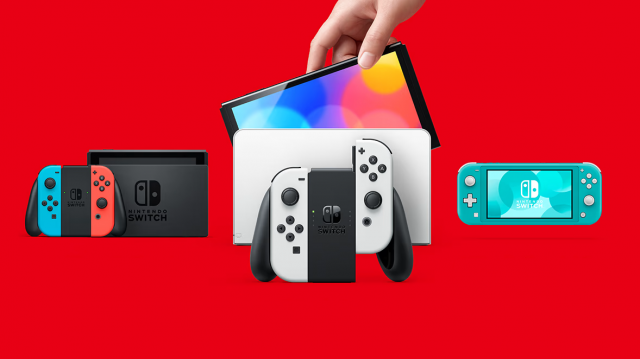 The PS5 was in a distant third with accounting for just 18 percent of all consoles sold. It did see a small discount on Digital Edition.

The total number of consoles sold over Black Friday week are similar to last year in the UK.

All three consoles had their best-selling week of 2022 for the week.

Overall when you include consoles, physical game sales, and accessories, Black Friday 2022 sales are up four percent compared to last year and is the eighth biggest Black Friday in the UK out of the 10 that have taken place.

"Black Friday 2013 week remains the biggest and coincided with the PS4 launch," said Bloch. "Outside of Black Friday weeks, the biggest all-time week on record is back in 2020, which was the PS5 launch and the second week of the Xbox Series X and S."

Black Friday 2022 was the number one week ever for VR revenue in the UK, driven by the Meta Quest 2 bundle that included Resident Evil 4.

"Controllers remained the No.2 gaming accessory," Bloch said. "This was driven in particular by Microsoft's controller deals and strong hardware sales for all three consoles, which drove controller take-up. It was the best controller week since Black Friday 2019."

what happened to the 3.2 million in stock?

Went to US which has better value for its currency the euro and the pound even more was till medio november in free fall, also US is closer to China than Europe

I wouldn't be surprised if this is correct. Anecdotally in my part of the US I have been fairly regularly seeing PS5s on shelves in the last week or two. It seems like they are out there if you want them and are in the US. Their prices on eBay have also cratered here.

I think you are right, the price of the PS5 in UK is 480 pounds and after VAT is around 384 pounds which converted to USD is around 470.

Every people buying a PS5 (disc version) in the US is paying USD 499 (without tax).

Xbox won black friday in the US this year :)

Xbox won black friday in the US.

There's really no need for a Switch successor if the current system still outsells the competitors.

eventually everyone who wants one will have one, maybe 2, then a new system is needed.

The reason to replace systems is SW sales not HW sales, but from what we know SW is also holding quite strong.

Ouuuuch for Sony!! Wow. Sounds like switch did well as always, xbox got a huge boost thanks to big discount, and playstation got clobbered.

Sony: We need the money to stay afloat
MS (Phil Spencer recently: "We lose between $100-$200 per console sold)": Let's lose about $200-$250 for every console sold by heavy discounting the box.
Which one makes more sense to you, financially?

Software is where the money is made buddy. You sell hardware to sell the software. You don't sell the hardware to make a fortune on the hardware. So financially, MS by a long shot. It's the whole reason why these companies give big discounts on the holidays. They want to gain a ton of new people who will buy their software. Sony dropped the ball big time either by not offering discounts or not having the stock available or just people not being interested in the system.

Mmmm, let's see, selling a million units in BF and losing about $200 million, that's about 3.3 million games MORE to be sold just to make up the loss in console sales.

Is Sony losing money by selling the PS5?

I believe they said they did again because the price of recourses and components increased a lot.

Yes, but now they increased the price in all markets but the US.

That should only ever matter to a shareholder or someone who holds substantial stock in those companies. For a consumer the only question that should be asked is which is being more consumer friendly.

Both companies made decisions that best suit their situation. No mistakes were made by either.

im sure microsoft knows what they are doing!

When you are making billions from other parts of the company that far outweigh the losses of another, sometimes it's worth taking the risk. Sony don't have that luxury.

What makes sense for the company that can afford to take a loses not Sony to make deep discounts.so yeah makes sense Microsoft is basically a one man treasury with more money then most countries military budgets for the year . Not USA budget of course lol

In the U.K.? I’m a big Xbox fan an all but in the U.K.? I thought in the title it said USA sales but no . What a surprise good job on the sales must be the gamepass fever going around

Gamepass fever or no one can find a PS5?

They're selling the S at a steep discount, plus the UK probably didn't have a lot of PS5 stock.

In order of importance,big price drop 1st , no ps5 stock , and then gamepass . Though just because I put gp last doesn’t mean it’s not important. Next month monster Hunter comes to gamepass . Not a fan but I know it’s a big game . But you are right that deep discount is tempting and helped a lot

I imagine this is at least partially due to stock issues. I'm sure the very attractive offers on a Series S are helping Xbox sales. But I'm also sure PlayStation sales would be much higher if they were always available.

That said, here in the US, I was able to walk into a Target and buy a PlayStation 5 off the shelf Sunday evening. It was the first and only place I attempted to get one. That's just one anecdotal case obviously, but it leads me to believe that PlayStation stock isn't super terrible in the US. There were still units in stock after the entire Black Friday weekend, at least at this particular Target. And, there were multiple units available. The guy at the electronics counter said "we have a couple left". So, it wasn't luck that I happened to walk in right after somebody returned one.

Playstation wasn't on offer, anywhere. Switch and Series S were. This isn't a surprising result.

Great result for switch. Interesting that since Sony put the PS5 in price they seem easier to get hold of. Shopto never sold out and were readily available. Great to see all three consoles doing well overall, clearly a market for all to survive.

Did UK stock of PS5 been low? There is no mention on the article about it being sold out. Anyway very strong Xbox week.

Mostly S sales, for £199 it was a steal for people on low incomes.

It seems that all the available PS5 were put to be bought in the GOW release week...

I think that was not a good move.

Why? they sell out of a system and an attached digital game at full price, seems like more profit this way.

Amazon still has a lot of ps5 stock bundled with gow. It seems like people are holdingoff for only a ps5. Strange.

They don’t have them now.

All the available PS5s? The PS5 sold more in the Black Friday week than the GoW launch week.

Not even fair including the switch lol!
Of course they mass produced already

Yeah... sorry... Black Friday isn't really a thing outside America. Black Friday is after Thanksgiving which is an American holiday. In the UK, it's just another week day. Some shops like to advertise that it is Black Friday, but I don't think anyone really notices. Certainly the prices don't seem to change...

It's not as big, but it is definitely a thing

That is why black friday was and is among the biggest sale week for consoles in the UK? Because No one know and care? Interesting.

I'm the manager of one of Germany's biggest warehouse and I can tell you that we sold a lot more than normally in the Black Friday week. The products my warehouse has sold around 5x as good as in a normal week. We don't have consoles stored in "my" warehouse, though.

All the poor F**kers with their "next gen" series S. Once the shackles of last gen are gone it will be 100% the 30fps machine.
They'll be getting what they paid for then.

And believe it or not a lot of people don’t care. As long as you can play no one cares . Hell some people don’t even know . And I doubt it will be a 30fps machine 100%.maybe 80 %. you are exaggerating.and and when it comes a time people want something better than they can trade the series s and get a series x hell this years cod seems to do fine in 60fps

Case in point the Callisto Protocall launching today at 30fps and badly.
Enjoy the "next gen" value.

What you call rubbish I call truth. I see a lot of positive comments about series s owners still happy. Case in point cod mw2 1080p 90fps or 60fps for 1440, same with warzone 2 which I can enjoy at 1440 60fps I believe . Yeah most people are still enjoying the entry point to next gen and when they want something more powerful then they can get a Xbox series x or a pc . 2022 still enjoying next gen ;)

Marginally better than xbox one is not an upgrade. Xbots have been hoodwinked

Lol marginally? You know what’s not an upgrade tlof remake that they are seeking for 70$ that’s a good example of small to marginally different. Going from playing warzone 2 in 900p 50sh fps to 1440 in 60 …. Sorry pony’s got ripped off with. as Xbox were u can choose to get the entry point Xbox or get the 20% stronger xbox for the same price if not cheaper than a ps5 since Sony jack up the price. So looks like it’s pony that’s getting ripped off ;) xbox series x for 500 at 12tflops in power ps5 10tflops in power for 500 or more in some areas. Sorry u got ripped bro lol oh let’s not forget gamepass with gp I’m saving a shit tone over ps users so how are Xbox users getting ripped :) I’m waiting I bet it’s a lousy excuse/response

You guys should stick to twitter, where your kind’s console warring toxicity is rampant.

I agree with this! The S will be an anchor on gaming that MS will not be able to pull up!!!

Add your reply...you know nothing of optimizing don’t you? Xbox series is a gpu equivalent to a gtx 1660 and most pc games has the old Gtx 970 a a minimum requirement. If you want to talk on who is dragging down shit is PlayStation isn’t god of war still multiplat ? Yes it is so by your logic ps4 is holding back gaming . I agree with that lol