Sony Interactive Entertainment on the PlayStation Blog, following a leak, has revealed the PlayStation Plus monthly games for December 2022. The games will be available starting on Tuesday, December 6 until Monday, January 2, 2023.

The PlayStation Plus Extra and Premium Game Catalog lineup for December will be announced later this month. 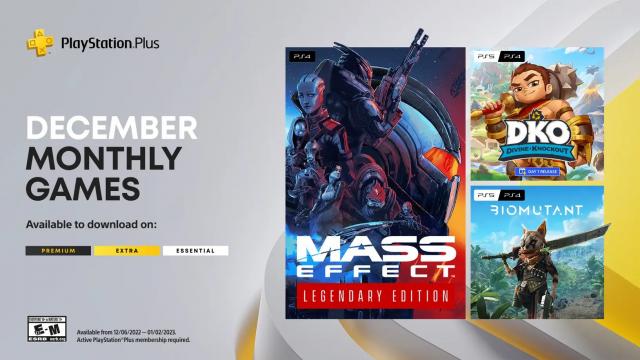 Launching directly into PlayStation Plus, this third-person platform fighter adds a whole new dimension to the genre. Damage enemies to make them vulnerable, then smash them out of the arena in a unique, third-person perspective. Choose from one of 10 playable gods to hurl boulders as Hercules or wield Mjolnir as Thor. Then battle across diverse arenas with their own mechanics to master. Play 3v3 Arcade mode with friends to explore a variety of game modes, or duke it out in hardcore 1v1 and 2v2 Duels. DKO features cross-play and cross-progression. This Founder’s Edition unlocks DKO and bonus content for the game, plus a DKO-inspired skin in Smite.

Relive the legend of Commander Shepard in the highly acclaimed Mass Effect trilogy with the Mass Effect Legendary Edition. Includes single-player base content and over 40 DLC from Mass Effect, Mass Effect 2, and Mass Effect 3 games, including promo weapons, armours and packs — remastered and optimized for 4K Ultra HD. Experience an amazingly rich and detailed universe where your decisions have profound consequences on the action and the outcome.

Mix melee, shooting and mutant ability action in this open-world, post-apocalyptic kung-fu fable RPG. A plague is ruining the land and the Tree-of-Life is bleeding death from its roots. The Tribes stand divided. Explore a world in turmoil and define its fate – will you be its savior or lead it to an even darker destiny? Re-code your genetic structure to change the way you look and play, Mix and match parts to create your own unique slash, crush and pierce melee weapons, revolvers, rifles, shotguns and more. The PS5 version features native 4K and HDR support and three different graphics modes.

PlayStation Plus members have until Monday December 5 to add Nioh 2, Lego Harry Potter Collection, Heavenly Bodies to their game library.

This month, PlayStation Plus members can earn additional points for playing through our PlayStation Stars loyalty program. Simply redeem, download and play titles from the December Monthly Games line up, and get 50 points.

Also, check out our PlayStation Plus monthly games-inspired playlist on Spotify, which will be refreshed with new songs every month.

Can't say they are games that attract me, but a solid month all things considered.

For me ME Collection is worth price of admission alone, 150 hours minimum of RPG gameplay.... and some dodgy vehicle stuff between. :P

I need to try ME, so yes that would be value added, although I never really wished the opportunity to play it before, but well for free I may try.

Out of interest, what is your basis 'Bioware's writing' on? What games did you not enjoy? After ME first came out in 2007, their game library isn't exactly substantial.

Well Leynos might like me have heard that a new studio called Bioware had their first game coming out a Mech combat game called Shattered Steel and got excited about it's having deformable terrain, but alas also like me ended up staying away upon hearing the buzz going around at the time that the writing wasn't great, but unlike me Leynos is a man known for his resolve and gives no second chances .?

I did like Dragon Age Origings but DAI is awful. DA2 was awful. Didn't like Jade Empire at all. I have only seen an LP of ME3 and MEA and the writing sucked.

Interesting thanks. I've played all DA and ME games, and character writing is good in most the games but I can agree with struggle with large scope plotlines. This is why ME is so good because simple story, great characters, when in ME3, it was complex story, okay characters. For DA the lead writer has now left, he's at another studio so no sure where the main narrative in DA:D will go but DA:I's overal plot, even though I love the game, is honestly, terrible but the characters to me keep it together.