Dead Space and Hi-Fi Rush Debut on the Steam Charts

"We want to thank all Victoria 3 players!," reads a tweet from the official Victoria 3 Twitter account. "With 500,000 games sold since it's release a little over a month ago, this is one of the most successful Paradox launches ever!"

We want to thank all Victoria 3 players! With 500k games sold since it's release a little over a month ago, this is one of the most successful Paradox launches ever! pic.twitter.com/jerZ5fi10P

The railroad and the telegraph. Steamships and the birth of flight. Mass conscription, emancipation and the campaign for women’s rights. The Victorian Age saw a world transformed by new technology, new philosophies and new ways of doing politics. This tumultuous century springs to new life in Victoria 3, a grand strategy game from Paradox Development Studio.

After years of community requests and curiosity about the future of one of the company’s iconic games, Victoria 3 is instantly one of the most highly anticipated grand strategy games in Paradox’s history. Victoria 3 is a society simulator set in a time of great change. Track the needs and desires of national populations, each group with its own political and material preferences. Conservative factions may resist political reform as growing numbers of tradespeople and intellectuals push for a greater say in how the nation is run. Trade a wide range of goods on a global scale to make sure that needs are met at home, because if people are hungry and disenfranchised, revolution beckons.

Cultural, economic and ideological divisions compete for power and resources in one of Paradox’s most detailed historical worlds.

Nurture your population, educating it and preparing it for the future, guaranteeing their prosperity and improving their happiness.

Wonders of the Industrial Age

Scientific and social progress give you the chance to improve the lives of your citizens.

Import goods to keep costs low, export goods to enrich your citizens, and then tax that wealth to advance your plans.

Maintain harmonious relations with your neighbors or provoke a crisis to grab valuable resources or force open new markets.

Manage competing interests in your government, opening up new reforms but risking revolution if key voices are not heard.

Cities grow and factories darken the landscape on a beautifully drawn map of the 19th century globe. Play any of dozens of nations from 183 and try to claim your place in the sun. 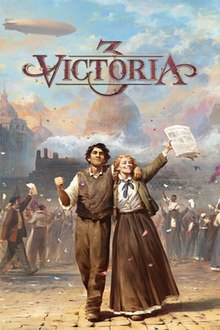