For a series that hasn't been active since 1995, Turrican has enjoyed a lot of attention lately. Last year saw the release of Turrican Flashback, a compilation of four Turrican titles enhanced with some quality of life fixes and customization options, and earlier this year witnessed the long-awaited arrival of the physical version of Turrican Anthology, split into two volumes. That two-part anthology arrived on Switch and PS4 in digital format last week, and covers five mainline games, several "director's cuts" and score attack modes, and customization options that go beyond the already impressive assortment in the Flashback anthology.

This line-up is technically more exclusive than the one in Vol. I. While that collection shared three out of five games in common with last year's Turrican Flashback, Vol. II shares only one out of five — Mega Turrican. That's the good news. The bad news is that three of the titles in this second volume are essentially the same. Turrican 3, which sounds like a unique title, is actually an Amiga port of the Genesis run-and-gun game Mega Turrican. It's essentially the same game, although some backgrounds, animations, and graphical flourishes were lost in the porting process. In short, Turrican 3 is redundant, even if it's a nice addition for franchise historians. 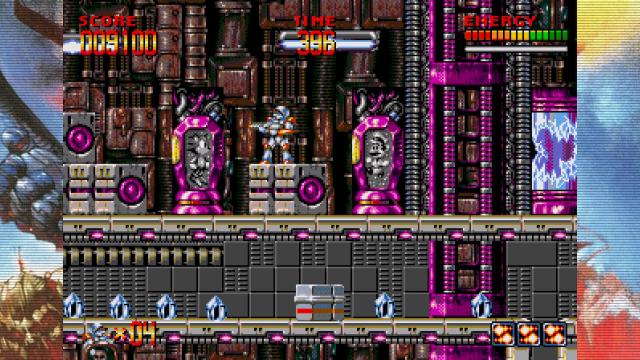 Mega Turrican Director's Cut is, likewise, redundant. Where the "director's cut" of Super Turrican in Vol. I added previously unpublished material, including a new level, the definitive version of Mega Turrican makes relatively modest changes. It adds in a cheeky Easter egg that pokes fun at Nintendo and Sega mascots, and slots the secret stage into the regular line-up. That's it. The truth is that Mega Turrican is so good it doesn't need major alterations.

Outside of the three versions of Mega Turrican, this second volume of Turrican Anthology features Super Turrican Score Attack and Super Turrican 2. The score attack mode is very similar to the one in Vol. I. It asks players to move through a large remixed level from Super Turrican, collecting as many items as they can and reaching the exit as quickly as possible. It's a decent diversion, although not as habit-forming as Mega Turrican Score Attack. The level here is less interesting, and the absence of the Bionic Commando-esque Plasma Rope makes everything feel a little flatter. 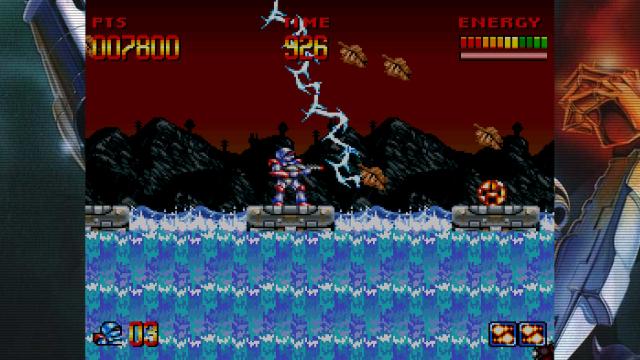 That brings us to Super Turrican 2, the game that truly distinguishes Turrican Anthology from Turrican Flashback. It's absolutely wonderful. While it represents a huge departure from the original Turrican template — large maze-like levels and careful exploration are replaced by linear stages and explosive set-pieces — it remains an all-time great run-and-gun game, on par with the classics of the era from Konami and Treasure. Looking back, it's staggering how many ideas and mechanics Factor 5 crammed into the game. In one moment you're riding a dune buggy over sandy terrain; in the next you're hanging from a hover jet; and in the next you're swinging across the underside of a space frigate.

Gameplay aside, Super Turrican 2 is worth playing for its visuals alone. It's one of the most graphically-impressive SNES games ever made, thanks in part to some show-stopping Mode 7 stages and a vertically-scrolling shoot-'em-up section with perspective distortion in the style of Axelay. 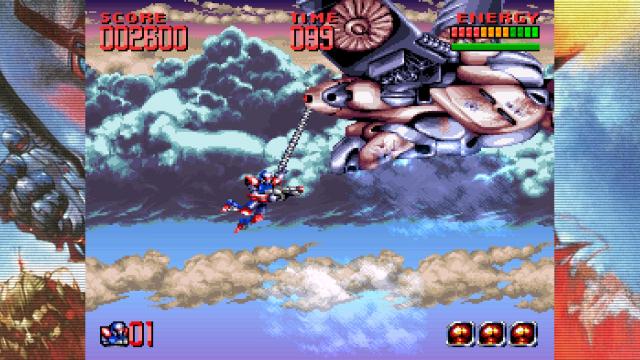 In addition to five games, Vol. II benefits from the slew of special options and bonus features from Vol. I, including display options, save states, rewind, digital manuals, concept art, and music players. And, of course, you can pick among several control schemes and soundtracks. The exceptional overlay map option is also present here, although less essential with Mega Turrican and Super Turrican 2, the two most linear games in the series. In any event, Developer Ratalaika Games really outdid itself with this anthology.

Turrican Anthology Vol. II, which retails for $34.99, is a difficult collection to judge. On one hand, three versions of Mega Turrican is too much, despite the greatness of the game, and the Super Turrican score attack mode feels like a lesser version of the one in the other volume. On the other hand, the special features are extraordinary and Super Turrican 2 is required playing for any serious run-and-gun fan. Altogether, Vol. II falls into the same category as Vol. I: a collection of deep cuts better suited to completionists and Turrican loyalists than the everyday player.

This review is based on a digital copy of Turrican Anthology Vol. II for the NS, provided by the publisher.

I have fond memories of Turrican from the Commodore 64 and the Amiga. 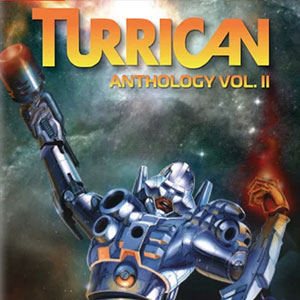