Tweet
by Daniel Parker , posted on 01 September 2021 / 1,793 Views
During the fifth generation of gaming consoles, we saw a major push towards 3D gaming.  Some believed graphics were paramount and 2D gaming was just a simple thing of the past.  As time went on, however, more and more of those 3D games became unplayable by modern standards.  Eventually, we'd not only see a return to many new 2D games on home consoles but also to titles that would dare to reduce colors and pixel resolutions, adopting the look of a much simpler time.
Blaster Master Zero 3 is one such type of game.  It limits itself to some of the Nintendo Entertainment System's technical limitations where this makes sense, but it also does quite a bit that wouldn't have been possible three decades ago.  The title's overall color palette appears to be limited to the original 64 color range of the NES, however many of the sprites that make up the various enemies and bosses boast much more detail and consist of more than three colors (in most cases), especially in the game's many cut scenes. 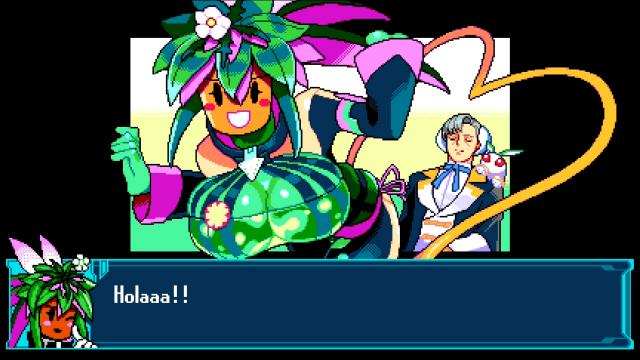 In addition to retro-inspired but polished visuals, the chiptune music and sound effects are crisp and clean, without segments of music dropping out due to a limit of sound channels.  So no matter what's happening on screen, the music will always sound the way it was originally intended.  I think I can speak for everyone in saying that, for those of us who remember what it was like to actually play on retro consoles, Blaster Master Zero 3 does a fantastic job of giving us an 8-bit gaming experience while not technically being 8-bit. 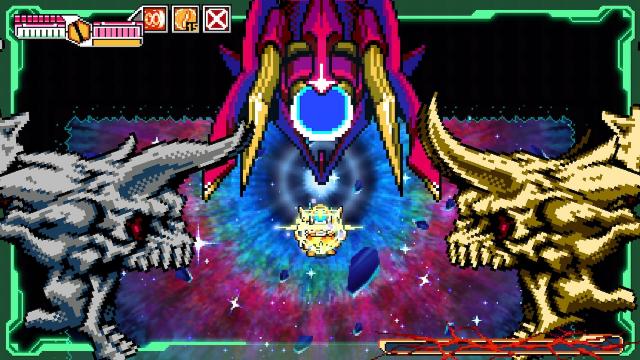 Without a doubt, however, the best part of Blaster Master Zero 3 is the gameplay.  Throughout sections spanning multiple planets, you'll play through two main gameplay types.  Most areas are side-scrolling platforming sections, where you use your tank (the G-Sophia SV) to navigate the level.  As you work through the game you'll acquire various new weapons and abilities that upgrade for your tank, most of which are required to progress through certain sections of the title.
In these platforming areas, you're also given the ability to jump out of your vehicle at any time, which is mostly used for puzzle solving.  You need be careful when exiting your vehicle though, as not only will you deal less damage to enemies while taking more damage than your tank, but you can also die from fall damage, which feels a bit cheap at times.  That's despite having access to a jetpack at all times to mitigate fall damage because what seems to be a shortfall will often be enough to send you back to the previous checkpoint. 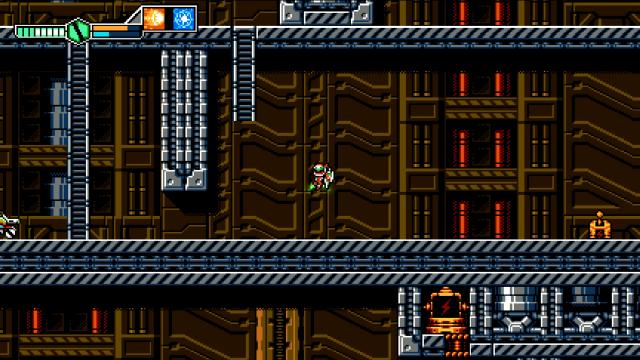 The gameplay is mixed up even further when you head into one of the many dungeons scattered throughout the game.  Here, Blaster Master Zero 3 adopts a top-down perspective, with large, detailed character sprites, and the ability to move in eight directions.  You're also given access to a myriad of unique abilities and weapons that can only be used in the dungeons.  As you traverse these areas you'll have access to your primary and sub-weapons, the G-Rifle and the R-Blaster.  While the G-Rifle features five varying weapon types with unlimited ammo, for handling different enemies, the R-Blaster's weapon types have limited ammo and must be discovered on your travels.  Moreover, a power meter depletes along with your health upon taking damage, which makes avoiding damage crucial, as even if there are health pick-ups scattered all around you, coming out of a confrontation dealing less damage is obviously unfavorable.
Since there are so many ways to destroy the mutants in the game, the use of most of these attacks seems to simply come down to player preference.  Some weapon types do have specific use cases, like tearing down breakable walls or being able to bypass walls entirely, but you should be able to get by most of the time with your personal weapon of choice.  But even though there are plenty of ways to play offensively, that doesn't mean you're without defensive maneuvers, such as the Spin Dash, which is similar to dashing in the Mega Man X series (the two main differences being it has its own resource meter and you cannot attack while using the Spin Dash).  It's mainly used for speeding through an area or avoiding enemy attacks, despite sharing its name with the offensive attack in the Sonic the Hedgehog games. 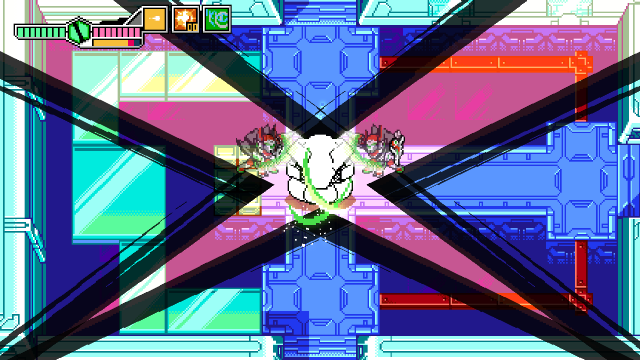 Finally, there's also the ability to perform counter-attacks, which can be done for a brief period after an enemy attack.  Using these counter-attacks consumes resources from the same stamina meter as the Spin Dash, so it's important to be mindful of that if you're intending to use a counter.
With so much going on, calling the aforementioned sections "dungeons" feels a little bit wrong; it's not as if you're stepping into Goro's Lair from Mortal Kombat, most of the dungeons in Blaster Master Zero 3 are bright and colorful.  Plus, given the added play options you get while exploring them, along with the eight-way movement, they're usually something to look forward to.  The one drawback to them is that, when you die, you'll have to restart the area from the last checkpoint, which means giving up all of your progress since entering the dungeon.  It is really aggravating spending so much time progressing - sometimes as long as 15 minutes - only to have it all erased. 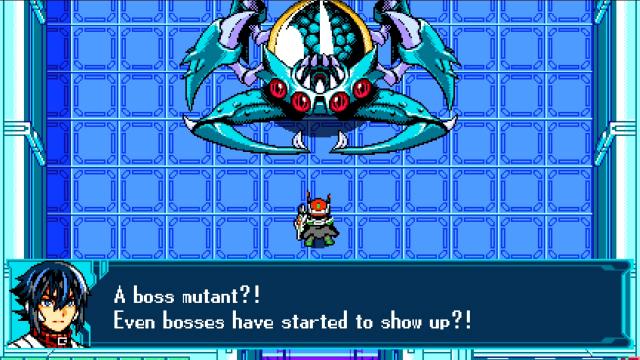 Throughout both the side-scrolling and dungeon sections, you'll come across numerous bosses.  Amazingly, each one feels perfectly balanced.  None of them are so difficult that you cannot figure out their attack patterns or have cryptic strategies that you'll need a guide to figure out.  Nor are they endurance matches that overstay their welcome long after you've figured them out.  The designs of these bosses are quite unique too, with the Dual Kirkal perhaps being the best designed of the lot, although the Adminator Z-21 is probably the most fun to play against, despite basically being an iron box and the least visually appealing boss in the entire game.
As a bonus, some bosses have an additional phase, which takes place within the super dimension - a warped alternate reality that can be visited after going through dimensional ruptures. These second phases are usually much easier than the initial phase, however, if a boss manages to kill you during a second phase then you'll have to restart the entire confrontation over again.  The dimensional ruptures also appear in many other areas of the game, and each planet features a unique gimmick when traveling through its alternate dimension, providing yet another layer to the gameplay. 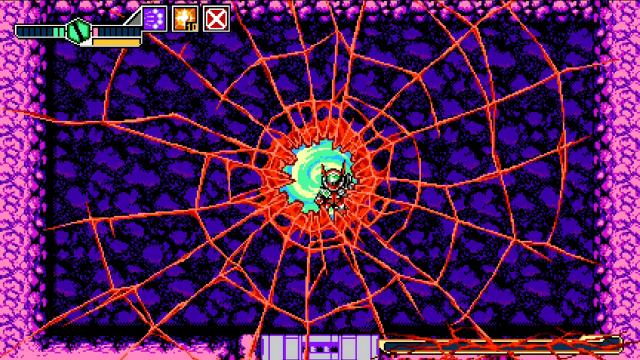 If you're not familiar with any other entry in the Blaster Master franchise up to now then the story here can be a bit overwhelming, not least because it's a direct continuation of the events from Blaster Master Zero 2.  It may take some time to become familiar with the characters and to understand everything that's going on, but even if this is your introduction to the series then you should get along just fine.  There are so many enjoyable gameplay elements that, as long as you're making progress and not aimlessly wandering around, it's a great experience.
The biggest obstacle to progressing through Blaster Master Zero 3 isn't any of the boss encounters or puzzles, but actually the map of all things.  It's a bit difficult to decipher.  One of the reasons for this is that it's displayed on a grid of squares, despite the game itself being displayed on a 16x9 rectangle, making it hard to read without using the icon list, as all of the walls and paths on the map don't seem to match up with the actual play area.  It also would have been great if there was an option to have the map display during regular gameplay without the need to use the pause menu as well. 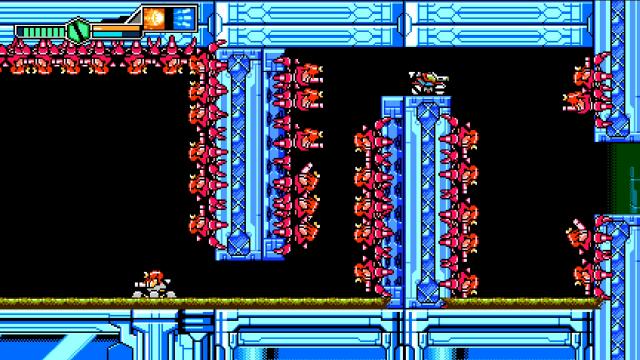 One other issue I had with Blaster Master Zero 3 was that I was somehow able to entirely bypass a particular area where you're supposed to use camouflage, thanks to invincibility frames and perhaps a bit of luck.  Doing so did nothing but confuse me, as I was able to access a dungeon but couldn't figure out what I was supposed to do there, as I couldn't interact with the computer terminal.  I ended up becoming so lost and confused that I needed to use a guide to find the one path I'd inadvertently glanced over.
Blaster Master Zero 3 is almost excellent for anyone who's into retro-style games.  There are a few minor issues here and there, from the odd game crashes, to questionable design choices for certain enemies (resembling large power-ups), and even some instant death traps in the super dimension that look like a rope, but silly things like that you'll only fall for once.  It's obviously hard to recommend to someone who's not already a fan of retro-style titles, be they 8-bit, 16-bit, or other similarly stylized pixel art releases, but Blaster Master Zero 3 is still a great game; one that makes me want to explore earlier entries in the franchise in order to see what I've missed out on.

This review is based on a digital copy of Blaster Master Zero 3 for the NS, provided by the publisher.