Mario Golf: Super Rush is a video game. It features Mario characters (and Donkey Kong). You select one of these Mario characters (or Donkey Kong) and use them to hit a ball towards a hole. You can play online, with friends or strangers. If this introduction sounds bland, then don’t worry, because it’s preparing you for exactly the kind of experience you’ll get from this game.

Actually that might be somewhat unfair. Super Rush has a few clever ideas. Along with your traditional, turn-based golf mode made for people who want all the excitement of walking around and occasionally tapping a ball around without any of the benefits of minimal exercise that normally accompany it, there are a couple of new modes that shake things up quite nicely. Golf Battle is a neat little idea that puts players together in a nine hole course. The catch is that your task is to complete three holes as quickly as possible, so players are forced to think strategically about which holes to go after. 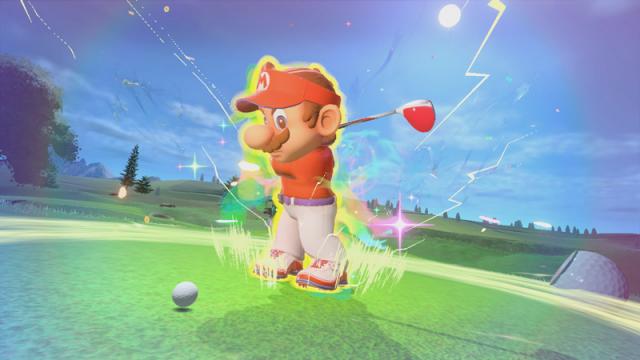 A second interesting twist on standard gameplay is found in Speed Golf, which in my mind is how golf should be played. Basically this is golf with a timer; once you hit the ball, the task is to get it in the hole as quickly as possible. Additional strokes do add a time penalty, though, so you have to juggle being fast without being reckless. I do wish there was more variety to what you can do while you're chasing after your ball; you can only really choose to run or do a character specific faster run that drains stamina substantially, but it’s a fun diversion.

However, this brings us to the ultimate problem underlying Super Rush. While these are some neat ideas, none of them feel like anything more than diversions. Golf Battle is an intriguing blend of strategy and general golf gameplay, but it only has two courses and it doesn’t take long to figure out the optimal strategies. Speed Golf is fun at first, but lacks meaningful depth and quickly loses steam after about ten or so holes of samey gameplay. 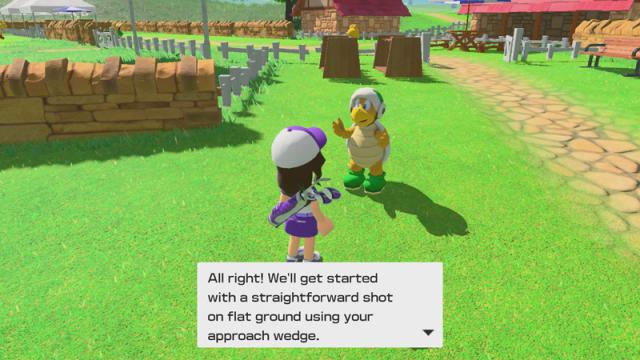 There’s also a story mode, which sees the player create a Mii and go through a series of golf-based challenges to earn progressively higher ranking badges. This story mode features what I would consider the most compelling mode in the game: XC (Cross Country) Golf. XC golf has the turn based format of normal golf, but you’re given a limited number of turns to get through all the holes on a map. This introduces an element of decision making; planning a route to get through all the holes as efficiently as possible. Things are complicated even more by the presence of a myriad of hazards dotting the course.

And since this is the most interesting and compelling mode in Super Rush, it is of course locked to story mode. You cannot play it with friends, either locally or online, which just feels like a bizarre decision. Perhaps the limited turn restriction would make multiplayer frustrating, but you could very easily just dump that and have it operate on the standard “fewest turns wins” metric that every other mode uses. You can’t play it as a single player mode either, which makes it hard to give Super Rush any points for it. 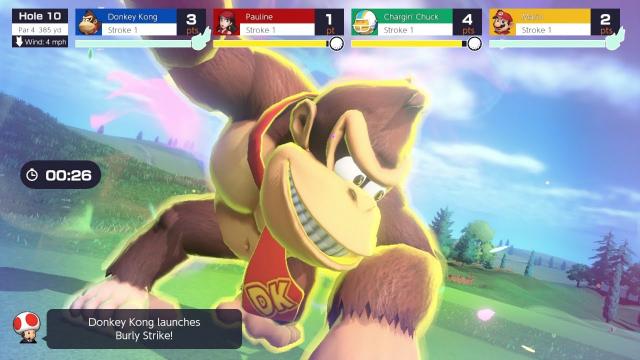 Besides that, there isn’t a lot going for the story mode. It serves as a means predominantly to tutorialize the core gameplay and different modes (making XC Golf being locked to story mode exclusively even stranger). There’s some character customization that adds a not unwelcome touch; as you progress through the mode you can fiddle with stats to give your character more power, speed, stamina, etc. It doesn’t stop things from ultimately being pretty bland, but it at least doesn’t make things worse. Outside of the one spark that is the XC Golf stage, it's fairly uninteresting.

The online is serviceable enough. You can peruse a selection of lobbies from strangers or create your own, and edit settings like the game mode, number of holes, etc. I think it would have been nicer to have had a selection of quick play options (i.e. just jump in and immediately be able to play speed golf), but given how bad Nintendo’s online offerings have been in recent memory I suppose I should be grateful for what does exist. On the plus side it runs somewhat smoothly and I can consistently choose what ruleset I get to play with, unlike some games I could Smash Bros...I mean mention. 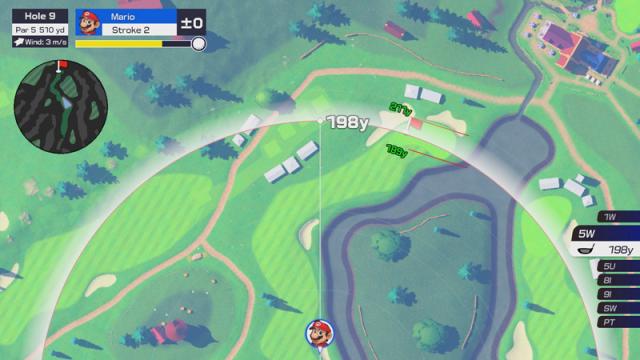 Aesthetically, Super Rush is also pretty darn ugly when it’s not using pre-rendered cut scenes. Some of the character outfits are fun to look at, but the actual character models look like they were taken from a Wii game and had the textures buffed up a bit. Harping on an individual character might be weird, but I’m not entirely sure they didn’t just lift Donkey Kong’s model from Donkey Kong Country Returns. They look eerily similar, right down to the weird hair that looks more like Donkey Kong is wearing a big fraying brown coat rather than fur.

At some level I feel like I should be more critical of Mario Golf: Super Rush. A $60 game that I was bored of playing inside of six hours doesn't inspire confidence, especially when playing with friends doesn't seem to boost excitement for long. But I can’t even motivate myself to get upset at the game; it’s just boring. There are a few interesting ideas with some potential but they're never get put to full use, and there's nowhere near enough content to justify the asking price. It's a title I would have briefly played and then probably immediately forgotten about were it not for having to write this review. There's nothing about it that inspires, challenges, or even offends. 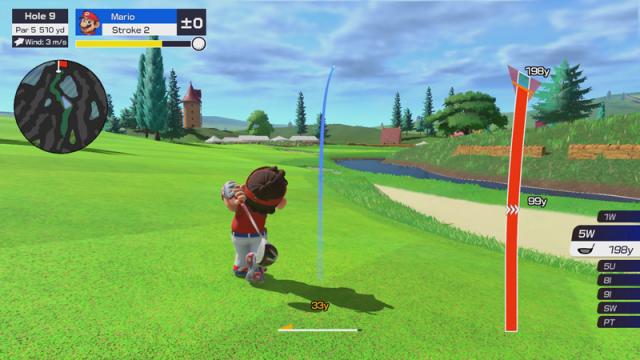 Initially I was going to say it feels hard to call Super Rush a bad game, since there’s nothing especially bad about it (except the aforementioned price to content ratio). However, it’s hard to imagine finding anyone who I would recommend it to, with the possible exception of someone really desperate to see Waluigi dressed like Al Capone, running full speed through a Mardi Gras parade. And maybe that alone does make it bad. As well as boring. Really, really boring.

This review is based on a copy of Mario Golf: Super Rush for the NS

Main problems are they didn't fully develop out the motion control interface so the best way to play golf games is hampered, not enough content at launch, and the courses aren't particularly interesting. If courses were more interesting and took on more the form of a golf/mario-platforming mix then the whole speed golf mode of traversing the courses would be a lot more interesting and fun. In general the game is just alright all over because they didn't bother pushing anything into really interesting territory.

If they just completed the motion controls, build out the adventure mode into a full on game, and made the courses (or at least just in speed golf mode) more like a 3D Mario level turned into a golf course, it'd probably be an excellent game once they add a couple more courses. But sadly they went with the safe mediocre level of effort and gave us something just okay that is fun multiplayer but overall not a memorable experience.

The motion controls were the “make or break” for me.

I'll see myself out.

That pun was really sub-par.

That's a compliment in golf terms, so I'll take it. :)

"You select one of these Mario characters (or Donkey Kong) and use them to hit a ball towards a hole."

That actually kind of seems like exactly the main thing one would expect or want from a game with Mario Golf in the title.

I mean I personally wouldn't have been disappointed if all of the Mario characters had been replaced with the cast of Baywatch, but hey.

Anyway the point of that paragraph was more stating incredibly obvious information as blandly as possible to contrast it with the overall boring nature of the game, so yes, that is in fact the point.

I hope this game will end up like Splatoon or Mario Tennis Aces – small content at launch and very well supported during the first year with a lot of content being added.

It's likely. But I wouldn't expect as much as something like Splatoon. Probably a few characters and 2-3 courses.

It should be like Tennis Aces, so quite a few new characters.

It met my expectations for the most part. Fun enough that I'm still playing it every few days. I think part of the problem is that it's a golf game. The consensus seems to be that it's mechanically sound but lacking content. The issue with more content is that it only prolongs the game a tiny bit more.