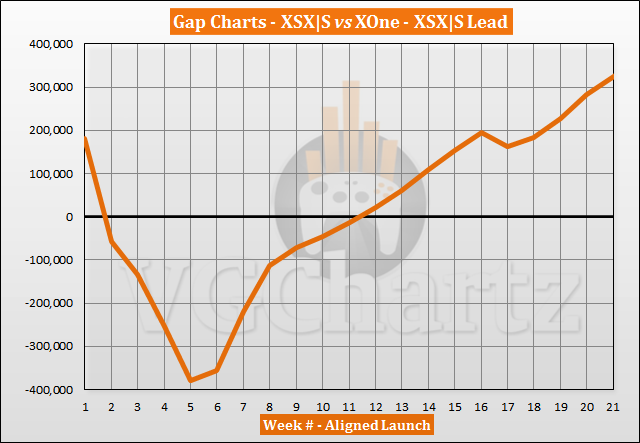 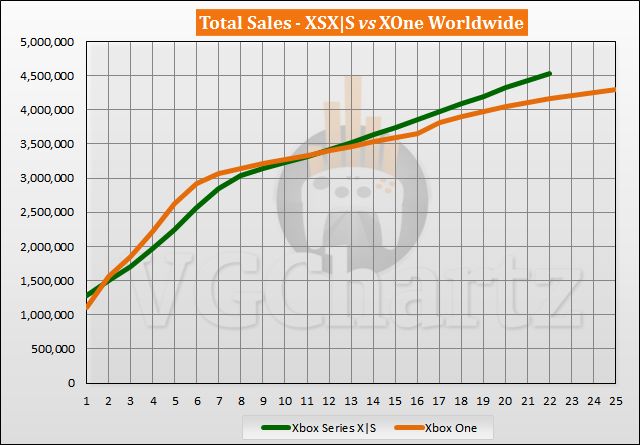 Even though it's early into the gen, I think it's a pretty safe bet to say the Series X|S will outpace the X1 going forward.

Any idea of where the Series XS sits in comparison to the 360 over the same period?

Global sales after 22 weeks in the market:

One is accelerating slowly and the other slowing down slowly.

not that impressive sadly, with unlimited demand and two different models, vs. Microsoft's worst console ever... should have sold 2 to 1, blame Microsoft for not making enough of them

Series has been selling around 70-80% more weekly units than One for almost two months now and Mike Spencer - Microsoft higher up - already said Xbox stock shortages should stop in June.

so nothing I said was wrong, they beat their worst console launch ever, and they failed to sell half of PS5, and they have two models including a $300 cheap one, look, XBOX is my favorite, but the number manufactured so far is not acceptable

No, literally everything you said is factually wrong. First of all, the Xbox One was their BEST launch ever and they beat it, so now the launch of Xbox Series is the best launch in Xbox history. And they are selling half what PS5 or a little more every week.

Maybe you would have a point about the number of consoles being made if Xbox actually had control of it, but they don't. Regardless, it's still selling better than any Xbox console before it. Just because it's not outselling the Ps5 doesn't mean it's sales are bad. It's about on par where the Switch was, and look at those sales now.

Yep. In fact, it's selling pretty much the same as the Switch launch aligned.

I didn't say that, you are using a straw man fallacy. Typical of you.

Very brave of you to reply to me after you ran away like a coward and ignored me when I showed everyone you are a hack and a liar.

Have you already found the data showing Xbox is not profitable? Go find it, doggy!

I never said you did say that, I'm asking you if you believe this.

And thanks helping my point: you always never actually read what I say and then pretend some stuff never happened. Like the time when I showed you several sources showing Xbox is not profitable, but you keep pretending I never did. So yes, I did. But you never showed me otherwise tho.

You showed ONE source saying Xbox is not profitable and it was ONE article from 2014 that had to be corrected by Forbes, who calculated 2.1 billion profit (7.1 billion revenue and 5 billion costs).

You didn't show any more sources.

Ok either I didn't show you anything by cowardise OR I showed you sources you disputed. But you can't go both ways, you have to choose.

You showed a source. That source showed Xbox was PROFITABLE in 2014. I asked for more sources that say Xbox is not profitable (because that's what you were saying). You never replied.

That's the official timeline in case you lost it.

Can you give me that source from 2014 again ? Cause nobody made profits during the launch of the last gen console, not even Sony

I'm definitely not saying it will sell on par with the switch. My prediction is sales will be roughly around X360 numbers. All I'm saying is that it could become a big seller, especially with the right software. They have the developers now, along with good hardware price ranges. It's only a matter of time before we see some big games like Halo Infinite and Starfield that could really push console sales.

If am totally honest I think as the stock becomes more readily available I think Microsoft is gonna really explode in sales as this gen as I think a lot of people are gonna see that Series S with game pass for £20 a month. Imagine all the soccer mums who go shopping for Johnny to get him a console n instead of spending that 2-300 at Christmas or Black Friday she can keep every penny in her pocket and Johnny not only gets a next gen console he gets so many games that mum never needs to buy another game for him for a very long time