Note: My experience is solely based on playing an Xbox One copy on an Xbox Series X.  Initial reports from Xbox One players (base console or S version) detailed rough technical errors, especially with respect to sub-20 framerates and awful stuttering.  I can’t provide any testimony regarding whether or not those have been fixed yet.

After mulling through products from a smorgasbord of different AAA developers (and support studios in tow), it's nice to enjoy simpler meals from up-and-coming indie studios.  Helmed by a very small crew, developer Mischief comes out of nowhere to flex its writing and design skills with a new walking sim/narrative adventure.  Although Adios does have a few ancillary mechanics, this humble game's primary focus is in examining an old man's past decisions, his regret, and longed-for atonement.  Is it the fond farewell he’d hoped for? 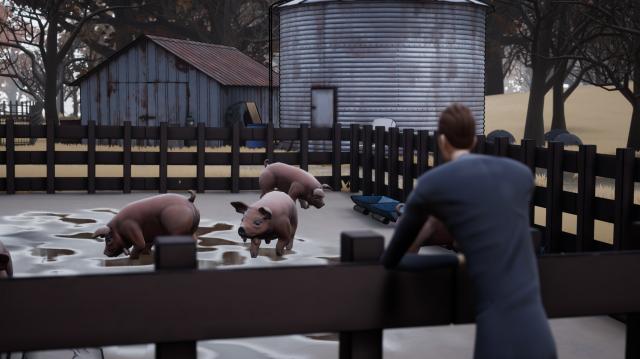 Somewhere out in the pastoral fields of early-90s Kansas, an old pig farmer drinks in the cool air with one singular thought: I want out of this.  Not "retirement" from his normal occupation though; that keeps his spirits up.  No, he's through being the mob's disposal man.  When his old friend/hitman arrives with his latest diced-up victim for pig feed, he gathers the courage to finally tell him.  Knowing the consequences, the hitman helps out around the farm to convince him otherwise.

Adios deserves respect for its unpretentious writing.  Not many words are spoken about his fate because he simply doesn't need to spell it out.  The audience knows as well.  Since so much of the dialogue hinges on the duo's past kinship, their comradery as they go about doing chores and shooting the shit feels natural.  Despite not being on his level, these musings often harkened back to John Steinbeck's To A God Unknown or Cannery Row for me; small talk takes on this grander significance.  The topics can vary in tone and subtext, but the gravity of the farmer’s decision frames his words like a final elegy for the one person who’s willing to listen.

As with dialogue writing, perspective is a crucial aspect to nail down here.  This is where the balance of narrative experience and walking sim is lost.  Since the audience is cognizant of his fate, why are we impelled to navigate scant dialogue options?  Hell, oftentimes the dialogue choices are false ones: one of them has background text that remains white whilst the other two are greyed out; selecting the "wrong" ones just makes him grunt and remove them.  Those options are treated more as responses he considered saying but then reneged on for another.  This artistic choice could be topical for a game development school assignment: does this feature effectively communicate inevitability over a singular predetermined choice or artificially restrain the player to a passive observer who'll lose interest?  I wouldn't be surprised if Adios' commitment receives heaps of praise elsewhere, but I lean towards the latter. 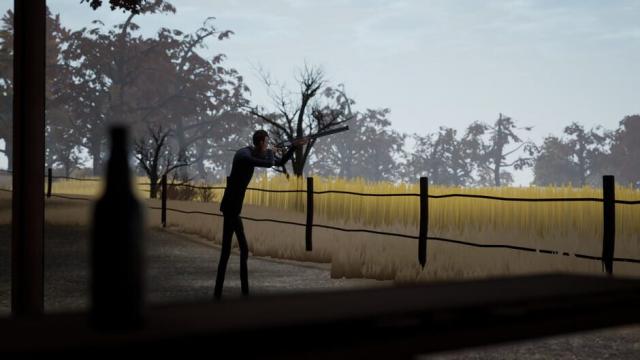 There are other cinematic-esque flairs speckled throughout that feel tonally inconsistent.  Hopping to any of the marked objectives results in a cut-to-black transition with special titles and sound cues – similar to discovering a new area in Control.  Considering the speed of this over-editing, they seem like disguised loading screens for your next gameplay task.  Perhaps they're a resource-inspired decision or a purely artistic one; regardless of intent, these distractions damage the special atmosphere.  Decelerating the journey from point A to point B actually complements the laidback Midwestern milieu, awarding players more room to hang on The Farmer's last words.  Mischief seems worried that gamers' goldfish-level attention spans will distract them without this silly extra flair.

When examining each element, Adios' story feels in conflict with its design and structure.  Which is a shame because the comradery between The Farmer and The Hitman works quite well; further, the delivery by their respective actors, Rick Zieff and D.C. Douglas, may be up there with the year's best.  Sometimes a lean script lends greater creativity to the voice talent.  Despite these factors, the struggle of the plot's inevitability and maintaining player interest leads the team down contradictory paths.  A rookie's first hit typically has some errors.

While there's often this contention regarding art games, gameplay shouldn't be outright disregarded.  After all, we're past the Dear Esther phase of this trend.  What Adios tends to employ is a simplistic gameplay vignette collection, like shoveling manure or making dinner, in order to do something while The Farmer talks about the good 'ole days.  It's a relatively easy staple that's been done for a while.  Problem is hardly any interactive ideas here feel worthwhile.  Whether the mini-games are fishing, tending to animals, skeet shooting, or so on, you rarely feel the weight or purpose that Mischief is trying to drive home.  It's particularly odd how much freedom you're provided during conversation too; you can putz around with a soda vending machine and throw cans around the room while listening to the two’s dialogue about hobbies.  Attention-splitting shenanigans take up the meat of the game too.  That's in part because the times you're just focused on yourself are typically finished in a flash.  You'd think a fishing mini-game – of all things – would be more patient and reflective than a ten-second fight managing your line’s tension. 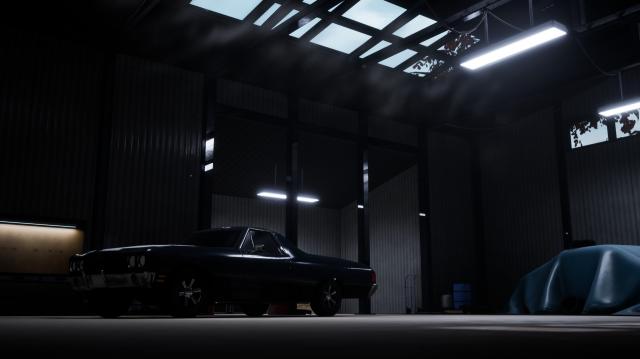 It would be unfair to strictly discount every short-lived concept though.  There are a couple of farm tasks that play harmoniously with the duo's strange dynamic.  The short moments where the lingering shadow of the inevitable end fizzled into the background were surreal and touching.  The phone call sequence is incredibly raw in its judgmental attitude towards The Farmer and is great design in its own right.  The problem is these positives, both big and small, can't discount the end result still not being a cohesive whole.

Dismissing the already-discussed voice acting, presentation deserves some recognition.  As far as technical prowess is concerned, it's an Unreal Engine 4 title that fooled me into thinking it was developed using Unity.  It may be basic, but the pastoral landscape and dour visual tone fit well for this material.  The variety of antique heirlooms smattered around the property, the shape of each barn animal, and sundry audio elements made the place feel relatively authentic; the same couldn't be said for the goofy character models and poor lip-syncing, however.

For the vast, vast, vast majority of those who may be interested in trying out a gameplay-light walking sim as a palette cleanser, be warned about the current retail price.  Despite ignoring the guardrails to drink in the world, I got roughly 1.5 hours' worth of gameplay on my first run.  Connect that with a weirdly specific price of $18 and the exorbitant ask gets really tough to swallow.  Even if you want to disregard my criticisms to try it yourself, hold off for a sale to be safe. 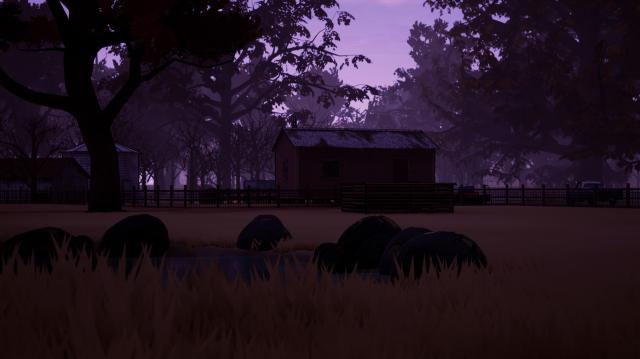 Designing a story - game or otherwise - around inevitability is not easy.  A freshmen studio like Mischief does deserve props in that respect.  It's a special, surprisingly honest premise that could be a good candidate to examine in game schools.  The key issue stems back to this question: what meaningful interaction can be incorporated to avoid this story being better served as a short story or stage play?  Adios can only intermittently provide satisfactory answers.  This humble farmer – for all his faults – deserved a better goodbye.