After countless ports and fairly bad sequels, gamers had started to forget about Compile Heart. Maybe it's the reason why Neptunia Virtual Stars made so little impression when it released in Japan last August. Still, this new action-RPG spin-off from the Neptunia franchise is actually the publisher's best effort in at least three years. 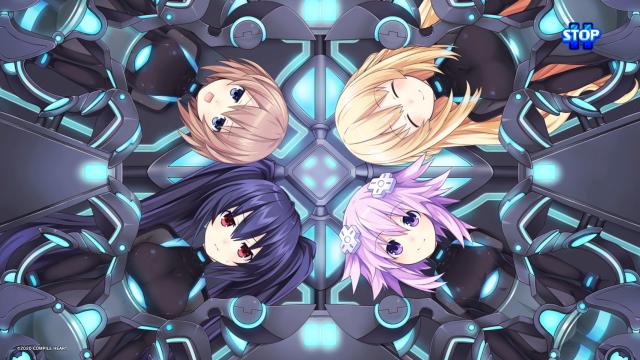 One day, as Neptune's group is off trying VR games at a local game show, the VR machine suddenly sends them to a totally different world. There they meet a goddess called Fair, who explains that she summoned them in order to protect her world, Emote. This universe is being preyed on by invaders called "Anti", which destroy and distort cultural content such as books and social networks. It's a very blunt scenario clumsily inspired by Isekai tropes, but any Neptunia fan knows that the storyline has never been the focal point of the series.

Neptunia Virtual Stars is to be appreciated beyond the storyline and in the dialogue itself. Humor and parody have always been a great source of enjoyment in Neptunia, and this new installment brings back the fun as fans remember it from the series' origins. Up to this entry, Neptunia has been a huge parody of the gaming industry, with each heroine representing a major gaming brand. In Neptunia Virtual Stars the subject has drifted slightly but the spirit remains the same. Instead of spoofing the gaming world, this title is an allegory of media in general. Each level is a satire of one particular type media; there's the world of video streaming, the world of social networks, the world of books, and so on. It's worth mentioning that the visual aspect of these environments has improved compared to a few years ago. Some locations feel a lot livelier than before, partly thanks to lots of funny decorative details that can be spotted here and there. 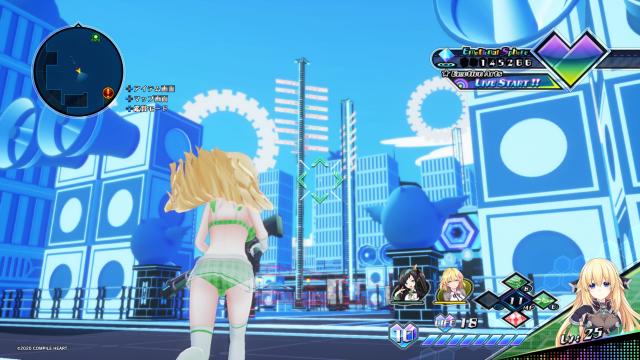 It's prettier to look at, but it's also enjoyable to explore. The Twitter world is by far my favorite - it's absolutely infested with bazooka-wielding blue birds, which I thought was particularly humorous. You can also see posts and application icons in the distance. It's pretty cool, but the dialog is even better. Conversations between characters and the Anti make fun of virtually every recent trend in the geek culture, from Twitter backlash to the latest popular light novels. This dialogue is tremendously amusing, with Compile Heart having revived the kind of jokes and parody that made Neptunia so likable in the first place. 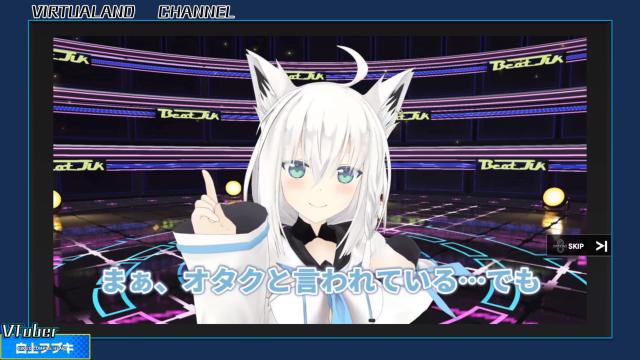 Compile Heart has also gathered together many V-tubers for a couple of entertaining features. V-tubers perform during loading screens but you can also see small clips of them on big screens within the game. They can issue side quests in light-hearted videos or lend a hand during battles. There are also dozens of them you can unlock in certain parts of the game, which is great. 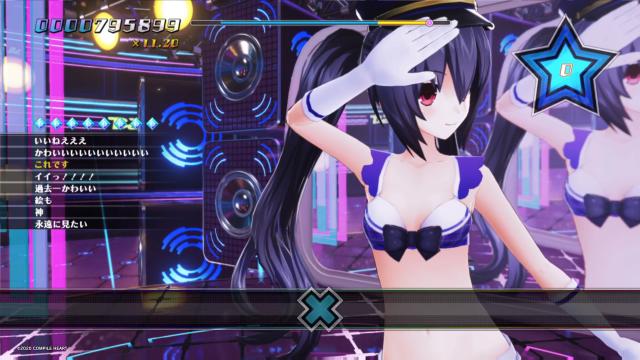 Neptunia Virtual Stars also has an unexpected dancing mini-game, but it's very confusing. I couldn't really understand which button was to be used or the right timing. There are also a couple of poses you can set, but it involves tons of button manipulation, making it a real hassle from the start. It's very cute and you can record your own video clips, but I didn't find it very convincing in terms of gameplay. 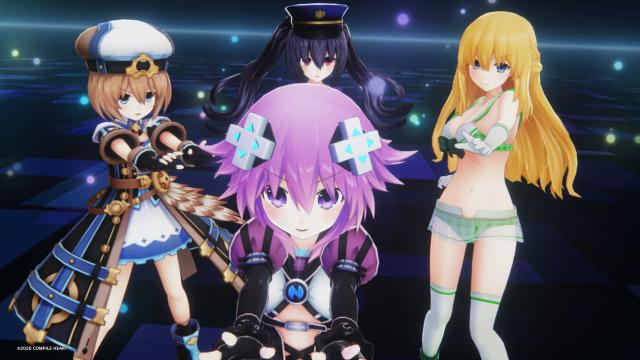 In the larger gameplay department Neptunia Virtual Stars isn't very satisfying either. Compile Heart has decided to reuse an action-RPG formula that's close to the one found in Cyberdimension Neptunia, albeit a little bit better. There are two core types of fighting gameplay: Neptune's group, which fights with firearms, and the newcomers (all the V-tubers), who adopt traditional heroic-fantasy jobs such as archer or warrior (their gear is just a little more fashionable). 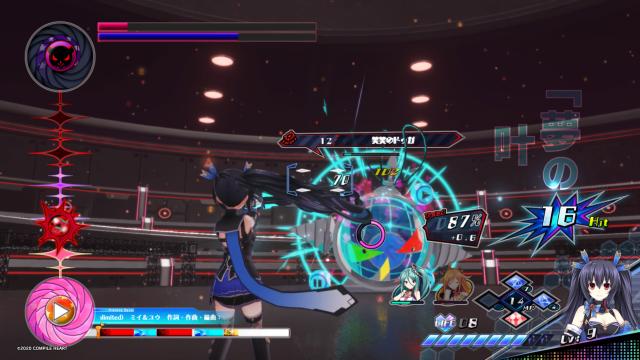 The gun fighting reminded me a lot of Marvelous' Senran Kagura: Peach Beach Splash. Characters can slide very quickly to avoid enemy attacks while shooting, and the aim assist on the L2 button is also very similar. The result is a swift battle system that can be played without being a third person shooter or action game pro, but the flip-side of that is that there's a clear lack of challenge or subtlety. It's also important to stress that the four main characters are very uneven in terms of efficiency: Neptune and Vert lack firepower, so the player eventually needs to use Blanc or Noire in order to make progress.

Battles start to become problematic when you choose to play as the V-tubers. While I'm delighted to have four new playable characters in Neptunia (the first time in many years), I actually didn't play them very much. Their attacks and movements are erratic and imprecise, and aiming is even worse as it's very hard to keep an enemy properly locked-on. The camera is placed way too far out and these characters' attack skills don't convey a lot of energy. All the fighting unfortunately feels very slack. The battle scenes do at least show some clear improvement over other recent Neptunia games in that they're livelier and characters look a lot better. 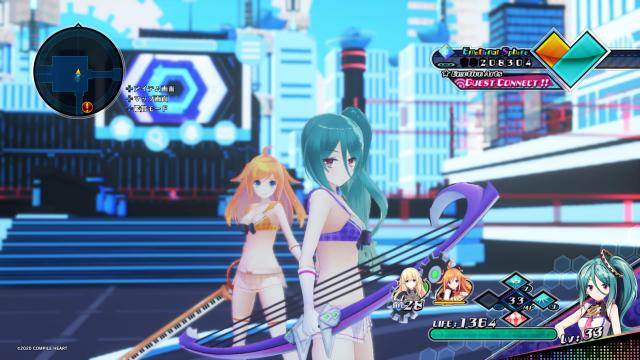 There are also some broader balance issues. For example, even by grinding regularly, the increase in levels is astonishingly slow. By the end of the game, opponents can be twice your level! The share of experience characters get from battles is weirdly distributed too. The equipment is confusing - you don't set armor and accessories like in traditional RPGs, rather you equip V-tuber cubes, but these can have major penalties in terms of HP, some aren't fit for one group or the other, and they're a pain to upgrade. And boss battles end up being especially dull because, while they aren't very strong, they have a lot of HP, so they aren't very challenging or exciting, they're just... long. The end result is that the further you progress through the game, the more it begins to feel like a chore.

Despite blatant gameplay drawbacks, Neptunia Virtual Stars is a decent new entry because it's very faithful to the series' roots. It renews the parody and humor with praise-worthy creativity, the narrative remains pleasant, the nod to the V-tuber craze is great, and the improved graphics are welcome. And yet somehow it lacks content (there are precious few in-game illustrations and next to no side content) and has notable balancing issues, which can be very disappointing. Compile Heart still seems on the right track, but the Neptunia franchise needs to meet higher standards or it will be quickly left behind by the AA competition.