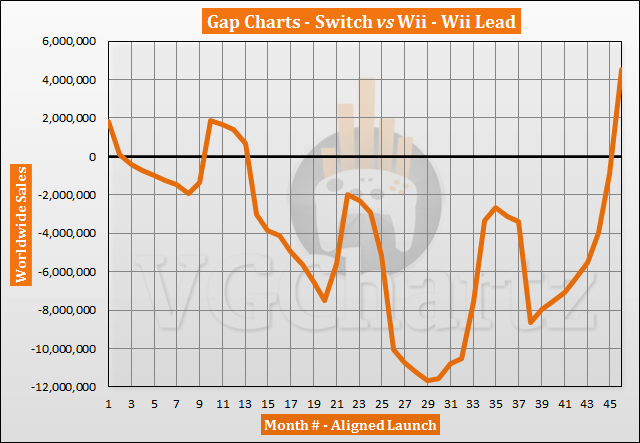 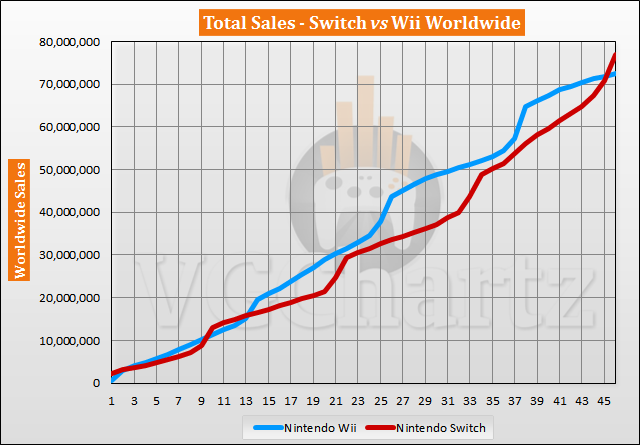 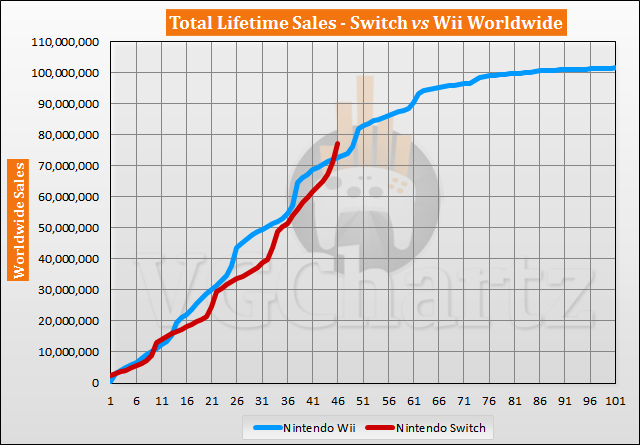 The 46th month for the Nintendo Switch is December 2020 and for the Wii it is August 2010. The Switch has sold 76.99 million units, while the Wii sold 72.48 million units during the same timeframe. The Wii sold current Switch sales in month 50.

The Wii sold 101.63 million units worldwide during its lifetime. The Switch needs to sell another 24.64 million units to outsell the Wii.

And there you have it. If Switch's 2021 is anything like 2020 then the Switch aint ever looking back. If 2020 was Switch's peak then the Wii might kiss the Switch one more time before Switch makes significant gains and never looks back.

Either way, Switch is coming out on top and just might outsell the Wii by the end of 2021.

Yeah. I think the odds are in the switch's favor that the Wii might not catch up again. The switch would have to sell around 5 million I think from January to the end of April to keep the lead. So that's pretty reasonable.

So even if the Wii comes back, it will be very brief. Probably just for a month.

Thinking how the Switch might surpass 100 millions and the Wii this year is crazy. It feels like there is still a lot of life left to it.

Now the big question is: can the Switch stay in front or does the Wii get a last month or two after it's holiday season?

But even if the Wii gets in front again, it would only last a month or two before the Switch passes the Wii again and would never look back.

If the Switch manages to sell 82-83 million by June, it should stay ahead, but that's not an easy task

Yeah, but actually that would only be 1 million to 1.2 million per month until then. It's certainly not trivial, but it's also not unreasonable.

The behemoth has fallen!

Well, not completely yet, but this is a major change. And looking by how much the Switch blew past the Wii, there is a considerable chance Switch stays ahead even when Wii gets through it's holiday season. If not the Switch probably will back in lead shortly after, the momentum is clearly on Switch's side.

And to think it will most likely pass Wii this year.

Switch will out sell the Wii by end of this year

Depending on how strong the Switch's next 4 months are, the Wii will either take the lead one more time, or the Switch just passed it once and for all and is never looking back.

"The Wii is currently ahead of the Switch by 4.51 million units." Need to correct this phrase

Finally takes the lead! Switch should pass Wii's lifetime numbers maybe like January of next year (we'll have to see how this year goes), with still probably at least 2+ years left of life after that!

Wii's gonna back in the lead again for a few months, because Switch isn't making it past 83 million at the end of this January. But it won't last long.