Virtual reality has become The Wild West of the video game landscape (with one notable exception) - almost everyone has trepidations about exploring it. The price point of entry alone is enough to give most pause for thought, while the experimental nature of the games themselves is equally daunting to developers and gamers alike. However, those able to accept the growing pains of the medium have been receiving some underappreciated work from companies brave enough to blaze these new trails. 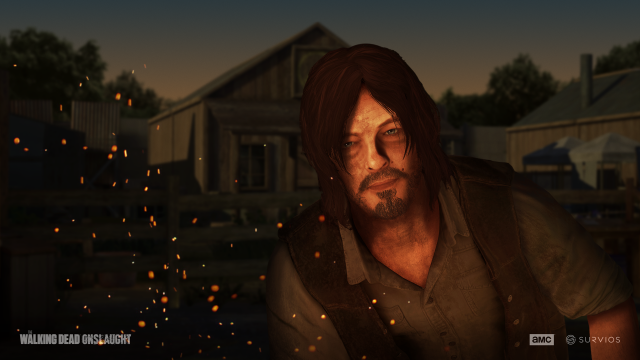 Survios is one of these pioneers, and though The Walking Dead: Onslaught is undeniably fun, it offers a brief glimpse of the long road ahead that still needs to be traversed, before reaching the destination that has yet to be discovered.

The in media res story opens with franchise protagonist Rick Grimes searching for the whereabouts of fan-favorite Daryl Dixon, who has gone missing in the days following a botched supply run. As the two reunite during a brief skirmish, a wounded Daryl explains that he, too, has been searching for a missing person; a task charged to him by an unknown stranger. Rick is skeptical of the situation, but knows his only choice is to hear Daryl out.

Onslaught treads lightly over the series' mythos, remaining open to those unfamiliar with The Walking Dead. Licensed games generally have limitations on the directions their stories can go, and Survios is aware of this. It won't win any awards, but the framework and overall presentation are done well. The strangest part is that the Campaign feels like a tutorial, but is locked behind the rest of the game. Each Campaign Mission requires a certain amount of Survivors to be brought to Alexandria before it can be accessed. Since survivors are gained by finding food during missions, the only option is to go out on side quests to gain the resources required to continue the story. Fortunately, this is where most of the enjoyment is to be found. 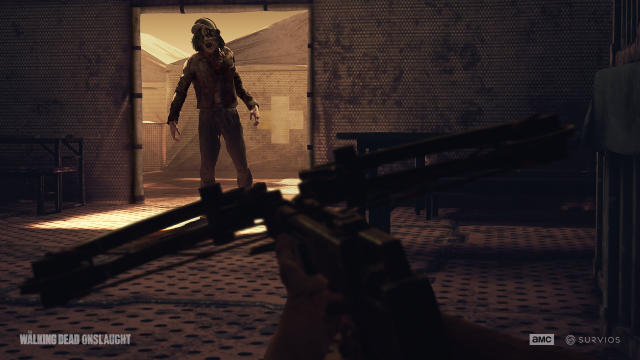 Gaining survivors grants access to several facilities that confer passive bonuses when out on missions. The Clinic makes health packs more effective, and the Forge gives additional ammunition whenever any is picked up. Upgrading these facilities requires workers, as well as the same materials used for upgrading equipment. Proper allocation of these resources in the correct places makes up a fair portion of the gameplay. Experiencing how the various systems intersect with each other is enjoyable and encouraging, inspiring players to continue developing them further.

The heart of Onslaught lies in its Scavenger Missions. Each have their own flavor, but all have the same objective of gathering as many resources as possible in the time allotted. During Supply Runs, players attempt to outrun the Herd (a mass of Walkers, represented by a constantly moving red line), as they loot derelict houses for resources, weapons, and food, killing the undead with whatever can be swung or flung with the PlayStation Move controllers. Evacuation Sites are endurance tests that take place in a single location. Over time, perpetually spawning Walkers overwhelm the area. Players must gather what they can and hold out until the cavalry arrives, before carving a pathway to escape. Supply Raids combine the previous two modes together into one prolonged scenario. 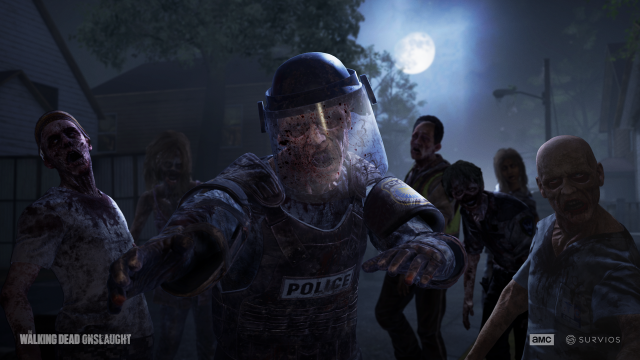 The arcade style of Scavenger Missions is reminiscent of Sega classics such as House of the Dead and Crazy Taxi. Survios should have structured the gameplay to embrace these qualities more than it did. Instead, some of the inherent design actively works against this flow, to Onslaught's detriment.

This is most prominent when Stabilizing weapons with both hands. Some of the most powerful abilities can only be accessed this way, but players will constantly be needing a free hand to pick up the hundreds of items throughout each level. The effect of 'snapping' to and from weapons feels unnatural, frequently wounding the rhythm of the gameplay. In terms of logic and balance, it makes sense why Survios made the decisions it did. The benefits of stabilizing the Battle Axe or Katana are certainly worth the hassle, but the last thing a game should do is hold itself back from being a more enjoyable experience. Embracing the arcade spirit here would have benefited Onslaught immensely, a concession the developers made with certain weapon upgrades.

It also manifests in the natural speed of the characters. Offering three types of movement and turning options is worthy of praise, but the game is a step or two slower and more deliberate than it should have been. If Sprint Vector was anything to go by, Survios is no stranger to speed, so the reason for Onslaught's pace is deliberate. It's almost as if the company accidentally stumbled onto the game it should have made and lifted elements from it, instead of committing to that vision entirely. 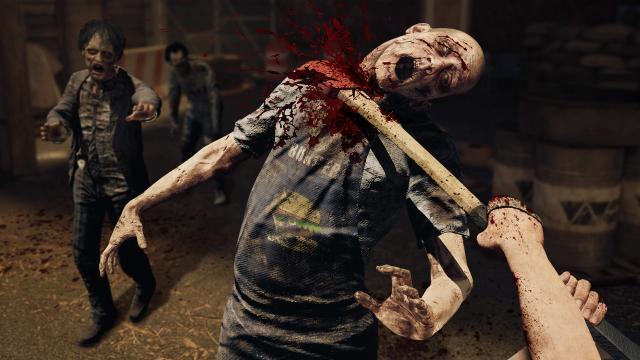 Weapons discovered in any mode will be added to The Armory. There are 24 to discover, with all of them having four upgrades that unlock additional traits. These include standards like Clip Capacity or Laser Sights, but others go into unique territory. The Bloodlust perk grants a damage buff after killing three Walkers with the machete, and can be maintained as long as bodies continue to drop. The Sever mod turns the battle axe into an unimaginably powerful weapon when wielded with both hands, gaining the ability to hew the limbs from anything that moves. If there's a weapon more fun to use than Daryl's crossbow with the Auto-Reload mod in VR, I have yet to pretend to hold it in my hands.

One issue is that the same perks show up on multiple weapons far too often. Leeching health or slowing enemies are useful qualities to be sure, but could have been more limited in their appearances to keep their prestige. Conversely, abilities that allow certain weapons to automatically scavenge resources from enemies have such a small chance of activating (and so little payout), that they'll most likely be left in the Armory soon after acquiring them. The system isn't perfect by any means, but the level of customization is impressive for a VR game. By the end, everyone will have their preferred loadout, and any weapon players choose will be effective. Though it's a shame a weapon as iconic to the series as the katana doesn't stand out more. 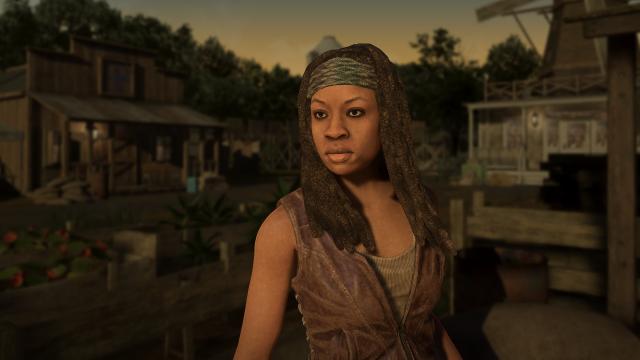 The sound design is the most consistent aspect of Onslaught. Norman Reedus, Melissa McBride, and Josh McDermitt reprise their roles as Daryl Dixon, Carol Peletier, and Eugene Porter from the television series, and perform as expected. Being the main character and overall framing of the Campaign, Reedus gets the lion's share of the dialogue, while the others are relegated to flavor commentary during side quests. Budgetary constraints are a likely culprit for this, but with the frequency that players will be going on Scavenger Missions, hearing the same six or seven lines of speech gets old fast. Industry veterans G.K. Bowes and Keith Ferguson pinch hit as Michonne Hawthorne and Rick Grimes, with both turning in solid performances. Cathy Cavadini (of Powerpuff Girls fame) is used sparingly as the unseen 'Driver', but is effective as ever.

The soundtrack is minimal, but hits the right notes when it needs to. The main theme of Alexandria is faintly evocative of The Rogue Encampment from Diablo II, and the ambiance of Supply Runs is as foreboding as the tense music that plays during Evacuations. The worst thing that could be said about it is that there simply isn't enough. Less can be more, but most of the time, it's less. 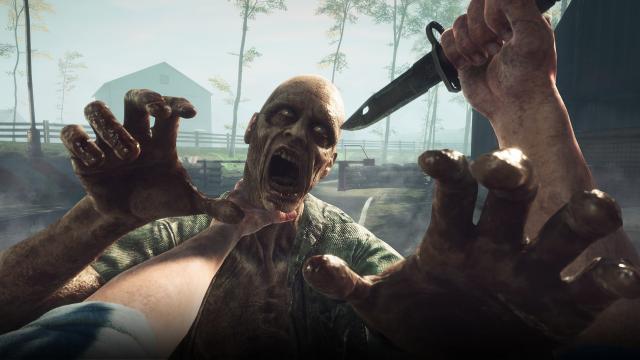 Like most developers in the virtual trenches, Survios deserves more credit for its efforts than it receives, and Onslaught will probably go down as another example of this. Anyone unwilling to accept the current limitations of the hardware or the experimental phase of the medium won't be won over here, but perhaps they weren't meant to. Those already on the virtual wagon ride have access to yet another game that, while flawed, is very fun. The arcade nature of the gameplay is addictive, and the loop of gathering resources and survivors to upgrade facilities and equipment is satisfying. The way the game synergizes with itself is simply good design.

If Survios can properly reflect on what works with Onslaught as much as what doesn't, it will continue to gain invaluable experience in a field that few are even willing to explore. This might not seem like much at the end of the eighth generation, but it'll only be a matter of time before the original prospectors strike gold. And when they finally do, expect to see plenty of pickets in the ground.

But for now, grab a zombie and a hammer; they go great together, and you'll feel better for introducing them.

This review is based on a digital copy of The Walking Dead: Onslaught for the PS4, provided by the publisher.

Welp I gotta buy a PSVR then. Awesome review 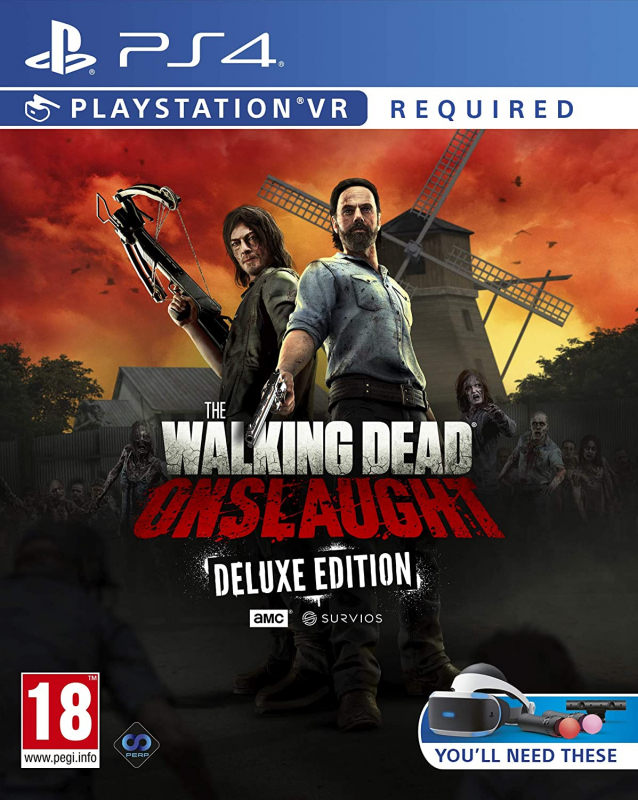