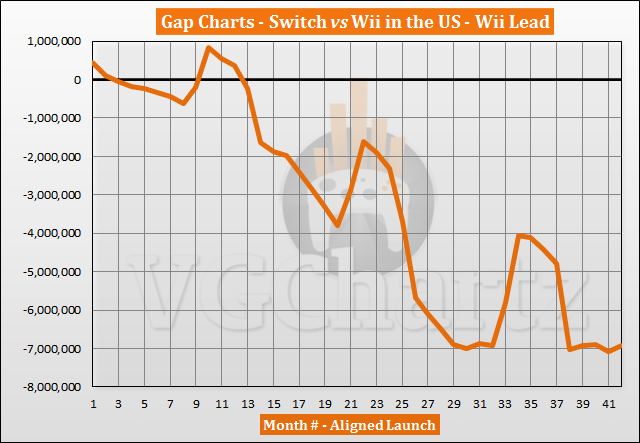 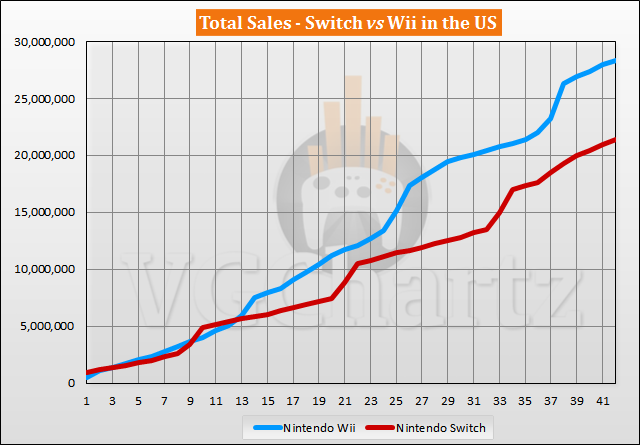 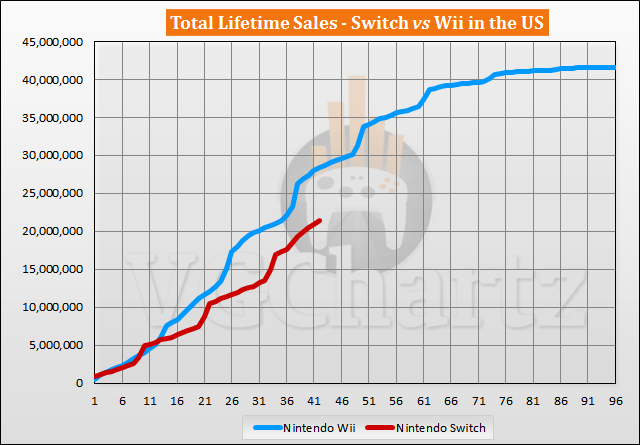 August 2020 is the 42nd month that the Nintendo Switch has been available for in the US. During the latest month, the Switch caught up to the Wii when you align the launches by 151,408 units. In the last 12 months, the Switch has outsold the Wii by 93,557 units. The Wii is currently ahead of the Switch by 6.92 million units.

The 42nd month for the Nintendo Switch is August 2020 and for the Wii it is April 2010. The Switch has sold 21.43 million units, while the Wii sold 28.35 million units during the same timeframe.

The Wii sold 41.70 million units in the US during its lifetime. The Switch needs to sell another 20.27 million units to outsell the Wii.

The Wii was the beast incarnate!

The switch can do it

I expect a gap of 2M in favor of Wii after Switch's holidays this year. Gap curve is going to leave the downward channel.

Wii trend died out after 5 years, it's sales flatlined . Switch will easily pass it, it's a console made for hardcore gamers.

Yes! Switch will do it! Beware the pro model 😎

Even with the monster momentum the Switch currently has, it barely matches the one of the Wii. It will be interesting to see if Switch can sustain said momentum longer, which would help it to get closer to Wii or even beat it.

2018 lost the Switch towards the Wii, the Wii just had the better momentum. Now it holds the same. But will Switch peak in 2020 or 2021 (hopefully). If it will be 2021, we might see the momentum help the Switch decrease the gap substantially.

Wii is at the end of it's legs while the Switch is just getting started. After this year, the Wii only sold another 7M in the US total, and Switch will sell much more than that following this year. So from here on out, Switch should slowly recoup the gap it got from the Wii over the last years and then overtake the Wii in the end.

@Bofferbrauer: you mean Wii sold only 7M more, after the holidays which aren't yet in the launch-aligned sales? Because in the graph above I see Wii selling another 13M-14M after this point we are currently at. To close that Switch has to sell another 21M, or as much as it sold so far. That is possible, but far from easy considering it is selling currently enormously so people may ask if this year is the peak year for Switch.

@Mnementh: 7M after the year of 2010, which is what the Switch is fighting against this year. But if you take this month as baseline, then it's still 14M, true.

But you seem to have missed my point: That 2010 was the last good year for the Wii, and even then it was slowing down throughout summer and fall (though still had a big holiday push).

Wii will start to slow down while the Switch is accelerating now towards the holiday season, and while the Wii will retake the lead after it's holiday season, it will never be as big anymore as it is right now and then melt away until the time comes that the Switch will overtake the Wii.