Indie developers and Metroidvania games go together like peanut butter and chocolate. Want proof? Look no further than the last few years, which has produced gems like Ori and the Will of the Wisps, Monster Boy and the Cursed Kingdom, and The Messenger, among many others. The latest contribution to the sub-genre comes from the small four-man studio Elden Pixels, whose Alwa's Legacy is a solid side-scrolling action-adventure game. While not on the same level as the aforementioned titles, it remains a worthy pickup thanks to clever puzzles, rewarding exploration, nice chiptune music, and some striking backgrounds.

Alwa's Legacy begins with our heroine Zoe waking up at the edge of town, lost and missing her memories. As she moves toward civilization, she runs into a few nasty skeletons and an evil sorcerer named Vicar who attempts to halt her progress. Eventually, Zoe finds her way to the town of Westwood where she's received by the grandmotherly Saga, who grants Zoe a magical book and sends her off toward adventure. 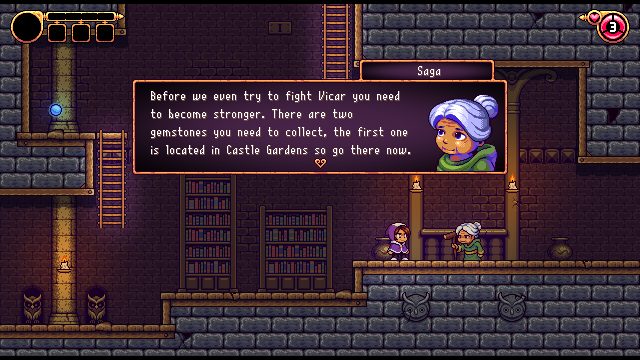 The story in Alwa's Legacy is arguably it weakest component. The premise — whereby an amnesiac adventurer rids the land of monsters — is already hopelessly clichéd, but Elden Pixels makes things worse by doing absolutely nothing with it. You'll play through the game for six to eight hours waiting for a payoff that never comes.

So, if you're hoping for a moving, intriguing story with memorable characters and moments, look elsewhere. If you're far more interested in engaging action-adventure gameplay, you'll most likely discover a lot to like about Alwa's Legacy.

This is a Metroidvania game at its core, so expect to fight, jump, explore and problem-solve yourself across Alwa's different regions, all in 2D. Zoe isn't as acrobatic as Juan from Guacamelee! or as nimble as Ori from Will of the Wisps, but she still moves smoothly thanks to tight, responsive controls. In general this game feels (and looks) more like a lost SNES title. As a result, don't expect a lot of fancy fighting or complicated platforming. Zoe has only two real offensive weapons — a staff and a simple projectile attack — and enemies fall in two to three hits. 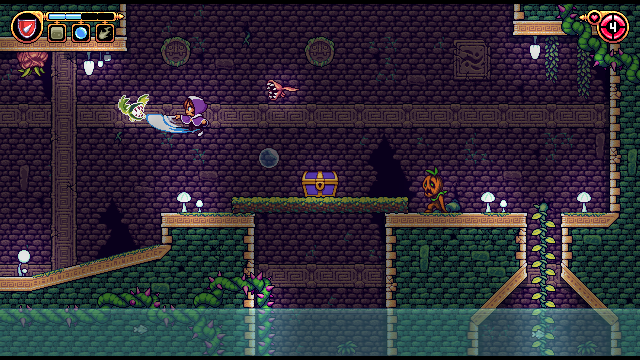 That's not to say Zoe doesn't have a deep toolbox; far from it, in fact. She has access to three spells — which materialize blocks, bubbles, and projectiles — and four skills, which allow her to walk on spikes, slow down time, etc. It's just that these powers are far more useful and interesting in the context of exploration and problem-solving. Indeed, Elden Pixels decided to invest most of its resources in world and dungeon design, and it shows. Alwa plays host to several compelling interconnected areas — each defined by unique enemies, backgrounds, musical tracks, and riddles — and five dungeons with loads of secrets and puzzles.

In true Metroidvania fashion, you'll need to obtain or upgrade an item to access several of the walled-off, mysterious areas of Alwa's map. There's a satisfying rhythm to Alwa's Legacy, as you march back and forth between locales looking for the right tool for the job. Where some games in the sub-genre get bogged down in back-tracking, this title almost never feels stale. You can warp between fast-travel points, which saves time, but more importantly there is almost always something to discover during your adventure. That includes 99 orbs, used to upgrade your three main spells; 12 petals, used to expand your health; 42 tears, used to create manual fast-travel spots; multiple quest-giving NPCs; and several opaque mysteries that require some outside-the-box thinking. 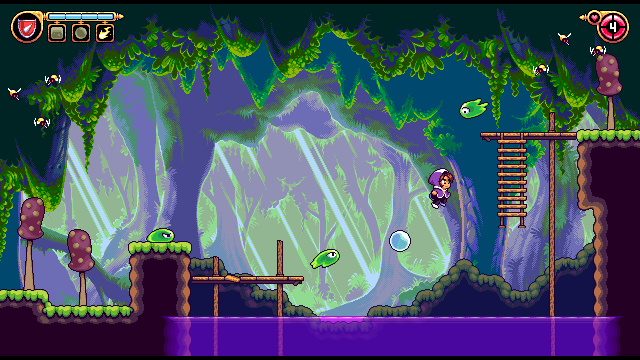 When you finally figure out how to get past Alwa's many roadblocks, you're often rewarded with a dungeon. Alwa's Legacy has five in total, which increase in difficulty as you go; the fifth and final dungeon is especially tricky. The dungeons, like the game is general, are derivative but engaging. They each leverage some central conceit in fun and creative ways. The second dungeon, Sylvan Temple, involves Zoe raising and lowering water levels, while subsequent dungeons allow her to invert gravity and phase through walls. One note on Sylvan Temple, for completionists: there's a point of no return related to an NPC, so take your time exploring. You've been warned.

Each dungeon culminates, unsurprisingly, in a boss battle. While most of these fights are satisfactory, the game's final boss encounter is disappointing. In fact, the last boss is kind of a pushover. Where a lot of side-scrolling action games go out of their way to make a final boss exponentially tougher than those that came before, Alwa's Legacy goes too far in the other direction. 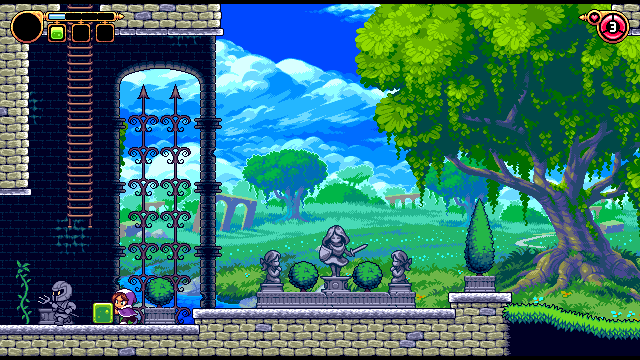 While the climactic boss battle is underwhelming, it certainly looks and sounds good. In fact, everything in Alwa's Legacy looks and sounds good, thanks to the game's striking backgrounds and catchy chiptune music — the latter courtesy of Tadd "RushJet1" Nuznov. "Kloki's Bridge" and "Town of Westwood" are two of the best tracks.

Is Alwa's Legacy among the best back-tracking action-adventure titles in recent memory? No. Is it a solid addition to the sub-genre? Yes. While the story goes nowhere and the final boss battle is a letdown, rewarding exploration, creative puzzles, handsome art, and appealing music make it a worthy purchase — particularly for enthusiasts who can't get enough of the indie Metroidvania scene.

This review is based on a digital copy of Alwa's Legacy for the NS, provided by the publisher.