If you’re going to emulate the best, you’d better get two things right: innovate and elevate from your source material, lest you come off as a contrived imitation. Mortal Shell succeeds in both departments. It sticks so closely to the Souls series that at first glance you’d be forgiven for thinking it was an outright copy, right down to the item descriptions on the loading screen. Though with reverence for the genre and astute attention to what matters most, Mortal Shell retains most fan-favorite core mechanics, while streamlining and completely transforming others. 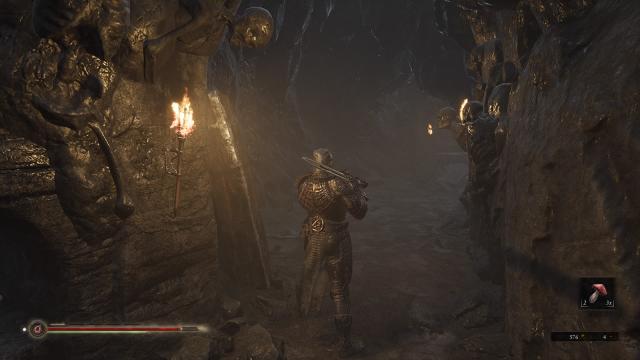 This is the first game released by developer Cold Symmetry and was made by a core team of only 15 people. That’s truly an astonishing feat, and one that blew my mind through the entirety of the game. Combat is appropriately weighty and visuals are gorgeous and moody. Framerate and technical issues are almost non-existent, which is an achievement even most larger studios can’t seem to get right these days. The size and scope of Mortal Shell is smaller than a typical Souls game, however. I completed my first playthrough in about 17 hours, but if you want more, New Game Plus is available. Everything here measures up in terms of quality, just don’t expect a 50 hour excursion.

In true Souls fashion, the story of Mortal Shell is dark and cryptic, with most of its narrative being driven by NPCs, ambiguous lore stones, or scrawlings on a wall, and character progression that delivers stirring voiced tales to accompany newly acquired abilities. Essentially, though, you awaken in a pool of water as just a husk of a being. You’ll acquire an unknown “Shell” to inhabit and make your way to the hub world area, Fallgrim. Here you’ll meet the Dark Father, a giant bird encased in metal and locked in a tower, who tasks you with bringing back three glands to free him. 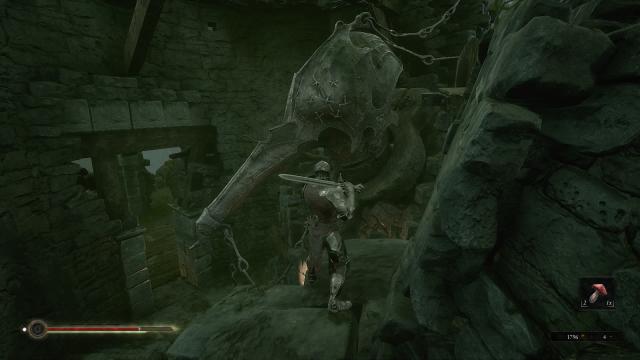 Also in this hub area is your local merchant Vlas. And his cat. Which you can pet… and there’s a trophy for doing so. This large, heavy-set, open-robed, gnarly looking fellow will sell you miscellaneous items needed on your outings. It's here in Fallgrim that you’ll first meet Sester Genessa, who acts as both your checkpoint (or bonfire, if you will) and an experience dump for character progression. Just speaking to her will trigger a checkpoint save, but enemies aren't respawned unless you enter into the upgrade menu. You’ll encounter her throughout the game, and it’s important to know you can still use her as a checkpoint for progress without actually respawning anyone.

By now everyone knows the usual tropes included in a Souls-like game. Experience is dropped upon death and permanently lost if not retrieved before succumbing to defeat once more. It should be difficult. You should die a lot. Paths should be branching and secrets abounding. You should feel righteous indignation when dying in boss fights. These are some of the usual suspects found in the Souls genre and Mortal Shell has them all, and does them just as well. Where the formula gets shaken up is in the leveling system. Somewhat. 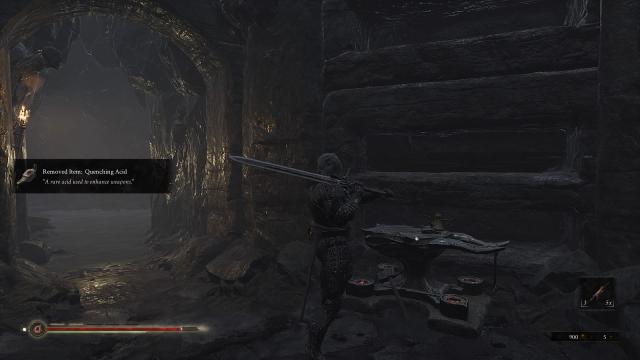 Rather than pumping all your experience into stats one by one, Mortal Shell instead opts to give the player “Shells” to inhabit. These shells effectively work like character builds. ‘Harros, The Vassal’ for example, is your well-rounded Knight class, affording decent health and stamina alike. ‘Tiel, The Acolyte’ is more akin to a Thief or Rogue build, with high stamina but low health. ‘Eredim, The Venerable’, conversely, has a massive health bar while touting the smallest stamina bar of all the shells.

These shells allow for less time agonizing in the stats menu and more time exploring the world and making progress. While I myself am usually a min/max stat whore, I not only didn’t miss the mechanic, but actually appreciated the character build direction. With four shells each uniquely tailored to a specific playstyle, it’s not only easy to progress a favorite build, but the freedom to mix it up is always there, as you can swap between shells at any time - with an effigy of course. 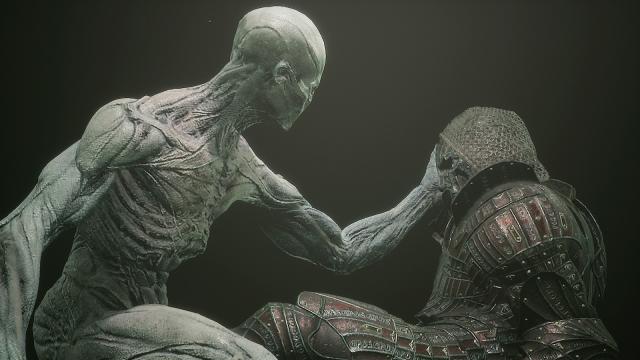 One of the new mechanics that differs from traditional Souls games is the ability to “Harden” your shell, allowing you to absorb a blow and take no damage. This ability is on a short cooldown timer and basically replaces the need for a shield. In addition to that, after suffering a fatal blow, instead of dying you're knocked from your shell and have a brief window to reclaim it. Doing so will refill your health to full and act as a second chance. Die again and you’re dead for good, leaving your shell behind and your experience with it.

Combat feels just like you’d expect it to: perfectly weighted and precise. R1/R2 is your light and heavy attack. Dodging is performed with circle, and when pressed again will execute a roll. L1 is your parry and holding L2 will harden your shell. Studying your opponents' moves and attack-sets is still very much the order of the day, and learning to time your strikes and combo-ing light/heavy attacks will serve you well. Items are familiarly cycled with the left and right D-pad and pressing up will use the chosen item. You won’t be able to rely on Estus Flasks though, as healing in Mortal Shell is done by way of parries and items (Namely Weltcaps (healing mushrooms) found through the environment which repopulate on five minute cooldown timers). Other healing items like Boiled Rat are dropped by enemies or can be purchased from Vlas the merchant. 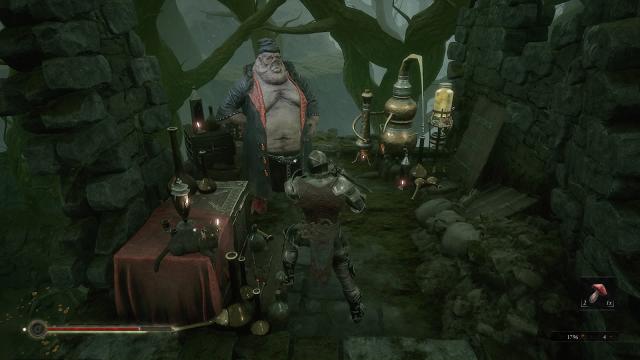 As you chain attacks and kill enemies, you start to build up Resolve, a resource needed to execute powerful attacks or gain health from a successful parry. The parry timing window took me quite a while to get used to, but that made it feel like a more exciting mechanic. Instead of a sure thing, it’s a bit of a gamble, and I found it ratcheted up the tension when deciding whether to attempt it or not. The resolve meter fills in segments and once a section is full it’ll remain so until you use it. If you don’t completely fill a bar, however, it does fade fairly quickly, and it seems Cold Symmetry wanted it to act as an incentive to quicken the pace for players. Now, there are shells that are more attuned to gaining and using resolve, so if that’s a utility you prefer you can choose a shell to match.

I will say that bosses aren’t as over-the-top as in most Souls games. Neither in spectacle nor difficulty. I’m sure this will fly in the face of many devote Souls fans, who revel in the punishing boss fights, but for me the boss battles were always the gruelling part to “get through” in the Souls series. Most of the enjoyment I garner from a Souls-like game is in the exploration and discovery, combined with the steady progress and character evolution. In Mortal Shell, bosses are still difficult, interesting, and creative though. I really loved the ‘Crucix, The Twiceborn’ boss fight in particular. He’s a large, red, spear-wielding Spartan-looking warrior, with a half-grown twin protruding from his chest. He attacks with his long reaching spear then rolls far away only to guard with his shield, while the chest-growth-twin shoots blowgun darts at you. There are a few other interesting mechanics involved in this boss battle too, but I won’t spoil them for you here. 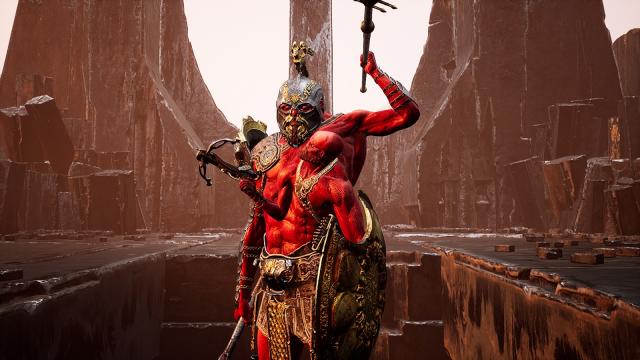 In another departure from classic Souls, you won’t be collecting mass amounts of armor and weapons. In fact, armor and weight aren’t factors at all in Mortal Shell. This is most likely due to the shells being crafted towards specific builds and the fact that the game world is a little smaller overall, so there’s less room/time to acquire a plethora of gear. There are a few different weapons, however, and these are gained by finding book alters that trigger a one-on-one fight with your opponent who’s wielding the new weapon. Defeat him and the weapon is yours. While it may be disappointing to some to find fewer weapons, Cold Symmetry does an excellent job offering the main staples people are looking for while removing inventory clutter and distilling the experience, but still providing options.

So what do you do with all that experience (Tar, as it’s called in this game) you acquire while cutting down your enemies, careful step by careful step? In conjunction with Glimpses, another form of currency, it goes towards gaining new abilities and attributes that further develop your shell. I spent the better part of the game using ‘Harros, The Vassal’ as my main shell. His abilities center around being able to Harden more often and gain glimpses more readily. So, as I was getting my bearings with the game, I was able to play more defensively and farm plenty of glimpses to upgrade with. 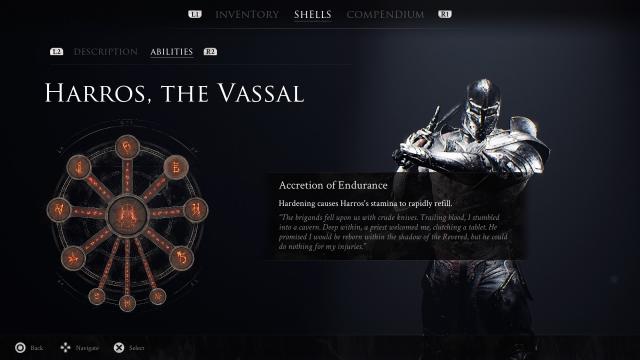 After mastering Harros’ shell, I moved on to ‘Eredim, The Venerable,’ the one with high health and low stamina. One of his best abilities allows him to gain execution stacks upon killing an enemy. Each stack increases the base damage of his attacks, so with a good run you can be considerably stronger when facing a boss. Couple that with another of his sweet upgrades - Accretion of Inheritance - which makes him deal extra damage to enemies who are alone, and the boss battle I used him in made the fight a breeze. Mind you, I had raised my stack count to over 150 by that point. I was curious to see how high I could get the stack to go, but then lost it all when racing back through an empty level and accidentally falling off an unseen ledge, plummeting to my death.

Mortal Shell may not be as difficult or as long as similar games in the genre, but the level of polish and balance is impressive. Mortal Shell retains the best elements of the genre - weighty combat, tension, exploration, and progression - and succeeds in refining a deep and beloved genre in ways that feel rewarding, familiar, and new, all at the same time. At just $30 this is an incredible game which scratches that specific itch, and is an easy recommendation for any Souls fan out there.

This review is based on a digital copy of Mortal Shell for the PS4, provided by the publisher.

imma pick this up support these awesome devs! dont wait for sale 30 bucks is worth it!

It really is a killer game at a fair price. You won't be disappointed.

fck yes lez go haha! still busy with got though!

Didn't realize this was only $30. Might have to pick it up.

Yeah i just wish that HellPoint was on the Technical level of Mortal Shell.