Developer Neat Corporation announced the action adventure stealth game, Budget Cuts, will launch for the PlayStation VR on July 10 and include a new Panopticon level. The game first launched for PC in June 2018 for Steam and Oculus via virtual reality. 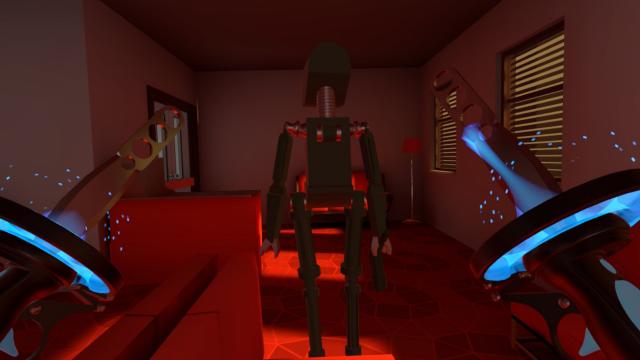 Here is an overview of the new Panopticon level:

With “Panopticon,” we wanted to put the player’s journey and the importance of choice at the core of the level’s design. We do this by providing them with a clear and central goal that is easy to identify, but hard to access (that green room in the middle of the level). We wanted to encourage the player to pave their own path forward, either through brute force and action or through stealth and sneaking their way around in order to reach the center of the level. Honing in on the idea that the player is the one who chooses between fast-paced stabbing or tactical sneaking through their traversal of the level was key to the theme of this level.

In order to make sure that “Panopticon” had a goal that was easy to see (but was also often just out of reach) we decided on a radial layout of the level. This design approach lent itself very nicely to the circular shape you see on the level. This has the added effect of both challenging the player’s navigational skills—you might just find yourself going “in circles” if you don’t pay attention. This layout also helps make the center of the level visible from several points, which supports the player in making informed decisions on how to traverse towards their goal.

We also wanted to play with space and form in this level, focusing more on round shapes and verticality inside office spaces, while relying very heavily on our iconic color blocking art style to make each “slice” of the level feel bold and memorable. Using colors to help distinguish areas of gameplay also has the added benefit of making the level more navigable for the player, thus reinforcing the players’ personal choices.

Put on your PlayStation VR headset to unleash your inner office spy ninja skills and save both your job and your life in this unique PS4 stealth game. As an employee at mega conglomerate TransCorp, your role as a paper shuffling filer has been put under threat by the arrival of cost-cutting robots. And as your latest co-worker has been dragged off to the terrifying HR department, your only chance to survive is to take matters into your own hands.

Dexterously zip or silently sneak your way through the office, and defend yourself using super sharp letter openers to disable your deadly robotic hunters in close quarter combat.

I saw "budget cuts" and "PlayStation" and about freaked out.