Infinity Ward has released a new update Call of Duty: Modern Warfare that adds a message to the splash screen in support of the Black Lives Matter movement. The message appears when you launch game, on loading screens and when you switch between separate game modes.

The splash screen message features "Black Lives Matter" in large font with the following message below it:

"Our community is hurting. The systemic inequalities our community experiences are once again center stage. Call of Duty and Infinity Ward stand for equality and inclusion. We stand against the racism and injustice our Black community endures. Until change happens and Black Lives Matter, we will never truly be the community we strive to be." 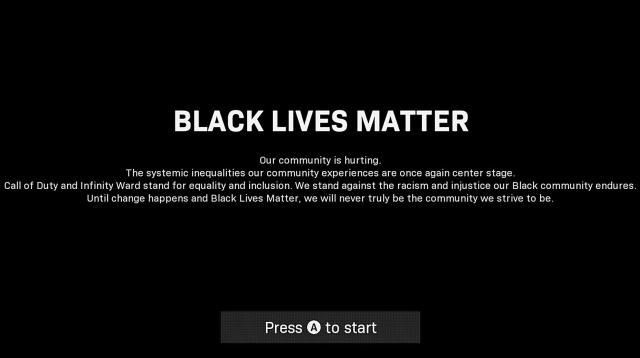 Several video games in recent days have released statements in support of Black Lives Matter and black communities following protests across the US against police brutality in the US and the death of George Floyd.

Call of Duty: Modern Warfare launched in October 2019 for the PlayStation 4, Xbox One and Windows PC.

This is awesome, thank you Call of Duty

OK, I'm all in favour of Black Lives Matter, but I'm sure this would annoy even me. It's not that the game is telling me this, it's that it sound like it tells it a ridiculous amount of times (unless loading screens are very rare in the game).