Several years ago, a short gaming gif posted on Twitter and Reddit exploded. It showcased an interesting game concept of a simple stick man walking across signs that were scattered around a gorgeous city. It seemed novel at the time, and now that it's finally released I can firmly say that it's just as novel and charming now as it was all those years ago when it first exploded in popularity. 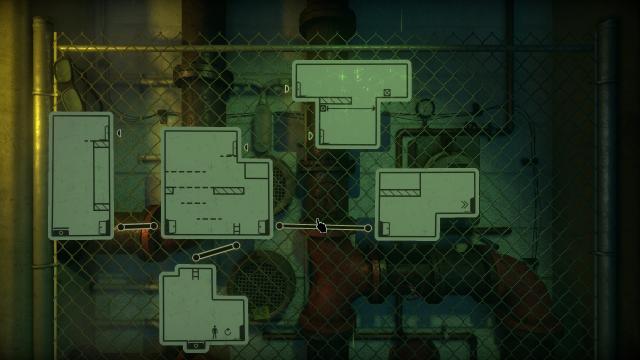 The Pedestrian is a 2D puzzle-platformer set in a fully realised 3D world. You take on the role of either a male or female toilet sign character and then proceed navigate through the world, travelling via 2D signs that you're able to manipulate in the foreground. It's simple to control your little character; the main difficulty comes from the signs and altering them so that you can advance past various puzzles and obstacles.

Each area contains multiple signs that can be connected to one another through doors, ladders, and (later on) windows. Your task is to figure out a route through these areas, avoiding obstacles and roadblocks to your exit. You then proceed to make your way through the real world some more before coming to the next set of signpost puzzles. You're not able to re-arrange the signs without them resetting, so you have to properly track and take in the whole puzzle before deciding to run through it with your character.

This concept carries on through the game's 3-5 hour playtime, but the puzzles introduce new elements which keep things from getting stale. From an injection fluid that can be placed on a sign to make it 'remember' its current state rather than reset when you break your path, to the real world getting in the way of moving puzzle signs, you constantly have to figure out new ways to get around the puzzles before you. The overall playtime may be short, but that does at least ensure that The Pedestrian doesn't outstay its welcome. It's also fulfilling enough to feel like you've got your worth out of the game. 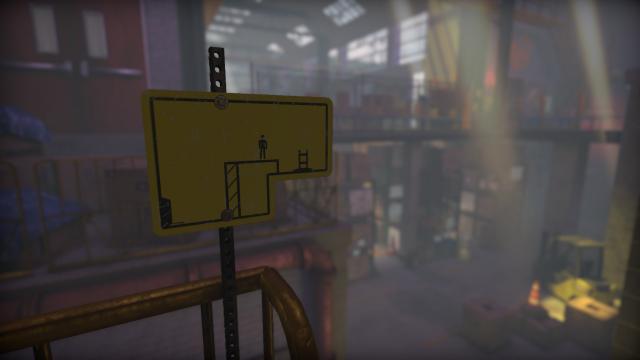 There's no narrative, so to speak, instead the environmental backdrop tells its own sort of story. You travel through these backdrops in a linear fashion, collecting items throughout the game's six stages/zones, with each zone consisting of a multi-part puzzle that requires you to gather multiple items, such as a key to unlock a door, or a box to jump higher. Once the zone is completed you acquire a key component to fit into a rather worse for wear virtual GameBoy.

Graphically, and artistically, The Pedestrian is beautiful to observe. While the stick characters and platforms on the signs aren't exactly the most graphically pleasing things to look at, the city that it all takes place in - from the drains, to the fences, to the bugs that crawl along your play area - are stunning. Even more impressive are the transitions between scenes; when your stick man enters a door to leave the current area, the camera works to weave between objects and items in the 3D world, going inside of drains, through windows, and so on. It all works wonderfully to make the 3D world feel real and continuous.

The music is also fantastic at immersing you in the game's mini-New York world. The surroundings, combined with the ambient music, really work together to create a sense of realism. Unfortunately, however, I found that the music would freeze or jump, and this happened multiple times during my playthrough, usually when moving to a new area and the camera was panning to the next scene. Not game-breaking by any means, but it definitely broke the otherwise impressive sense of immersion. 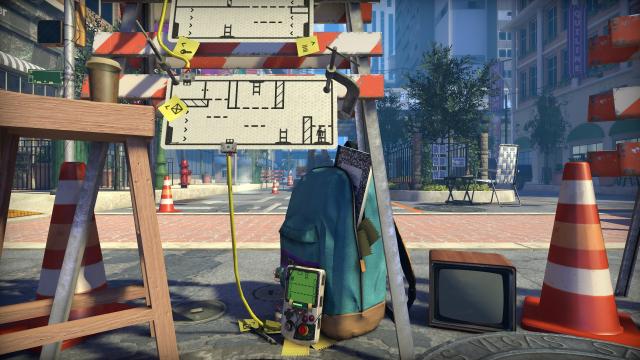 Another area of criticism? While it's good to have a tutorial, it would also have been nice if the game had an option to enable hints for certain puzzles. Don't get me wrong, The Pedestrian isn't particularly difficult, but there were some puzzles that had me scratching my head, unsure how to progress. A simple hint (such as a glowing line showing you how to begin to unravel the puzzle) would have made the world of difference in those cases.

This is also the sort of title that could benefit from a user-driven design mode, allowing the community to create and share their own puzzle creations. As it stands, once you've seen the ending of the campaign you have little reason to return to the game. 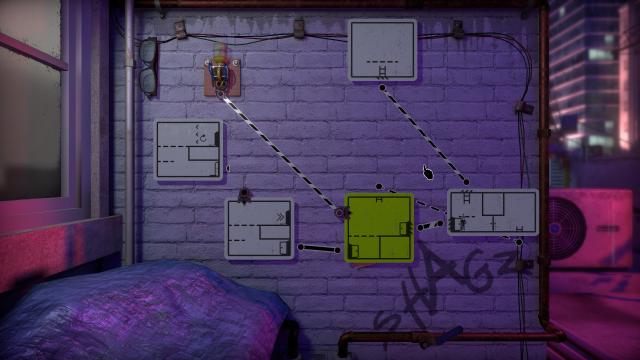 A unique and charming puzzle game, The Pedestrian may not break any boundaries in the genre, but its charming gameplay and unique aesthetic elevates it against its rivals. There's no real replayability, but the campaign is consistently entertaining and fresh, ensuring that this is one you won't forget any time soon.

This review is based on a digital copy of The Pedestrian for the PC, provided by the publisher.