For most people, nary a day goes by that we stop and think about our senses.  It’s strange territory to take a step back and consider what it’d be like to be deprived of one.  A developer duo, Punk Notion and Cubeish Games, try to capture that here in the puzzle-adventure context with Weakless.  In respect to creating something relatively original, these teams succeeded in exploring sensory deprivation through the lens of a childhood fable.  Unfortunately, the weaknesses in its brevity and game design keep it from blooming into its full potential.

The setting is a quaint forested area known as Hermitage.  You take on the roles of two tree-like protagonists: Blind and Deaf.  These “weavelings,” as they’re called, are part of a greater village that praises Resin.  The underlying pagan origins are wrapped in a kind of simplistic fable: these tree-people feel connected to a great tree that seemingly begins their circle of life.  But Deaf, a newborn, is born without the ability to hear.  The elder Blind, who can’t see, takes Deaf under his wing as a fellow outsider.  They’re soon compelled to save their world after a tragic event befalls it. 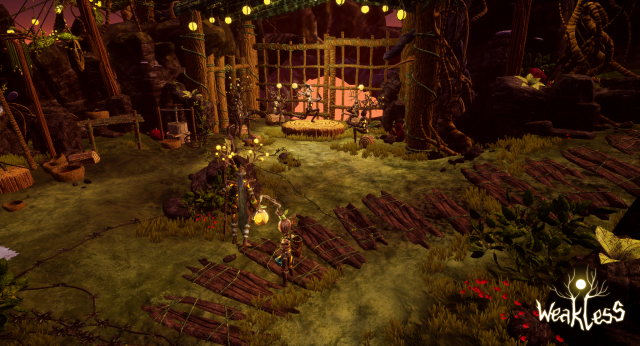 One of the most admirable decisions is making a story with no dialogue.  Only the visuals, environment, and cutscenes can inform the player of what’s occurring.  Weakless maintains this quite effectively with the storybook aesthetic for integral cutscenes.  Within the first minute, there’s a mini-narrative around how the community functions and the first level acts as gameplay exploration to see how other Weavelings “praise the resin,” as it were.  It also works so well simply because many can forecast much of the story long in advance.  If you’ve seen any nature-oriented story you know the themes Weakless is rooted in.

What makes the predictable plot more engaging are all the other elements around it.  One of the grandest positives would be what’s told visually.  The very design of Deaf and Blind have their own unique stories to tell.  The childlike sensibilities of Deaf are subtly communicated from the dried green paint on his hands and forceps; further, any moment you find a sitting spot for him he draws the landscape with enormous exuberance.  Contrast that with the more stolid Blind: eyes wrapped, carries a walking stick, and calmly enjoys playing various instruments whenever discovered.  Even more minute details like the tiny bell attached to Deaf or the gold-ball antenna protruding from their heads are such inspired touches.  When you’ve made instantly recognizable silhouettes for your characters you’ve succeeded in some small way. 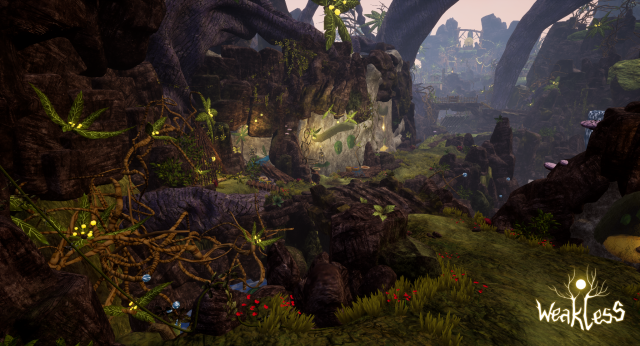 The visual texture extends to the larger world as well.  The variety from bioluminescent forest, ancient ruins, harsh swampland, and more oftentimes congealing with one another feels well-realized.  Many places have a distinct woodland aesthetic.  There are also little bits of world-building I couldn’t help but appreciate: by both characters standing on these strange pressure plates they’re able to watch a short clip made by an ancient civilization; it’s the equivalent of hieroglyphics transplanted into an animated 2D cartoon show.  It’s a minor addition, to be sure, but I can’t believe just how incentivizing it was to watch these short videos.

Sound doesn’t quite hold up to the same extent, if still respectable in its own right.  The sound design is basic, but is supplemented by the transitions between characters.  Jumping from Blind playing a small tune to Deaf and the subsequent audio drain always made me consider what the other is processing.  Although it’s fair to note playing as Deaf isn’t the equivalent of putting your TV or headphones on mute.  It’s closer to those speakers being cranked down to one from ten, both for sound design and soundtrack.  Weakless’ OST is actually a strong showing too.  It’s really surprising to see how creative Agnieszka Wlazły could get when composing this world.  Out-there choices like the udu and marimba play a role in certain tracks; and they’re cool creative ideas, but you know the level is running on too long when repetition sets in. 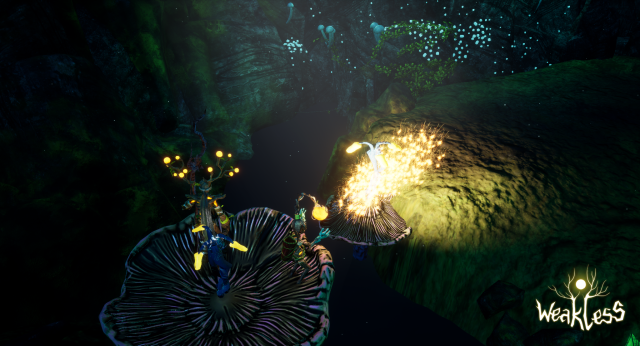 If I were to describe Weakless’ gameplay it would be this: good roots but the stem and branches are choked out by the surrounding thorns.  It initially opts to be a breezy time as you’re slowly introduced to a character's strengths and weaknesses.  Deaf plays like a typical 3D puzzle-platformer with regards to movement.  His special aptitude is blowing pollen onto a plant’s pistil to open it up and climbing specific platforms a la Nathan Drake—minus the dexterity.  Blind isn’t necessarily unable to see anything; instead, the camera transitions to a pulled-back viewpoint akin to a top-down isometric shooter.  His “vision” is similar to a bat’s echo-location and everything is in a black-and-white color palette.  He’s also able to temporarily expand his surroundings by jabbing his stick into the ground and is able to move heavy objects.

The problem with this structure is how underutilized the potential for this duo ultimately feels.  I can try to appreciate a slow build-up in ideas, but the repeating construct of Deaf climbing something and doing some menial task or Blind just having to move a big cart doesn’t have a semblance of challenge.  And that’s an even greater shame because I like the more complex puzzles.  Creative ones like the conveyer belt conundrum where both parties are separated and it’s reliant on Blind to track the conveyer’s movements was an exciting time.  There’re some other puzzles which showcase the dependency both characters have for one another, but it feels like there should’ve been more. 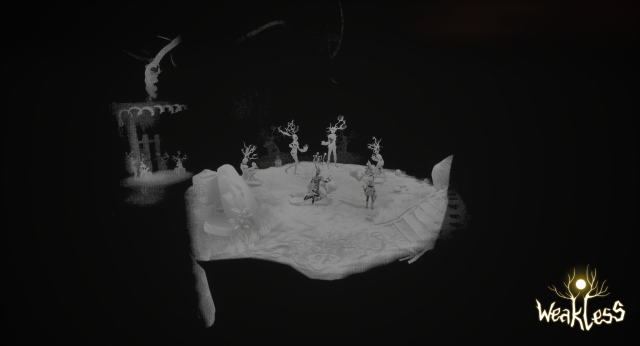 Brevity hurts this adventure slightly more than with other games.  Harkening back to the buildup complaint, it's deflating to reach this ending when considering how quickly the game's game design strengths come and go.  Just as more time is given to world-building, the puzzle complexity is increasing, and character development is being solidified, suddenly the credits come in.  The short length also butts heads with the $20 price point.  It’s a game you’re likely to complete in two hours, maybe two-and-a-half with collectibles, and the consumerist side of me has to consider that when evaluating a game.

Ultimately, Punk Notion/Cubeish Games’ newest title is tough to critique because of its tragic balance between dozens of wonderful small qualities balanced out by several detrimental fallbacks.  It feels like some up-and-coming creatives who’re expanding their final game-school demo into a full product, with all the issues that’d come along with that.  How it fern-ly strives to go the dialogue-less route with its storytelling, the interesting visual/aural qualities breathed into its world, and the momentary good puzzle are sapped by poor pacing and distracting brevity.  In essence, Weakless has fundamentally solid roots but inconsistent design causes this experience to wither on the vine.