Night School Studio’s first effort, Oxenfree, is one of my favorite surprises of this generation.  It’s a game that retools TellTale’s adventure template with some gameplay nuances and had the earnestness of a quality young-adult novel fused with a campfire story.  It was an effort of respectable proportions for a young team.  Fast-forward a few years, leap-frog over their Mr. Robot licensed mobile title, and Night School has returned to consoles & PC with their next original IP: Afterparty.  And it showcases several tonal shifts in both their narrative's attitude and design philosophy, not all of which I can get behind.

You take control of Milo and Lola, best friends who discover they’re dead and are Hell’s newest occupants.  Understandably, they’re distraught over the idea of an everlasting punishment being their new 9-to-5.  But there’s a catch: outdrink the undefeated Satan and he’ll resurrect their earthly vessels. 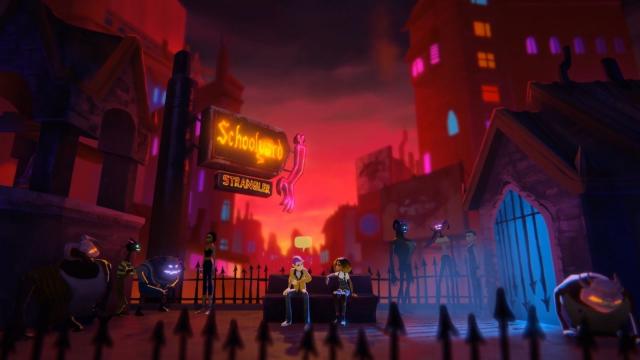 As mentioned in the intro, Afterparty’s aesthetic and narrative hook falls towards a different spectrum of Halloween-themed concepts: less unsettling atmosphere of the unknown and more juvenile keg-parties with everyone dressed as demons.  It’s like stumbling from the set of a Blumhouse production horror flick into a Judd Apatow skit.  While that can work in its own humorous way, I’m framing it as such to explain the tonal whiplash I felt when considering Night School’s two IP’s back-to-back.

That’s also communicated through some of the dialogue too - the intentional over-written moments with Oxenfree’s high-schoolers feel more authentic than Afterparty’s epithet-laden script desperate to squeeze out some laughs.  If Hell exists and I’m going there, The Devil can take note: incessantly spewing Joss Whedon-lite comedic quips would be the most effective punishment towards me. 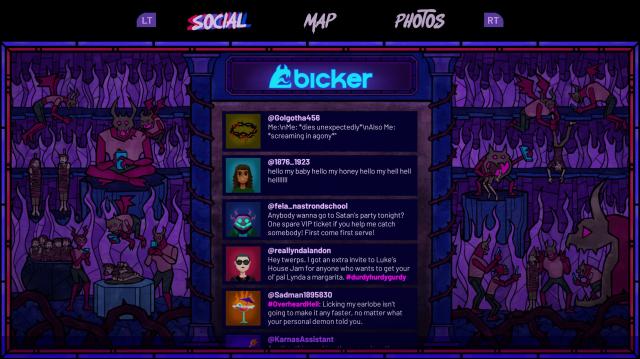 None of that’s to say the narrative is hellish; in fact, I was mostly engaged by everything else on offer.  Whereas Oxenfree kept details of the island close to its chest, Hell and its occupants get time for expansive world-building that’s strategically incorporated into the protagonists’ personal journey.  Obviously, it’s going to rely on The Bible, but it also extrapolates from other sources to make its own blend of demon lore and history.  Even the comedy around these ideas often lands.  When Night School is setting up short visual gags, simple punchlines, or vomiting subtweets via Hell’s social media site, Bicker, the atmosphere complements Milo and Lola’s personal journey.

That journey takes some genuinely interesting turns too.  As stories tend to go, the simple task of challenging Satan becomes more dynamic and oddly personal towards the climax.  What seemed like simple A-to-B tasks to escape Hell aren’t so easy.  Said decision-making is made all the more frustrating by Milo and Lola’s personal demon, Wormhorn, who’ll perfectly interrupt at the most inconvenient moment to challenge the past decisions you’ve made.  It’s a great system to supplant versus a typical good/bad dichotomy.  The two protagonists have their own believable insecurities, but they didn’t feel as well-rounded as I’d expect.  It’s like they were drowned out at a real party; an enjoyable roster of strange characters makes them lose some spotlight. 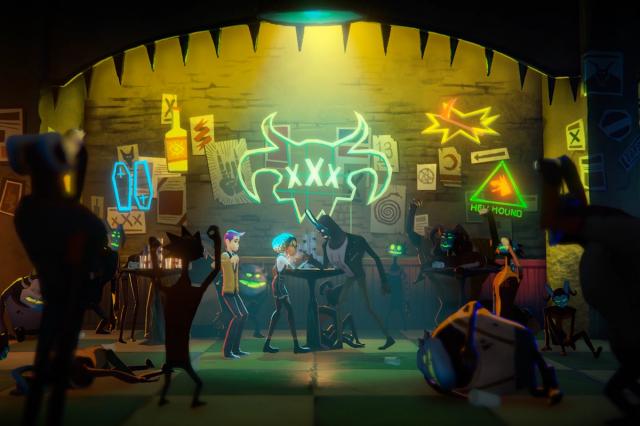 Overall, Afterparty still has a worthwhile story to tell with some interesting characters but can’t help in allowing tacky script-writing to periodically get in the way.

What’s more of a disappointment to one’s immersion isn’t the underwhelming jokes but the technical issues found throughout.  It’s a shame how often you’ll be invested in many of these colorful environments only to see an action you perform results in clipping through an NPC.  There was also a strange issue involving Milo and Lola’s cab driver, Sam.  For the last twenty minutes, she made a scripted movement which locked her arm in place like she was raising it to answer a teacher’s question in perpetuity.  That example is a great demonstration of Afterparty’s technical performance in a nutshell: not broken, but clearly needing another round of polishing.

The art style is a better story, but not without complaints.  The environmental design and color scheme have something of a ‘chic-gaudy’ appeal that works well with the theatrical tone.  An especially nice detail is the wild assortment of alcoholic drinks at each bar.  Although there’s negligible gameplay variation between which drink you choose, there’s a stimulating quality in selecting between a Martini with severed fingers floating in it and a tall glass of sizzling battery acid.  What’s more disappointing is the flat, generic character models for all the humans.  Oxenfree tackled those limitations with a more zoomed-out camera and a painterly aesthetic which Afterparty ignores to its detriment.

Sound reigns as one of the most consistent qualities all around.  There’s a solid roster of voice actors here with Janina Gavankar and Khoi Dao playing Lola and Milo respectively.  They bounce dialogue off each other effectively while Ashley Burch’s Sam is another clear highlight.  There are a couple of examples where I couldn't help but hear the voice actor on the other side, such as with Alanah Pearce as the dance-off DJ or Erin Yvette as Wormhorn.  The soundtrack and sound design do a satisfactory job in capturing this off-beat premise as well.

Gameplay remains closely what you’d expect for a narrative-driven adventure in the vein of TellTale.  You’ll navigate around an environment, select on a context-sensitive item or person, and make some dialogue choices along the way.  Sometimes dialogue options are faded out and can only be unlocked after drinking some alcohol.  It's a cute gimmick at first, but it’s such a... ‘nothing mechanic’ with no long-term appeal.  You just hit [RT] during dialogue moments and the option is available.  The conversational mechanics feel less engaging than the interruptions one could do in Oxenfree too.  There, the mechanic fit perfectly with the impatience of any teenager; here, selecting an option often makes your character wait their turn.

Aside from talking, there’s not much else besides exploration and some drinking-themed mini-games.  The exploration slightly supplements replay value at a few critical moments, but it’s mostly limited to having a few more opportunities to interact with different places or people.  Your runtime with this modest adventure will last approximately five hours.  Forking paths introduced at specific story junctures tempt me to do a second run; and yet, the disparate consequences harm my enthusiasm to retry since I enjoyed my original story already. 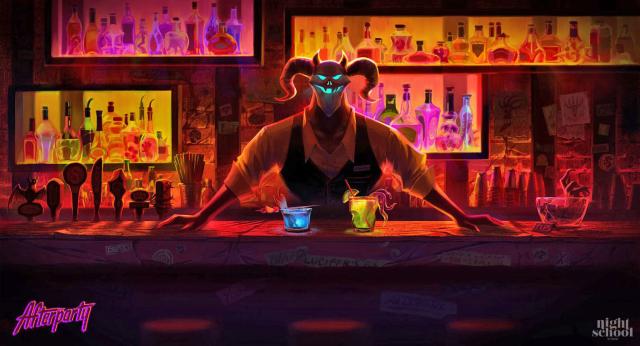 Afterparty’s Hell is paved with good intentions, perhaps to the chagrin of its overlord.  What begins as a frat-boy-esque fantasy takes several turns to examine the genuine—dare I say human?—internal conflicts demons and damned souls have to face.  It’s a game more reliant on the strength of its narrative, voice acting, world-building, and art style to carry the experience.  And while those mostly succeed, it’s strange to see how often it fumbles in design compared to its own spiritual precursor.  Oxenfree wasn’t without issues, but I don’t recall this many technical bugs; further, its game design felt more intentional and interconnected with the larger whole.  As my constant comparisons suggest, Night School’s newest title is a tougher recommendation yet buoyed enough by its more heavenly qualities for those hungry for an off-beat story-driven adventure.

Pretty much agree with everything. A decent game but don't really fancy another playthrough. Oxenfree I played 3 times :P

Thanks for reading. You know...I'd like to do another playthrough of Oxenfree when I get the chance. So much else to cover! 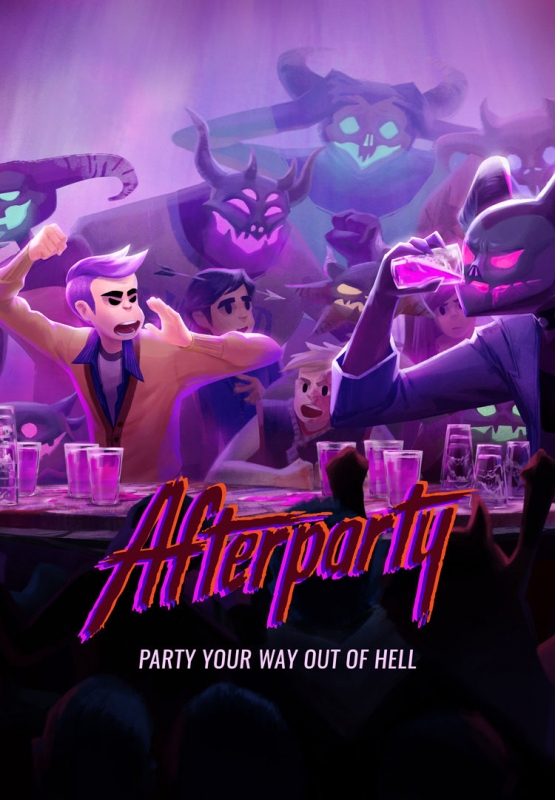