The 2D platformer genre certainly didn’t begin with developer Playdead; and yet, the bleak tone and their signature visuals transplanted onto this old-hat template rewarded them the progenitors of a novel personality.  Between development assistance on several AAA studios' tent-pole titles, SkyBox Labs found time to craft their own platformer in Playdead’s mold: Stela.  Although the technical craftsmanship surpasses many of the amateurs who’ve tried their luck before, it’s another example of a game too often trekking the well-worn path of its inspiration.

Stela places you in the feet of an unnamed woman who’s awakened in a cave.  The only thing keeping her company is a floating obelisk in the background and all she has are the clothes on her back: white shirt, pants, shoes, and an elegant cape-scarf.  From the opening, it’s clear that this strange world and your place within it has a deeper mystery to unravel. 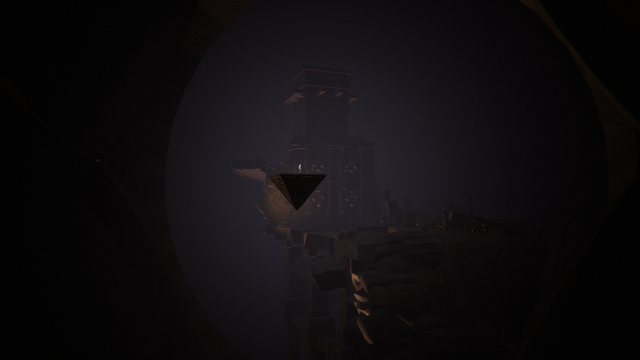 Unearthing anything of meaning is often a struggle, however.  It models itself closely to LIMBO in that respect, where the game’s marketplace description provides more context to your incipient actions than just running right.  Since Stela’s storytelling doesn’t rely on any spoken dialogue, environmental clues and visual metaphors bear the brunt of conveying your greater purpose.  This opaque approach sporadically works.  The incipient level described above has Christ-like allusions to the player-character’s ultimate goal, but even that’s a tenuous interpretation at best.

What often hinders the game’s grander intent of poignant revelation is a lack of narrative cohesion.  It’s often a set of sequences searching for purpose.  Too rarely does Stela utilize the environment to do much more than act as decorative window-dressing for a puzzle.  One of the ways it feels spliced is actually a technical one: loading screens.  Compared to INSIDE, the segmentation of each set piece moment exhibits the artifice all too easily, despite wanting to make it feel like a realized world.

Stela’s abstract meaning and minimal context renders player interpretation pointless.  It often trundles along with scant details about what this world was like before its impending destruction.  I’ll admit there were some awe-inspiring moments where I think I grasped the intention, but too often it felt like a 1st year art student’s self-absorbed endeavor to say their unpainted canvas is true art. 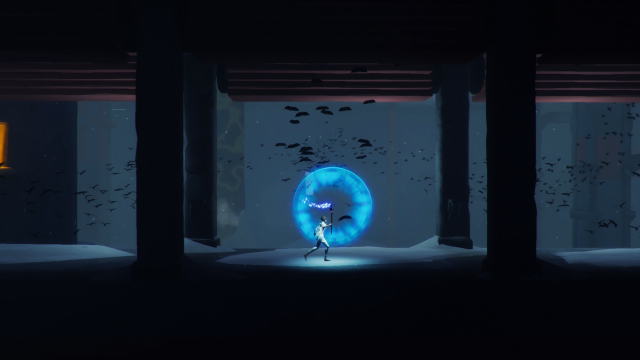 A lack of effort is no issue in respect to visuals and atmosphere.  If there were a somber 2D platformer to look towards it would be Playdead’s house style.  There’s an interesting asymmetry at play here: the luminous player-character in the beginning has a brighter appearance that’s often greyed by the harshness of the elements.  For a time, you’re greeted with subterranean sanctuaries that feel awe-inspiring and imposing all at once; the next, you’re in a tawny forest with robotic variants of Until Dawn’s Wendigoes.  These environments and more are all captured by excellent shot composition too.  There’s enough fresh material in screenshots and gifs here to run a limited art gala event.

It’s becoming an expected template but a similar level of admiration can be extended to sound design as well.  The precision of the diegetic sound effects, from the wildlife or elsewhere, matches the ominous setting to a tee.  It’s complimented by a soundtrack that made several intense moments so memorable.  Admittedly, a minority of Riccardo Amorese’s tracks feel overproduced—desperate to squeeze emotion out when I’d rather soak in the landscape.  It’s otherwise a good OST that captures the intended mood.

Even if it too often stumbles with subtle storytelling, the platforming is serviceable and satisfying.  In respect to sensation, I can’t get enough of how well the character animation communicates the same desperation I’m feeling.  Landing on your feet can be quite simple in most platformers; Stela’s protagonist is not such a case.  From the rough tumbles to the excessive panting after sprinting from immediate danger, her behavior is so tangible.  The best way of showcasing her perseverance is through visual communication of how dire the situation feels.

While detailed contextual animations are fantastic in motion, it’s a shame just how blasé I felt about most deaths.  There's a subset of gamers & critics who are ambivalent of Playdead’s trial-and-error approach with some puzzles.  Due to bad sign-posting, some dilemmas may feature something you misjudge in order to highlight the consequences.  Utilizing brute force may seem contradictory, but I’ve always found the viciousness of those fail states to inform the world and narrative.  Whether it’s the full decapitation from bear traps in LIMBO or a doberman's sharp teeth yanking at the boy’s limp body in INSIDE, it serves as part of the wider game in showing such sadistic indifference.  Here?  Whether smacked by a bipedal monstrosity or shot by arrows, most failures result in her listlessly falling over again and again.

In respect to puzzle structure, it often falls towards a motley set of situations which emphasize close calls and action moments.  Whether from bugs or burrowing creatures, those narrow escapes remain gripping both in their surprises and environmental variety.  But in regards to complexity there are few that will impress beyond a couple of lever brainteasers during the main course.  To avoid giving away much, the ending’s weirder setting and ruleset presents more arduous puzzles; conversely, they feel slightly padded and strip away the tangible sense of accomplishment felt from before.  Forward movement feels akin to entering a new warp zone than how you previously navigated dilapidated buildings and ruined temples.

Games of this subset tend to run on the shorter side, relying on collectibles, challenges, or just the memories themselves to buoy the value of the typical $20 asking price.  Stela isn’t much different.  Although not having any collectibles, the 2.5-3 hour runtime is supplemented by separate speedrun & no-deaths achievements.  And while there are undoubtedly many engrossing moments to behold, some feel fleeting compared to the forebears it tries to emulate. 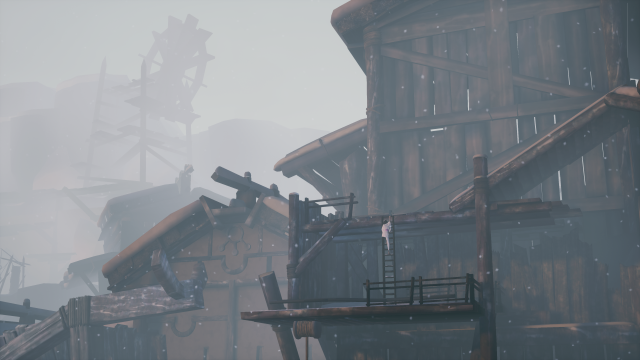 “Take a drink every time he references either of Playdead’s titles.”  If any reader took up said deal, I apologize for hospitalizing you.  But it’s tough not to continually compare when SkyBox Labs brazenly imitates so often.  That in and of itself isn’t egregious—especially since it’s such a polished example.  Refinement this rare, in such an exploited platformer phylum, is the focal point of why I typically felt engaged.  However, it’s also tough to elevate it among prestigious counterparts when nuanced ideas aren’t fully realized and are often mired by abstruse symbolism.  If INSIDE demonstrates a poignant story can be shouldered solely through unstated background details, thick atmosphere, and a depressive art style, Stela demonstrates it’s tougher than it looks.

Despite being one of newest writers on VGChartz, Lee has been a part of the community for over a decade. His gaming history goes back several console generations: having a N64 & old NES at home while also enjoying other console/PC titles elsewhere. Since then, he's always liked gaming across various systems--though real-life makes it burdensome at times. Lee's a General Contractor by trade, and has touched upon every critical aspect necessary to maintain a house - roofing, electrical, plumbing, and more. When not doing the daily grind, he can be found gaming (obviously!), writing about games (obviously, again!), doing various recreational activities, or slowly grinding through the world's most-acclaimed books.

This review is based on a digital copy of Stela for the XOne, provided by the publisher.