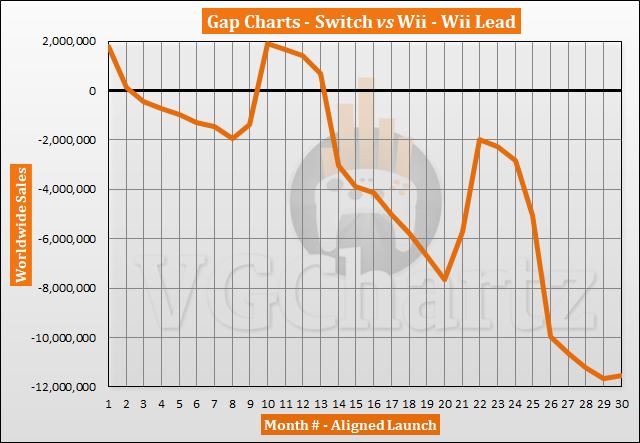 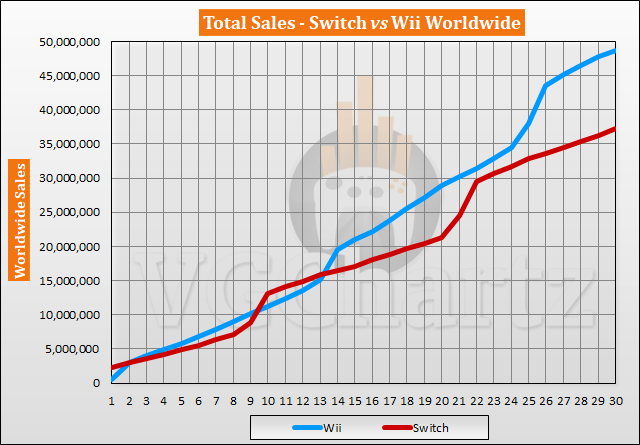 August 2019 is the 30th month that the Nintendo Switch has been available for. During the latest month the Switch caught up with the Wii by 117,376 units. In the last 12 months the Wii has outsold the Switch by 5.76 million units. The Wii is currently ahead of the Switch by 11.53 million units.

Switch is likely to have significantly better legs than the Wii

Gaining ground on the Wii during month 30 is extremely impressive. I really didn't think any console could do that outside of a holiday boost.

And here comes the turning point until Wii's next holiday season.

There was no such an early turning point in the 2 previous years.

Exactly, if the Switch managed to get a way better performance this august compared to the 2 previous ones, then the Switch lite in september + strongest holiday season yet (w new pokemon and a 200$ model) might give the Switch an incredible boost. It won't take the advantage but will position the Switch in a lot closer i think.

Well, I am buying more stocks now because I believe that they will make the biggest Q3 ever in the video game history... They are really giving a huge load for this Sept-Nov

Yea, I mean analysts are thinking it could make the best Q3 in the US since Xbox 360 in 2011. Add to that the insane numbers from Japan and it doing better in Europe, it will be huge. 2020 is starting strong as well

however here comes the weird generation in that are nintendo consoles .. wii here in april 2009 is 4 years away of the new console and have much more to sell .. but the switch is almost 1 year away from the ps5 and xbox two, and so nintendo console are different type yes, but this new generation next year can lower the switch sales a little bit, than what would be without a new generation next year .. so now is the time to sell switches because ps5 and next xbox are coming with full force

Well why would they affect it if Switch was performing really well while PS4 was at its peak. Switch is still going to be - unless proven wrong - the only device like it on the market. It has yet to peak it seems and new gen arent as aggressive as a PS4 with lots of exclusives and promotion/price cuts. On shelves you will have a PS5 à 500$ against a Switch that has a bigger library, probably a price cut to 250$ and a lite at 200$. Gamers will still buy it cause it offers a different experience and the big market will buy it cause it's getting cheaper.

It's still possible that we see a Switch Pro next year. The new hardware might not be as powerful as PS5/Scarlet, but attractive enough for power focused gamers.