A Look Back #2: Transistor - Article

Developer SuperGiant Games is best known for giving the world Bastion, which was superb, so when Transistor was announced few questioned that it would be a unique and fun experience. So it proved to be - Transistor nails it, an action RPG with a striking art style, absorbing music composition, and engrossing tactical combat. Transistor was the epitome of how exceptional indie games could be in the early days of this current generation. 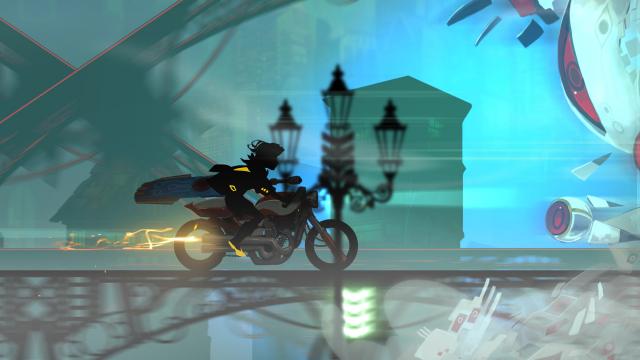 Playing Transistor gives the distinct impression of being a techno-assassin set loose in the cyber world of your computer. You play as “Red” (aptly named after her red locks of hair) and are dropped into the thick of things with little to no explanation. SuperGiant specifically wanted to keep most elements of the game a mystery, so you can enjoy the experience and story as it happens, something few developers take care in handling properly anymore. For this reason, I won’t talk about the story too much.

Get with the Program

At the game’s opening, you’re standing in front of a dead guy on the floor with a massive sword hanging out of his chest. Oddly enough, the sword tells you to pick him up and get going. That’s right, the sword speaks. Apparently, the 'soul', or 'Process' as it’s referred to in the game, is what the main characters leave behind in cube form when they die. When you acquire a Process it becomes a new attack ability to add to your repertoire.

Each of the Square, Triangle, Circle, and X buttons are slots for your attacks. Each Process that you assign to a slot requires a set amount of memory to use, just like RAM for your computer. At the beginning of the game you have approximately 6 bars of memory available for Processes, and each new Process ranges in cost from 1-4 bars. Once your memory is full, no more attacks can be assigned. 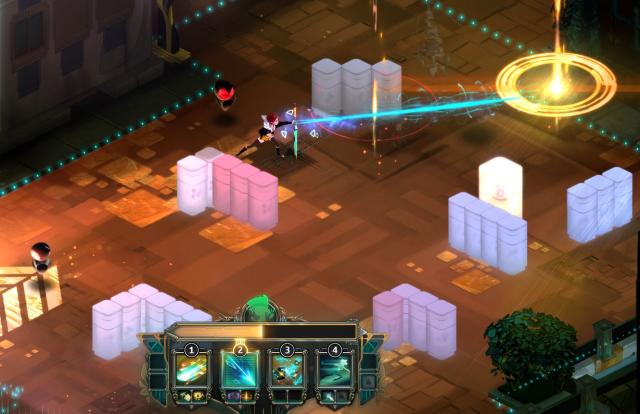 The combat in Transistor is simple, yet deep. As you free-roam through the environment you have the option to attack enemies immediately with the skills you’ve acquired, just like in any action RPG. Your massive sword makes attacking a somewhat slow affair, though. However with the press of R2 you enter a stopped-time 'Turn'. During this Turn you can strategically plan out your attacks, seeing how much damage will be inflicted, and then execute them once planning is complete. A planning meter represents the actions you can take at the top of the screen. Each attack takes up a chunk of the meter, as does physically moving across the terrain. Once you’ve mapped out your attack, you initiate it, and watch the mayhem ensue as Red rips through enemies, one after another. Time is significantly slowed once your attack actually takes place and usually all attacks land before enemies even have a chance to move. In the late game, though, some enemies can warp out of the path of your attacks, so you’ll have to plan accordingly. 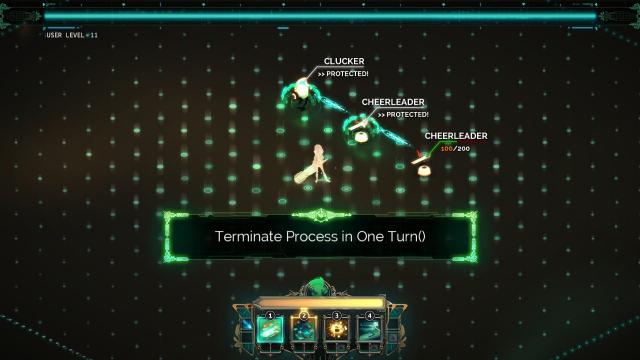 As you progress through the game and kill the sentient enemies that reside in the city of Cloudbank, you level up. At each new level attained you're presented with a few upgrade options. These upgrades range from more memory (bars), to passive ability slots, upgrade slots for your existing abilities, new abilities, and limiters.

Limiters are added functions that limit your effectiveness in some way, in exchange for extra XP. For example, one early limiter you gain access to is called Efficiency. This limiter enables the enemy to strike with twice as much power. You, the user, will gain a level bonus of 4% for each kill. So it’s a tradeoff. It basically gives you added experience for a troublesome cost. I found it to be a fairly creative way to tune difficulty, as there’s no difficulty choice in this game (no easy, medium, hard). By adding these limiters, more experienced players can stack on the limiters and increase the difficulty of the game, while reaping the rewards in the process. 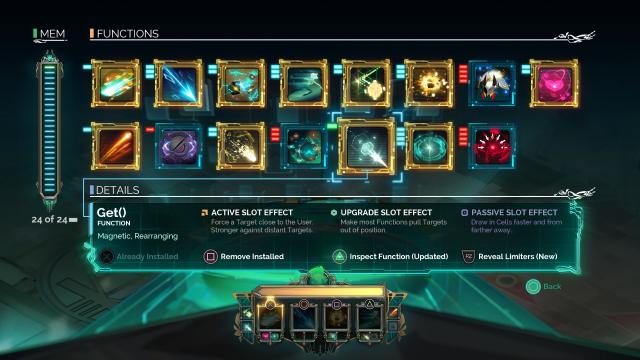 When the sword speaks, it flashes in rhythm, and so does the light bar on the PS4 controller. There’s a setting in the options that allows you to set this audio to the controller speaker, which is off by default. I thought that was a mistake, and upon trying it, immediately loved it. To me it just deepened the connection between myself and the Transistor when the audio came from the controller. I very much felt that the bond with the Transistor was my own, as he’s regularly chatting with you, guiding you, and commenting on the on-goings around you. By having the audio come from the controller, in conjunction with the flashing sword on screen, and on the light bar, it effectively creates a link between the game world and the real world.

Transistor is such a well-designed game. I can’t over emphasize how perfectly everything blends together to make an outstanding gaming experience. The environments, the art design, the music, the mechanics, the voice acting, the strategic planning - all of it is superb. I’ve never been one to fancy the music in a game. Usually I don’t notice it all that much unless it’s the main theme, or simply a poor choice for the game, but the score really stood out to me in Transistor, almost like it was a character itself. It impeccably evokes the mood and atmosphere of the world. 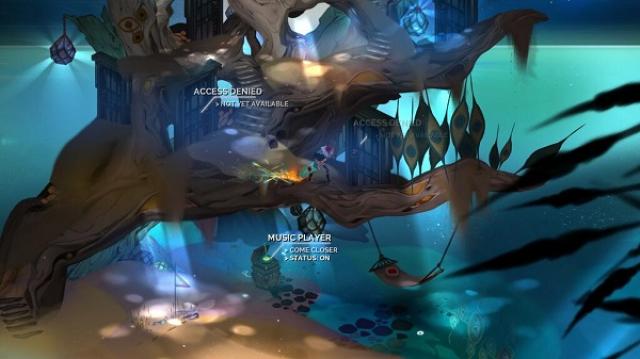 Another exceptional component of design in Transistor is the combat abilities and how they’re handled. In most games, when you die in combat you restart from the last checkpoint. This can really slow down or hamper the forward progression and experience of the game. When your life bar is depleted in Transistor, one of your Processes (attack abilities) is overloaded and removed from use. So, in essence, you can die several times, but not have to restart back at the beginning of a difficult section of the title. It’s not without repercussions, of course; that favored attack is now lost to you.

Overloaded Processes can be restored after reaching OVC Terminals (basically save points). OVC Terminals are also where you can change up which attacks you have slotted and fiddle with upgrades/limiters. Furthermore, it’s a great mechanic for getting you to change up favored abilities. Instead of sticking with the same four abilities throughout the game, you find yourself replacing overloaded functions with new ones, and gaining a pleasant new outlook on battles. You can literally mix and match your abilities at will and always find new ways to approach combat, each as effective - and fun - as the last favored setup. It’s all a testament to the masterful design in Transistor. 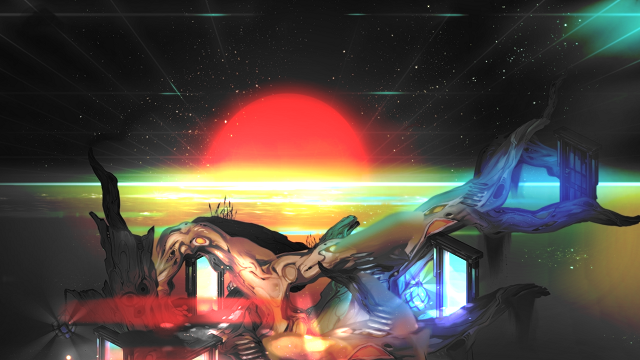 Every aspect of Transistor adds to the whole, and you know it was made by gamers for gamers. Combat is fun, abilities are varied and a joy to use, the music moves you, the atmosphere grabs you and transports you into the world, the voice acting is emotional, and the use of the controller’s features is simple yet effective in linking you to the game on screen.

In a world of sequels and recycled gameplay experiences, fresh new IPs like Transistor, with its creative take on common tropes, leave me feeling excited for the future of gaming. Transistor is a fantastic title that should not be missed. If you didn't play it back in 2014, do yourself a favor and pick it up now. Looking back, it’s one of my all-around favorites of this generation.

I made the mistake of thinking it was going to play like Bastion. I don't find tactical, turn-based rpgs enjoyable personally. I keep wanting to get into them, but I start to get bored and annoyed when I don't know what I'm doing with this genre. I have Transistor and find it beautiful. The music is fantastic. Just wish I had more interest in turn based rpgs.

Still need to install it. 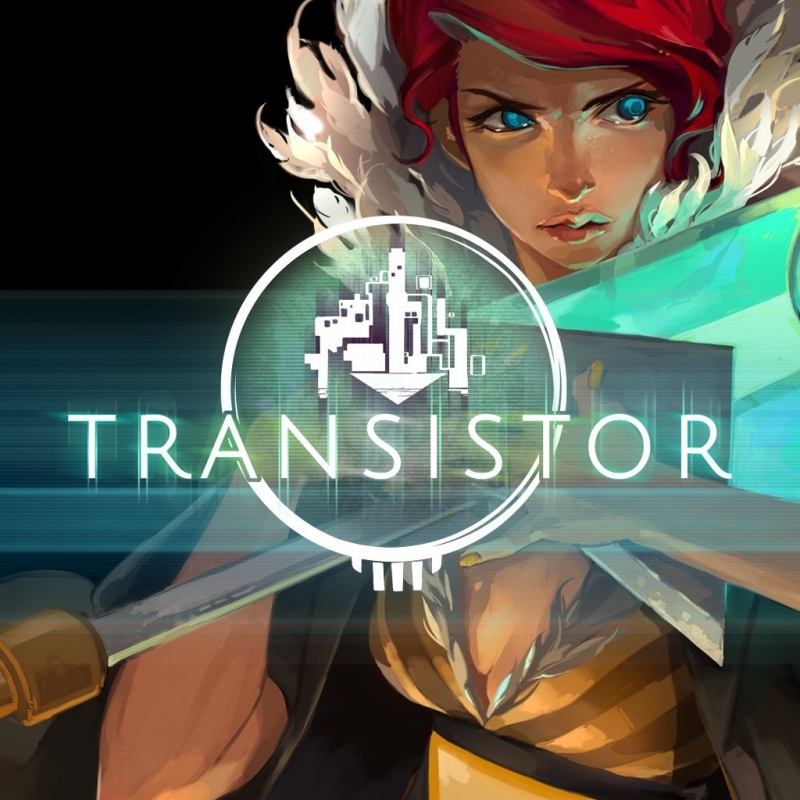 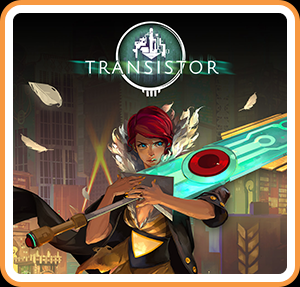 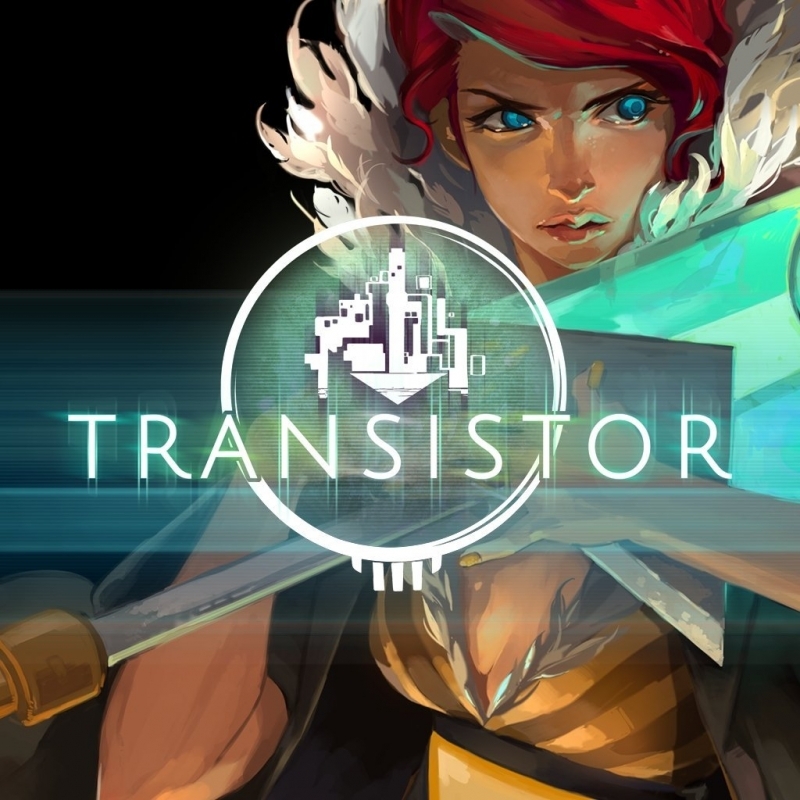