Rarely will a banner image tell you exactly what to expect from a video game. In the case of Metal Wolf Chaos XD, everything you need to know is right there—a mech holding a mini-gun, posed heroically against the United States flag. It's a perfect visual metaphor for a third-person mech shooting game with a huge arsenal of weapons and an over-the-top, satirical take on American jingoism. It's also an image that's probably unfamiliar to most, as Metal Wolf Chaos XD, an updated re-release of Metal Wolf Chaos, released exclusively in Japan in 2004 on Xbox, marks the first time the title has hit non-Japanese shores. Thanks to publisher Devolver Digital, porting company General Arcade, and original developer From Software, the game has arrived almost completely unaltered—minus some audiovisual touch-ups—which means players can experience the incendiary action, hilariously cheesy storyline, and uneven difficulty of the original game.

With its parody of American patriotism, excessive gun violence, exaggerated voice work, and bonkers plotlines, the story in Metal Wolf Chaos XD is something of a subversive work of art. It follows a military coup in the United States, where soldiers led by Vice-President Richard Hawk seize control of governmental and civilian centers all across the country. The only man who can bring freedom back to America is the 47th President of the United States, Michael Wilson, who introduces himself by crashing out of the White House in a mech suit. Yes, in this game you play as the American President, who carries a grenade launcher and a shotgun and yells things like "suck on my missile punch!" The writing is absurd, in a knowing way, the voice performances would make the biggest Hollywood ham blush, and the whole production in one deep-fried pick-up truck short of being the most American thing ever. 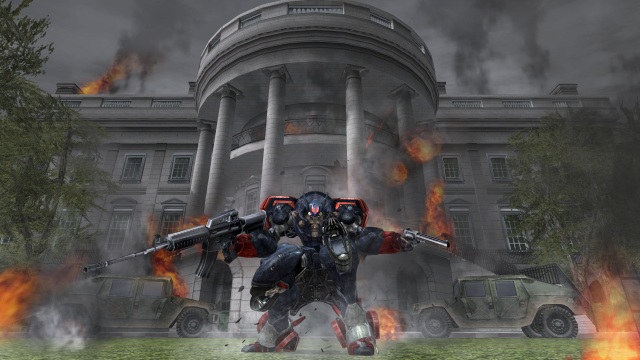 The action in the game is as explosive and extreme as its narrative. Players will pilot Wilson's mech across 13 levels, tearing through destructible buildings and punching holes in enemy infantry, armor, and installations. Thanks to tight, responsive controls and the mech's inherent flexibility, it's a joy to move back and forth between skirmishes, jumping, dashing, and swapping weapons on the fly. Cycling through dual-wielded weapons with the trigger buttons is a tad cumbersome, but overall the experience is smooth and intuitive.

Overall, Metal Wolf Chaos XD embraces an arcade outlook, with fast-paced, action-oriented gameplay. There are some light strategic elements—players can change loadouts, invest in new weapon tiers, and purchase different firearms between missions—but in general this mech adventure is about quick reflexes and visceral thrills. 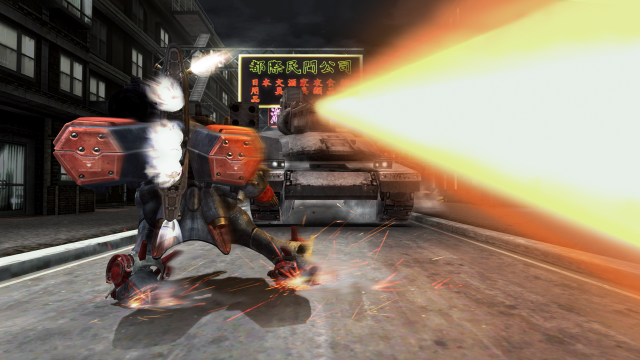 It's also, in line with its arcade sensibility, a game about trial and error. With limited pre-mission briefings, zero checkpoints, and sudden, seemingly-random difficulty spikes, it can be tough to prepare for (or even survive) objectives on the horizon. Where some missions are surprisingly short and easy, others are drawn-out and punishing. A late game battle in Washington, D.C. starts with an extended search in an underground labyrinth and finishes with a taxing, fussy boss fight. Mess up the climactic battle, and it's back to the garage to retool and start from square one. Replaying levels is almost necessary, either because you selected the wrong loadout and ran into a brick wall or because you need additional resources to research and craft stronger weapons in order to topple some bullet-sponge boss.

Replaying levels isn't bad per se, but it can prove tiresome since so many of the missions in Metal Wolf Chaos XD overlap. Apart from a few exceptions—most notably a wild west showdown with three rival mechs packing stealth technology—President Wilson will run from point A to point B, where he'll destroy all target areas. This means you'll be firing shells, bullets, and grenades into the same control towers again and again.

Fortunately, From Software has tucked away several optional challenges and hidden weapons in each level to soften the tedium and reward repeated attempts. In caves, corners, and alleyways are hostages, powerful firearms, and energy pods, which increase the mech's shields. 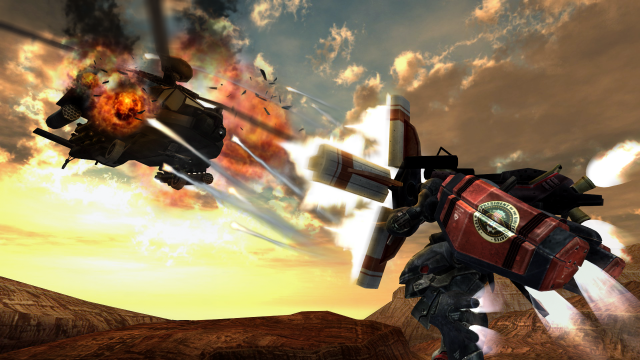 Metal Wolf Chaos XD remains true to its 2004 roots, then, in terms of its satirical storyline, repetitive mission structure, and proclivity for arcade action. Devolver Digital, General Arcade, and From Software have done this intentionally, with an eye toward preservation rather than renovation. While the game enjoys some improvements like upscaled textures, a redrawn user interface, and remastered voiceover files, the original experience arrives intact. Due to the game's limited release on Xbox in Japan only, it's an understandable decision. This is the full, unadulterated adventure as designed 15 years ago—for better or worse.

From its key art to its over-the-top opening cinematic to its excessive, exaggerated gameplay, Metal Wolf Chaos XD is immediately transparent about its intentions. It exists to deliver explosive, replayable arcade action wrapped in an outrageous, scathing send-up of American politics and culture. Difficulty spikes and repetitive mission design prevent it from joining the ranks of From Software's modern-day masterpieces, but altogether it's a competent mech action game.

This review is based on a digital copy of Metal Wolf Chaos XD for the XOne, provided by the publisher.

I can't just read a review about this game and not comment. And the reason is--I'm the President of the United States.

I was always curious about this game so I bought it for X1. Its charming but not a great game, not unlike Earth Defense Force. Its a reminder why we don't see many 6th gen ports, they didn't age well.