Every now and then a tribute game arrives that equals or surpasses the original. Freedom Planet, for example, is as good as any Sonic the Hedgehog game. The latest title to earn this honor is Blazing Chrome, a run-and-gun 2D action game that traffics in the mechanics and operates according to the gameplay cadence of Contra. Unexpectedly, it's as good or better than the classics of that franchise, thanks to diverse level designs, grotesque enemies, tight controls, powerful weapons, support for two-player local co-op, and unlockable characters and modes. The only downside is that it's short and sometimes painfully difficult.

The story in Blazing Chrome is slight, befitting its arcade sensibilities. In the far future, in AD 21XX, computers and robots rule the Earth. Humanity stands on the precipice of destruction. In this age of hopelessness, two heroes infiltrate enemy territory to strike deep at the heart of the artificially-intelligent menace. They are Mavra, a "super badass" human resistance soldier, and Doyle, a beefy attack robot reprogrammed to fight for the human rebels. Together they'll shoot and claw their way through five enemy lairs and hopefully deliver a crushing blow for mankind. 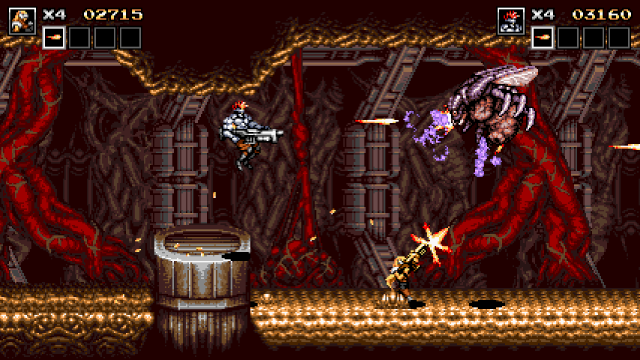 It's a cheesy sci-fi story, typical of the testosterone-fueled 1980s, but it works. Why would a robotic terminator sport a bright red mohawk, you ask? Because video games, that's why. An over-the-top action experience like Blazing Chrome demands a ridiculous premise and outlandish personalities, after all. Furthermore, while the game doesn't belabor its story-telling or world-building, it does include opening and closing cut-scenes—bookends that introduce the characters and commemorate the end of their journey. It's not worthy of the cinema, but it's what you'd want and expect from a 16-bit action title.

Similarly, gameplay in Blazing Chrome is everything you'd expect—and then some. Like the Contra titles that inspired it, the game embraces fast-paced run-and-gun action along a 2D plane, with plenty of monstrous enemies, environmental hazards, and crushing weapons. Playing solo or with a local co-op buddy in tow, players will shoot down attacking enemies, contend with screen-filling boss baddies, and participate in a few special events—for example hoverbike segments and a Space Harrier-esque behind-the-back rail shooter sequence. 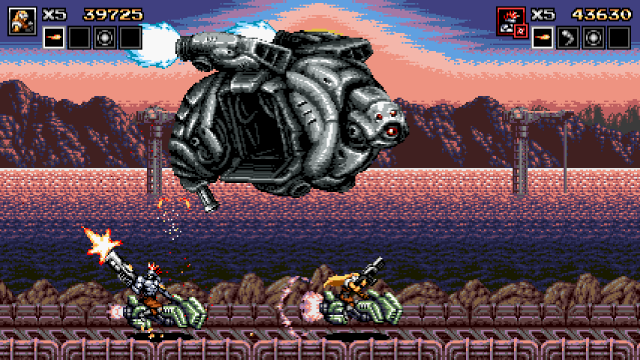 These events, which also include mech suit combat scenarios, are engaging interludes between the rock-solid shooting that forms the foundation of Blazing Chrome. Overall, the game plays like something halfway between Contra III: The Alien Wars and Contra: Hard Corps. It takes the speed, tempo, and intuitive controls of the former and combines it with the multiple playable characters and weapon options of the latter. Those weapons, by the way, include your standard rapid-fire machine gun, plus several powerful alternatives like an arching grenade launcher, a short-range pulsing energy whip, and a laser gun that can be charged to deliver a devastating, constant energy beam.

Essentially, Blazing Chrome extracts the most meaningful parts of two of the better run-and-gun games of all time. Then it adds its own flavor to the mix with a close-quarters melee swipe and tiny buddy robots—similar to "Options" in games like Gradius and Thunder Cross—that either grant you a speed boost, give you shields, or provide a second source of offensive firepower. 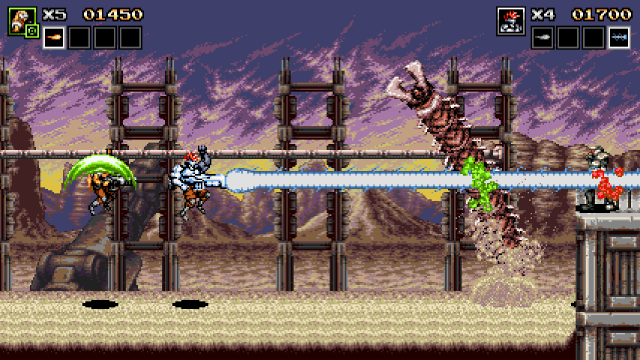 Despite some homegrown inventions, Blazing Chrome remains true to the Contra blueprint. That means, in addition to addictive arcade action, a relatively short adventure with a high death count. The game has only five levels—six if you want to count the mini boss rush at the end—that players could, in theory, finish in a single sitting. The steep level of difficulty extends the proceedings, as you'll be dying and restarting again and again, but that introduces its own set of frustrations. In other words, if you're craving a more substantial action-adventure title with a gradual learning curve, this is a bad match.

Fortunately, developer JoyMasher—creator of retro-themed action games Oniken and Odallus—has added some concessions and features that make the game more accessible and add to its replay value. First, there are three difficulty levels: easy, normal, and hardcore. Easy and normal come with unlimited credits and, graciously, a save system that allows players to retain progress after completing an individual mission. If you beat the game on normal mode, you'll unlock hardcore (three lives, three credits, and no saves) plus boss rush mode, mirror mode, and two playable characters, Raijin and Suhaila, who have unique movesets that are more Strider or Ninja Gaiden than Contra. The game also supports high score leaderboards. So, while you'll be perishing and revisiting the same spaces often, you'll at least find ways to reach the end of the game and discover reasons to return once you see the credits roll. 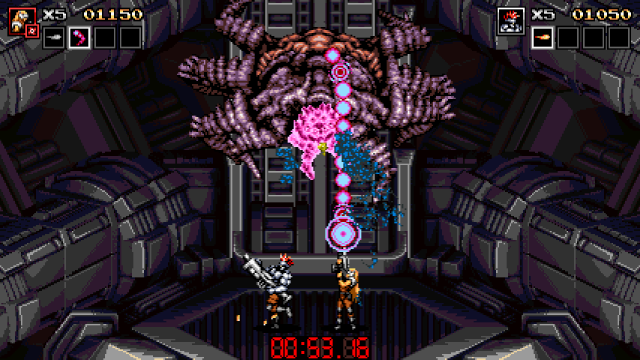 Just as Blazing Chrome fits the bill mechanically, it delivers a spectacular pixel world worthy of the 16-bit era. The animated, scrolling backgrounds are detailed and deep, character and enemy models are defined and articulated, and special effects like explosions and gushing blood are glorious in their violence. There are also lots of small flourishes—like the way Doyle's mechanical body disassembles upon death or when Mavra blows a chewing gum bubble after successfully finishing a level—that show that JoyMasher and pixel artist Danilo Dias paid attention to the smallest details.

Music and sound design are also successful. The game's soundtrack won't make you forget the otherworldly, moody tracks from Contra III or the industrial metal beats from Hard Corps, but it's a nice complement to the high-octane action onscreen. "Snow Base", with its chilly notes and driving electronic melody, is a high mark. 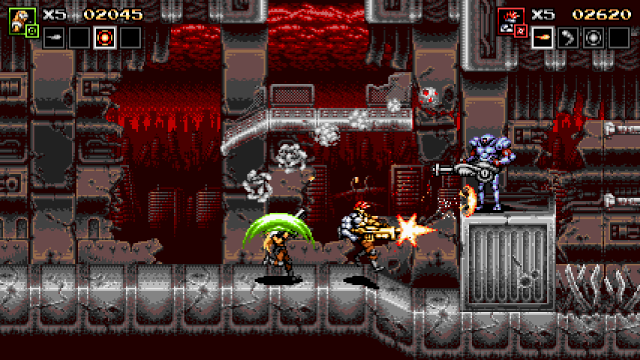 It might not bear the Contra trademark, but Blazing Chrome is a worthy successor to the long-running action series. In fact, it's just as good—if not better—than the greats that came before. It's brief and sometimes punishing, but it delivers technically-sound, mechanically-diverse side-scrolling action, plus unlockable modes and characters, two-player local co-op, and some delightful 16-bit art and sound. If you adore Contra, you will absolutely love this game.

This review is based on a digital copy of Blazing Chrome for the NS, provided by the publisher.

Blazing Chrome exists because Konami would rather make pachinko machines than make a proper modern Contra.

@Boffbrauer2 hits lever that drops you into pit of crocodiles