Freedom Planet was originally conceived as a Sonic the Hedgehog fan game. It was to feature Sonic's trademark rings and Dr. Robotnik as the villain, but partway into development designer Stephen DiDuro had a change of heart. He redeployed his resources into a brand new intellectual property. The result was Freedom Planet, a 2D platformer that debuted on PC last year and Wii U this month. Sonic and platform fans - this game is for you.

Freedom Planet begins by introducing best friends Lilac and Carol, who are drawn into a planet-wide conflict when an alien warlord crash lands on their world. Aided by a mysterious stranger, the duo attempt to stop the warlord and reclaim a powerful relic called the Kingdom Stone. The story, played out in entertaining 16-bit cut scenes, is surprisingly good, if a little cliche. The voice acting, however, is a mixed bag; some of it comes off as amateurish. 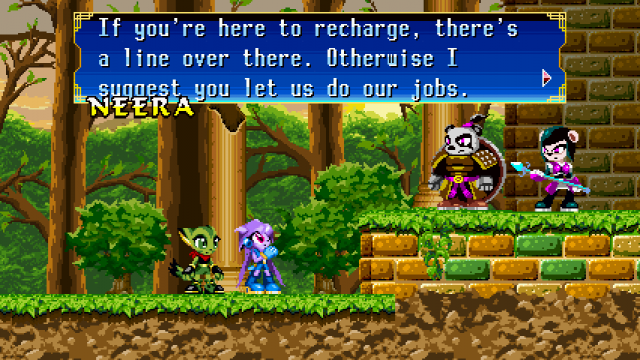 Freedom Planet plays like a love letter to Sega's fourth-generation platformers. It honors and channels the creative energy of games like Rocket Knight Adventures, Ristar, and, of course, Sonic the Hedgehog. It's a platformer oriented around speed, momentum, multiple playable characters, and lengthy levels with plenty of branching paths. For anyone waiting for a worthy successor to Sonic 3 & Knuckles, the wait is over.

That said, Freedom Planet isn't a simple reskin of Sonic the Hedgehog. It has an identity and rhythm all its own. While it embraces Sonic's sense of speed, it takes a more deliberate approach to platforming. In some levels, players must do some exploration to track down a switch or a key card in order to progress. DiDuro and his team at GalaxyTrail did a fine job reaching a balance between the precision of traditional platforming and the kinetic rush of Sonic's hops, skips, and jumps. 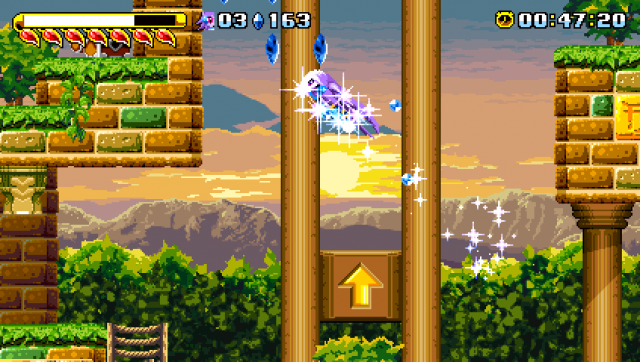 Also unique to DiDuro's brainchild are lengthy, sometimes labyrinthine levels. For any potential players expecting quick, bite-sized levels, think again. It's not uncommon to spend 10-20 minutes in each of Freedom Planet's 14 levels, racing back and forth, fighting enemies, and tracking down extra lives and bonus items. In addition, each level features a mini boss and main boss, both of which will take some time to topple.

Speaking of bosses, for the most part they're challenging but fair in Freedom Planet. But in its closing chapters, the game suffers from a nasty difficulty spike that will frustrate even the most hardened platform veterans. The final boss fight is especially daunting. You will die. A lot. 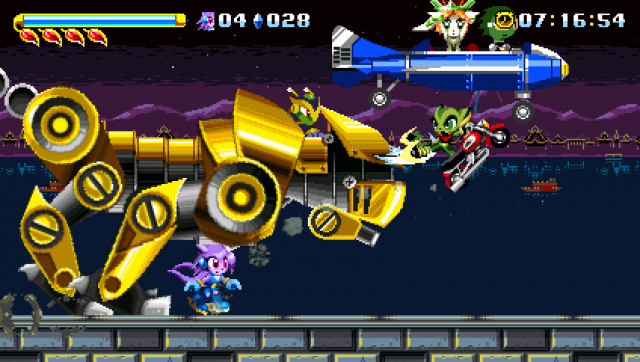 Perhaps the most impressive thing about Freedom Planet is its diversity and replay value. Each level has unique enemies, hazards, and gimmicks. Relic Maze, for example, plays almost like a "Metroidvania" stage. Sky Battalion is completely non-linear, allowing players to attack three enemy airships in any order. And Battle Glacier features a horizontal scrolling shooter segment.

Freedom Planet also supports several game modes that can be played with up to three different characters, all with unique move sets. Plus there are hidden cards scattered around each level that unlock songs and sound files, and plenty of achievements. There's no shortage of things to do in Freedom Planet. 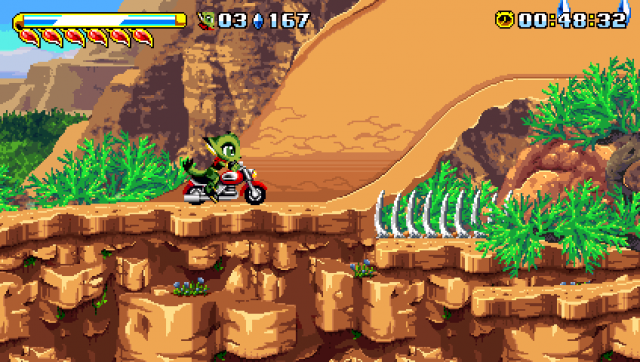 Apart from some inconsistent voice acting and a late-game difficulty spike, Freedom Planet is a tremendous game. It manages to capture the speed and intensity of Sonic's 16-bit adventures but tempers that speed with solid platforming mechanics and a focus on exploration. Its levels are long, diverse, and packed with hidden items. And, with several playable characters and a long list of achievements, there are plenty of reasons to return to the game once the main story is complete.

Although Freedom Planet does not officially bear the name Sonic the Hedgehog, it deserves to be mentioned in the same breath as the greats of the series. It's the best Sonic game (that's not really a Sonic game) of the last 20 years.

This review is based on a digital copy of Freedom Planet for the WiiU, provided by the publisher.

This is a great Sonic clon, in fact I think it does the formula better than Sonic, not that charming though. The story is pretty lame, but who cares? it´s a fun game.

I completely forgot to check when this launches. Got to pick it up asap

It's a very fun game, I kickstarted the PC version and I think I will buy it again on Wii U as, like they say in this review, it's really the best Sonic game in decades by a country mile.

I tried the demo back during E3. It was pretty good. I'm looking forward to adding this to the collection.

Recently picked this up. Great game!

I think people need to play Rayman Origins/Legends and pretend Rayman is Sonic. THAT'S a good Sonic game. The problem with 2D Sonic is it's too damn fast. If they notched it back s bit, you'd have Rayman. *HINT HINT SEG- Oh who am I kidding, they don't want to sell games anymore.

No, Rayman is not Sonic, they both are 2d platformares, that´s it.