Xeno Crisis is an upcoming twin-stick shooter that plays heavily on nostalgia for the early ‘90s, but which includes modernising features, such as procedural map generation and randomised gameplay elements. At the time of writing the project has been backed on Kickstarter to the tune of £72,500, which is more than triple developer Bitmap Bureau's original goal of £20,000.

I managed to sit down and have a chat with Mike Tucker, design director at Bitmap Bureau. We talked about the inspiration behind the game, the Kickstarter campaign, developing for retro platforms (including the nifty physical cartridges and boxes, featuring art from Derrick Chew and Genzoman), and more. 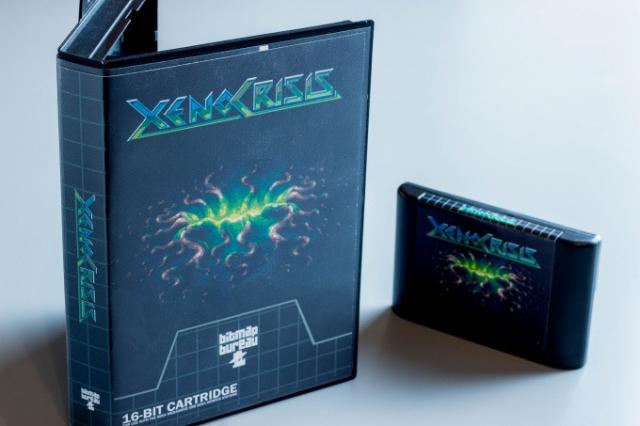 Q: The game looks very similar to Smash TV, is that where your inspiration came from?

Mike Tucker: We certainly used Smash TV as a template, as after we had decided to go down the route of making a full, commercially released Mega Drive game, we considered what style of game would work well on the system, but also hadn’t been done to death already, or not done terribly well. We felt that we could add elements to Smash TV and that the Mega Drive port was something we could improve on. It’s technically not too demanding either, so it’s a good place to start. We also looked at Shock Troopers, Mercs, Outzone, The Chaos Engine, Alien Syndrome, Skeleton Krew, Zombies Ate My Neighbors, Ki Ki Kai Kai and many others.

Q: Chaos Engine had six characters, why did you stick with just two?

Mike Tucker: That’s mostly down to the Mega Drive cartridge size and production costs really; we’re using a 4 Mega Byte cartridge, and each player sprite takes up a large chunk of space as they consist of 137 frames - the idle, walk, shoot, and roll anims each have to be animated in 8 directions. On top of that each player has a portrait, cutscene imagery and also some speech. So adding even one more player would have meant having to drop something else! We also felt that two is a good amount - they play pretty much the same, with the female marine being a bit quicker and the male marine starting with a higher ammo capacity.

Q: Why do you have any differences between the characters?

MT: Just to cater for different play styles, but it can be balanced out in the shop at the end of the first area. 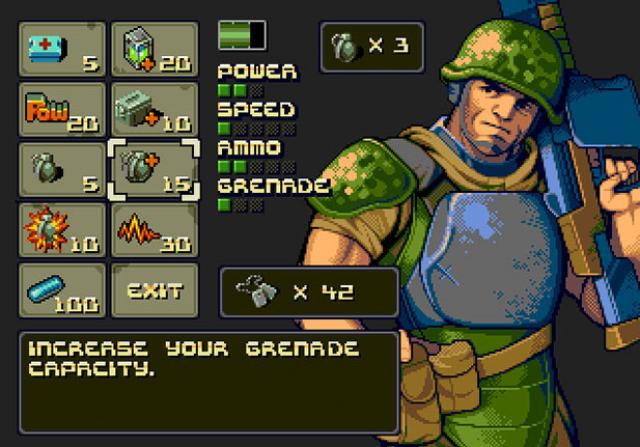 Q: What was the highlight of the Kickstarter campaign for you?

MT: Getting funded in 40 hours - we asked for £20K, so achieving that goal was big for us, and the feedback from people, particularly those in the retro community, was extremely encouraging. People got very excited that we were making a new Mega Drive game!

Q: Do you think that you’re hitting purely on nostalgia or is the game likely to appeal to a wider audience?

MT: We want the retro crowd on board, no doubt, as that’s becoming a big market - some companies are even making new peripherals for retro consoles now. But at the same time, we feel it’s a strong enough game to stand alone on modern platforms (i.e. Switch, PS4, Xbox One, PC, Mac and Linux).

Q: What's been the worst part of the development process?

MT: Well we are a small team, and our most crucial member, Matt, smashed his head open on a cupboard door in the office over the summer. He’s doing the programming for Mega Drive, Dreamcast and Neo Geo, so without him we are a bit screwed! The accident put us back a few months, which is really unfortunate, but everyone’s been very understanding about it. Other than that, producing some of the physical aspects has been tricky, but we have everything in hand now.

Q: Why did you choose the two Sega systems, and also the Neo Geo?

MT: The Mega Drive was the first console I owned, so I’ve always had an attachment to it. Before that I had a PC but I played a lot of arcade games too - the Mega Drive was like bringing the arcade to your home. To this day it’s probably still my favourite console - it has some great games on it and has a distinct personality. If you look at a screenshot of a Mega Drive game, you know it’s a Mega Drive title straight away just from the colour palette alone, and the sound chip is even more distinct.

I’d say that all of those consoles from that era - the SNES, Mega Drive, PC Engine and Neo Geo all had their own characteristics which set them apart, with the Mega Drive in particular being very gritty and raw. Given the aesthetics of the machine, it felt appropriate to produce an alien-themed game. We wanted to make a game that was pure Mega Drive from the get-go - we’re really aiming to make the perfect Mega Drive game, whether people agree we’ll have to see!

As for the Neo Geo, it’s similar in many ways - it shares the same CPU (albeit slightly beefed up), and the same screen resolution, so much of the code and art can be re-used. So it made a lot of sense to us to bring Xeno Crisis to the Neo Geo with a few enhancements added.

Q: The game only offers easy and hard difficulties - why no medium setting?

MT: I think it’s really down to testing purposes; another difficulty mode adds another round of testing, and on the retro platforms it has a bit of a knock-on in terms of performance, particularly if enemies have different behaviours on each difficulty setting. I think two is enough though - we really want players to play on ‘hard’ (the default setting), but the ‘easy’ mode is there for people who might struggle with it.

Q: Design-wise, it looks like you’ve taken influence from Aliens, Dune, and more. Why is that?

MT:  We wanted to reference a few games and films from the ‘90s, to help make it feel like a genuine game from that era. We have a bit of a storyline but it’s not something you saw a lot on Mega Drive games, particularly on the arcade-style titles, and we want people who remember the Mega Drive to feel at home. There might be things here or there that you might recognise from Contra, Aliens, Predator, Doom, Smash TV, etc. - little nods to make it look, sound and feel more like a ‘90s game.

Q: So what’s the actual story and where’d the idea come from?

MT: There’s a research colony, kind of like a giant space station with 7 areas. The research has got out of hand and something has gone disastrously wrong, so the colony sends out a distress signal, then you and your fellow marines go in to investigate. It’s all very cliched, but deliberately so - it’s really just an excuse to go and shoot aliens basically.

But the story develops, and there’s a twist or two. If you’re familiar with Ghouls and Ghosts then that might give you a hint, not that we would put you through that same ordeal!

Q: Is there anything you’d have changed if circumstances allowed?

MT: There’s always something; with it being a Mega Drive game it’s only 4MB, so there are things we would like to have added but just didn’t have the room for. More characters would have been cool - we looked at adding a robot character similar to Scooter from Alien Storm. Individual cutscenes would have been nice too. There were a few enemy types that didn’t make the cut as well, but it’s good to hold some things back in case you get the opportunity to make a sequel one day. Overall though we’re really happy with the game, and we hope that everyone enjoys it when they finally get their hands on it! 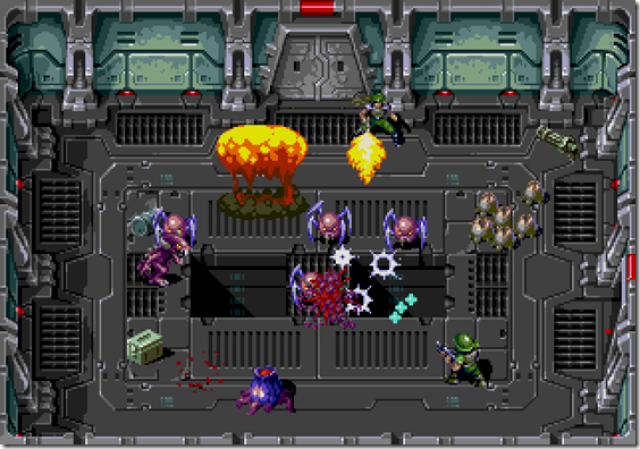 If you’re interested in Xeno Crisis you can pre-order the game directly from Bitmap Bureau. It's coming to Sega Mega Drive/Genesis, Dreamcast, Neo Geo, PS4, Nintendo Switch, and Xbox One. Be sure to check out the company's other games too - 88 Heroes and Ninja Showdown.