In 2014, Terrible Posture Games - a development team of two brothers - released its premiere effort in Tower of Guns, which slapped together rogue-lite and bullet-hell elements to create a unique and extremely fast paced, old-school first-person shooter. Now it’s 2018 and Terrible Posture Games, this time supported by publisher Grip Digital, has unleashed a follow up in the form of MOTHERGUNSHIP, which takes the best parts of Tower of Guns and ramps up the chaos along with the ambition. The result is a thrilling and unpredictable rollercoaster of a shooter with all its highs and lows. 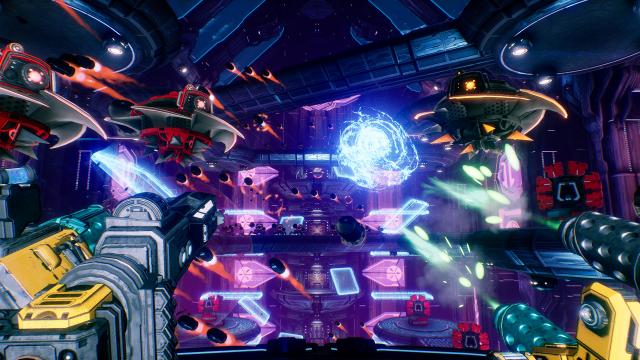 MOTHERGUNSHIP’s story is straightforward but delivered in an often hilarious and self-deprecating way. Earth has been invaded by a robotic alien species, and to save it you must battle your way across an armada of alien spaceships before facing the MOTHERGUNSHIP itself. You’ll be supported by a ragtag crew which sometimes gives you good advice, but usually just crack jokes at your expense. Indeed, Terrible Posture Games does well to recognize the cliche-ridden story and exploits the silliness of it through witty and smart writing.

Dialogue is also delivered through strong voice acting that fits the overall comical tone. There's something about the Colonel admonishing your failures with a biting quip that makes dying feel even more crushing. Sound effects are also well incorporated, making the different weapon types sound both unique and powerful. The music is just as poignant, with killer metal tunes accompanying you as you blast countless robotic aliens away across different ships. 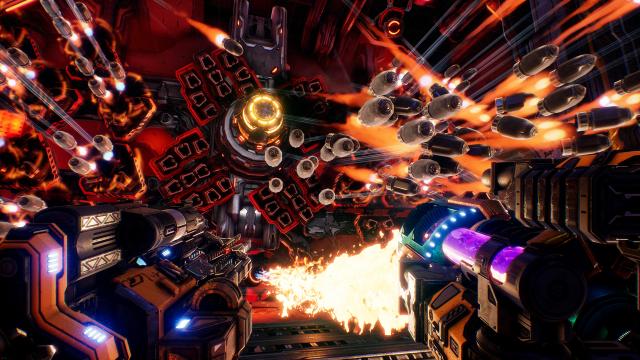 Graphically, MOTHERGUNSHIP maintains the same consistency found in the sound design. Everything is bright, colourful, and clean, which helps the levels pop and come alive. This isn't the drab and dark alien invasion setting found in other games, which is refreshing. Rather, the art direction reiterates the fun and upbeat tone Terrible Posture Games was going for. However, the graphics do become a bit repetitive if you look closely. Rooms might look the same after a while, for example. Most of the time, though, you’ll be far too busy shooting and rushing through the rooms to even notice.

MOTHERGUNSHIP plays like many other rogue-lites except in the form of classic first person shooters like Unreal Tournament. Your job is to push an alien ship’s self-destruct button (conveniently found at the end of every ship). Complete a mission and all the weapon parts you bought at stores during a mission are yours to add to your arsenal, along with any other rewards, such as coins to buy more weapon parts. In your way are randomized rooms filled with different types of robotic aliens. Some are agile fliers that shoot lasers at you. Others can be larger stationary turrets that fire an assortment of missiles. Some ships even have massive bosses you have to take out before reaching your goal.

Rooms can contain hazards themselves, such as spikes and lava pits, and there are also special rooms such as challenge rooms which give you a specific task to achieve in exchange for a reward. Each room is connected by a hallway where you can check your stats like bullets fired and enemies killed while the next room is being randomly generated. 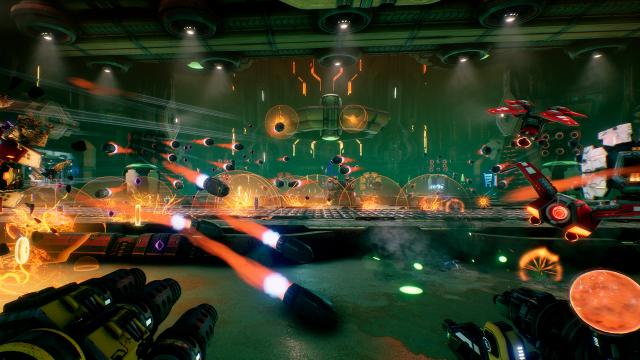 Due to the many random variables, MOTHERGUNSHIP is consistently exciting, but can also be frustrating. Getting to the self-destruct button with low health can be extremely gratifying. However, like many other rogue-lites, this is at times detrimental. Some rooms are laughably easy while others may be seemingly insurmountable, to the point of being unfair. When you die - and you will, often - you lose all the weapon parts you took with you, along with the ones you may have bought at stores during a run. This makes dying a constant source of frustration because dying too many times means running low on more powerful weapons.

Wisely, Terrible Posture Games included some RPG elements to give you a sense of progression and help alleviate some of the frustration of dying too often. At the end of every run you gain experience points to level up. For each level, you can add a point to specific permanent boosts in your armoury to help you out. Boosts include extra health, a faster energy recharge rate, and extra consecutive jumps. Each ship you run through is also given a difficulty level, allowing you to see the level of enemies you will encounter.

To help you get through all of the random challenges you're equipped with an armoured suit. The suit starts with the ability to triple jump, but you can add more jumps during any particular run. The suit is also extremely agile, allowing you to move quickly and dodge the endless stream of bullets likely to come your way. You’ll need to use the suit’s maneuverability to be successful. Indeed, sometimes the wisest decision is to head to the next room without killing everything. This makes the gameplay exhilarating as it forces you to constantly be on the move and make quick decisions to overcome the unpredictable challenges found in each room. 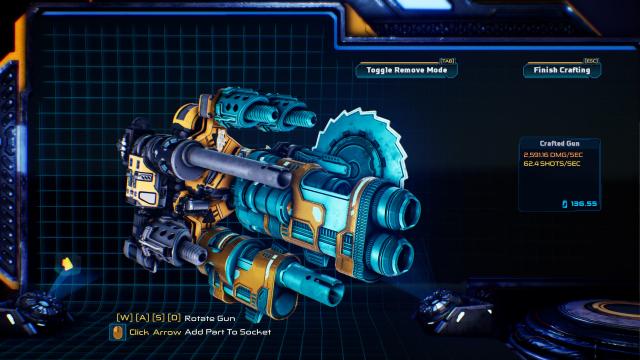 There's a lot of replayability here too. During the campaign, you'll unlock an Endless mode that tracks how many randomly generated rooms you were able to overcome before dying. Beat the campaign and you unlock Sandbox mode, which is identical to Endless mode but allows you to craft any weapon you like from all of the gun parts in your arsenal. Finally, you can choose to collect legendary gunparts in MOTHERGUNSHIP's dungeon mode, where the stakes are higher as the punishment for failing is a complete restart.

MOTHERGUNSHIP’s most widely touted feature is having one of the largest customizable arsenal of guns in all of gaming. With this claim you would think crafting guns is a complicated process, but the opposite is true. At the start of every level, and in every shop, you’ll find crafting stations. Here, you can build guns very easily because there are only three categories: connectors, barrels, and caps. The only rules are that the parts can’t block one another and the barrel has to face forward.

Crafting guns is intuitive and simple, but allows for a high degree of customization. You can create more traditional types of guns or let your imagination soar (so long as you have the parts) by creating things like a rocket launcher augmented by a flamethrower. You do have to be careful, though, as creating guns that are too powerful will drain energy very quickly and if not properly managed can work against you. 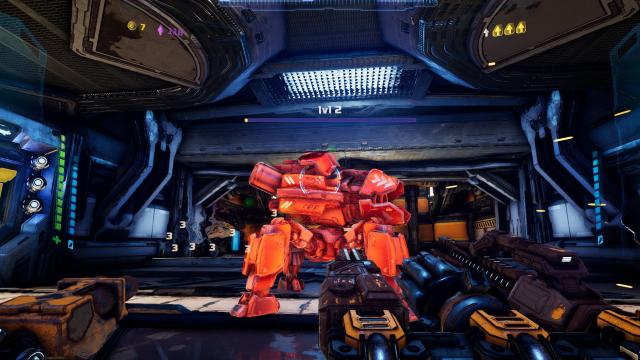 Even though the most ambitious guns are relatively easy to craft, there are some caveats here. In any given mission you can only bring a certain amount of gun parts with you. The rest you must buy during the mission itself. Often, I found that I had enough to craft two relatively basic guns at the start of a mission and would be forced to add to them as I went through a ship. That’s fine by itself, but because of the random nature of the game there was no guarantee I would find a store, have enough money, and that the store would have the parts I wanted. Terrible Posture Games tries to solve this by including the aforementioned Endless mode, which is unlocked early on in the game, but it would be more fun if you were given more opportunities to craft the guns you actually want to use in the campaign as well.

Overall, if you can stand the random nature of the game and the frustration of dying often, you’ll find there’s a lot to like in Terrible Posture Games’ latest title. There really aren't many other shooters out there that offer this sort of blend of comedy, speed, chaos, and gun customization.

This review is based on a digital copy of MOTHERGUNSHIP for the PC, provided by the publisher.

I could see myself enjoying this one. 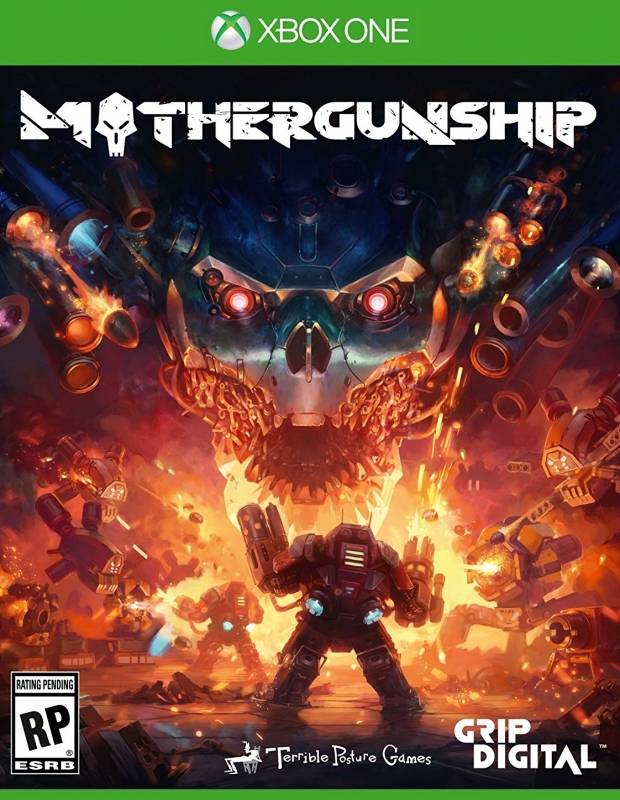