When I first heard about Seeking Dawn a year ago I was optimistic. It promised a gorgeous alien shooter with a blend of survival, crafting, and exploration mechanics, all in virtual reality. Now that it's released it's clear that although Seeking Dawn is a beautiful virtual reality title, the various gameplay mechanics rarely come together in a cohesive and meaningful manner, leaving players who are hungry for a true AAA virtual reality shooter dissatisfied.

I must say that Seeking Dawn's early experience is wonderful. After a brief tutorial, players are thrust into action and quickly find themselves stranded on an alien planet. Thanks to the terrific visuals and attention to detail, developer Metaverse succeeds at transporting players to another world, at least initially. The planet is vibrant and full of alien life-forms, from small bugs to giant floating jellyfish to humongous sauropod creatures. Flora is equally interesting and diverse, many of which react based on the proximity of the player. All in all, Seeking Dawn's graphics are top notch and this makes for one of VRs prettiest games. 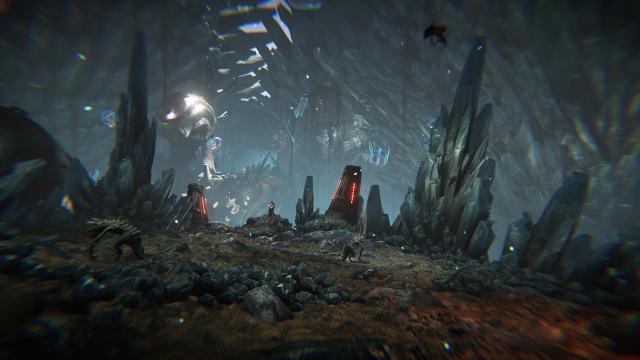 Unfortunately, the same level of polish found in the graphics is not present in the audio design. Ambient noises for the most part do their job, but character voices are inconsistent and range from mediocre to decent.  One of the more annoying issues I noticed was how your character will incessantly complain about being hungry or thirsty when those levels get below a certain threshold. To compound these sound design problems, weapons sound underpowered and unsatisfying to fire. As a result the sound design generally detracts from the overall experience.

Another area that could use more work is the story and the delivery of it. Most of it is pretty standard sci-fi fare that is told better elsewhere. You play as FCR operative James Weston, who is sent on a mission to find his missing allies. Ultimately, the survival of the FCR and their fate against the dominant ACC are in your hands. But really the story is little more than a flimsy excuse to place you in a hostile alien environment where you're forced to craft weapons and defences, survive the hostile environment, and shoot a variety of enemies, both creatures and the ACC. 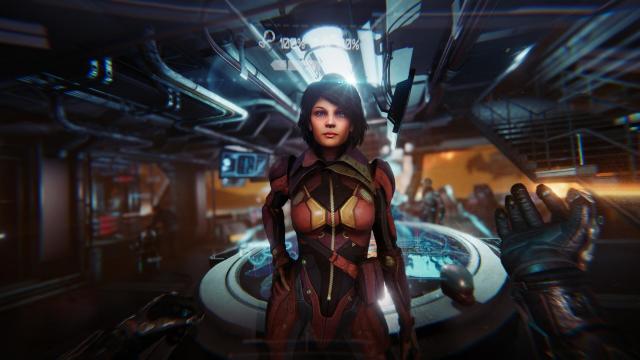 Of course, the main draw of Seeking Dawn is the gameplay mechanics and the ability to interact with the world in virtual reality while taking on different challenges. In this regard, the game does some parts well while others tend to fall flat. VR implementation is solid, with a variety of comfort and movement options to suit your preferences. One thing I particularly thought was clever was the running mechanic. To run, you swing your controllers alternatively up and down as if you were actually running. This felt tacky initially, but it quickly became natural.

Another strong VR addition is the use of menus and the inventory system. To equip an item or weapon, you just need to pull up the inventory, point with your controller, and click and drag it to the proper slot. This works really well and ensures you don’t need to spend too much time managing your inventory. Another great addition is the quick select slots where you can place a variety of items and weapons for quick swapping.

Speaking of weapons, combat in Seeking Dawn is handled well enough, but does little to differentiate itself from other VR shooters. You basically point and pull the trigger to shoot. Reloading is done either automatically or with the press of the grip buttons. In some other VR shooters reloading is done more realistically, requiring you to press a button to release the clip and then physically mimicking the motion of grabbing a clip, shoving it into the chamber, and cocking it. Details like these are what sets VR apart from traditional shooters, but unfortunately Multiverse chose not to utilize them here. 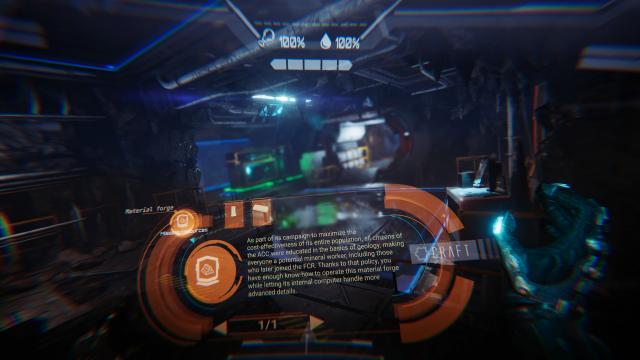 Multiverse did, however, borrow from other games in certain areas, but nothing really stands out. For example, survival plays a part of Seeking Dawn. You have a hunger and thirst level that will steadily decrease over time. To replenish them you need to eat and drink from various food sources. You will also be required to craft food to stock up in order to survive. Due to the relative ease of finding food sources and the amount of inventory space you have, I found the survival elements to be more of a chore than a challenge. Indeed, I often forgot I even needed to eat or drink until I was reminded by James Weston.

The crafting elements not only relate to survival, but to your arsenal as well. You will be required to craft more powerful weapons as you progress, or you will quickly find yourself outgunned. This causes Seeking Dawn to have some frustrating difficulty spikes. At times, the weapons you have are simply not sufficient enough to overcome some encounters or bosses. This forces you to return to your base to craft more powerful weapons. However, often you’ll find yourself having to farm for rare ingredients before you can even craft these weapons. If you don’t remember where certain ingredients come from, you have no choice but to take out random enemies, mine rocks, and harvest trees in the hopes that the ingredients you need appear.

Difficulty spikes aside, enemies are generally mundane and basic. Some encounters are more exciting than others, but there just needs to be more. Multiverse did try to alleviate these issues by forcing you to defend your base against waves of enemies at times, but even this becomes tedious. What don’t become tedious are the boss fights. Often these are exciting encounters, requiring you to plan ahead and come up with strategies in order to be successful. Unfortunately, there aren’t that many throughout the campaign. 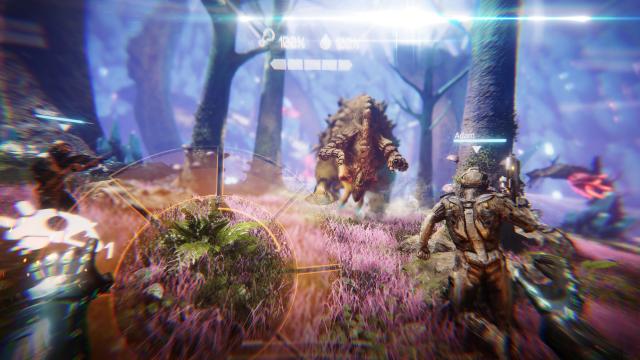 If you ever do find a particular boss battle (or any other part of the campaign) difficult, then you can go online and play cooperatively with up to three others. Hosting a game will allow others to join you wherever you are in the campaign. There’s some fun to be had in multiplayer and it works well enough, but players should be aware that the population is not that high.

Overall, it's difficult to recommend Seeking Dawn. On the one hand, Multiverse has created a beautiful world that is quite easy to get lost in. On the other hand, the multitude of gameplay mechanics rarely add up to something enjoyable.