Shining Resonance Refrain is a professional remaster of a decent, mostly-enjoyable Japanese action-RPG. Nothing it does is exceptional, but almost everything it does is satisfactory. Its story and characters are engaging, its world and mythology interesting, its combat system rewarding, and its weapon customization and relationship building options substantial. It's not as great as Xenoblade, or the best offerings from the Ys or Tales series, but that is less a commentary on the drawbacks of Resonance Refrain and more a testament to the brilliance of those other franchises. In short, Resonance Refrain is an above-average RPG that nonetheless sits in the shadow of the genre's best.

Set in the kingdom of Astoria, Resonance Refrain follows Yuma Ilvern, a young man burdened with the soul of an ancient, powerful drake called the Shining Dragon. After he's rescued from prison by knights of Astoria, Yuma finds himself caught in a decade-long war between his rescuers and the invading Lombardian Empire. 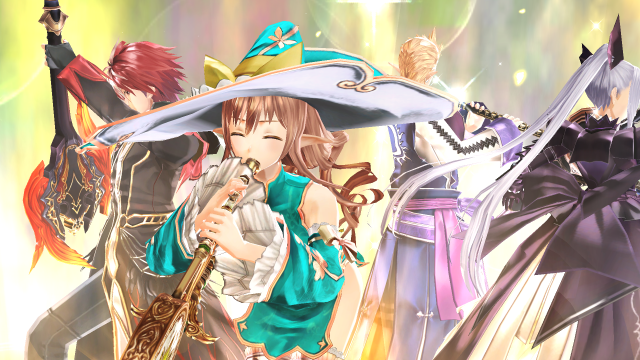 The story and mythology in Resonance Refrain aren't groundbreaking, but they're interesting and dynamic enough to hold your attention. Legend tells of an ancient time when dragons communed with humans and elves. When a divine force called Deus sought to destroy the world and build upon its embers a new one, dragons and elves split into two sides and fought to the death. Centuries later, a small group of Dragoneers — warriors chosen by weapon-instruments called Armonics, crafted from the very body of the Shining Dragon — stumble upon Yuma, a vessel for the soul of the Dragon, who may hold the key to ending the current war with Lombardia and bringing closure to the ancient conflict with Deus, locked away hundreds of years ago.

The scenario writers at Sega bring depth and texture to this heroic tale with a handful of intriguing, if long-winded, characters. Yuma, as a proxy for the player, is a bit of a blank canvas, but his friends and enemies are, for the most part, nuanced, complicated people. The stand-outs are Kirika, a "Diva Magica" who stands in awe of the Shining Dragon but ignores Yuma's individuality; Beatrice, an old friend of Kirika who, as a dark elf, is subject to discrimination; and Excella, princess of the Empire and primary antagonist of the game, who wages a destructive war while maintaining her honor and humanity. 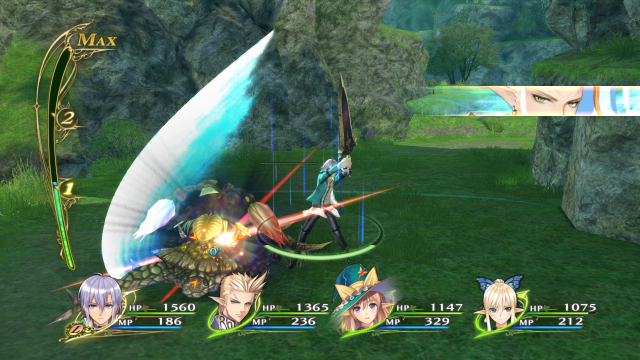 As these characters grow and the story marches forward, players will find themselves in a tidy gameplay loop: accept main missions and side quests, explore the world and fight monsters in the field, reach an "event" marker and trigger a boss battle, then return to Astoria's seaside capital Marga to start the whole thing over again. For the majority of the game, this formula works. In the final two chapters, as the story spins its wheels, the difficulty spikes, and the necessity to grind becomes apparent, things begin to unravel slightly.

Sustaining this loop is a simple but effective battle system. As your party comes into physical contact with a monster in the field, it enters into a real-time action encounter. There the party leader can issue basic orders to three other teammates, and perform several offensive and defensive moves. Aside from normal attacks and "break" attacks, which break enemy defenses, there are force abilities, a dodge, and a block move. Normal and break attacks use Action Points (AP), which gradually refill over time, while force abilities are powerful magic attacks that use Magic Points (MP). Importantly, using force abilities recovers AP, so players can maintain the offensive by rotating among normal, break, and force maneuvers. 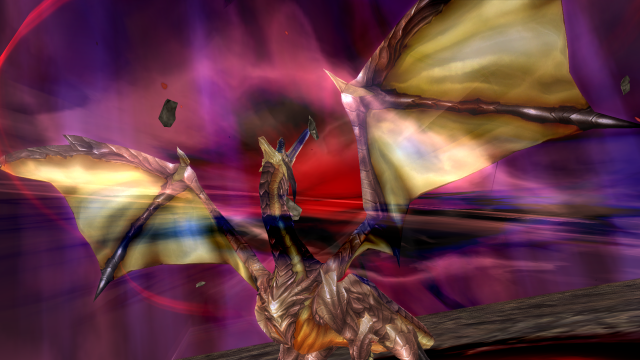 The result is a clean, approachable combat system. What makes it particularly special are two things: dragonshift, a move specific to Yuma, and B.A.N.D. sessions, which riff on the game's musical theme. Using dragonshift, Yuma can transform into the Shining Dragon to deal devastating damage to monsters; it can change the tide of any battle, but its power is dependent on Yuma's MP pool. B.A.N.D. sessions involve the party performing ancient rune songs with their Armonics (part weapon, part musical instrument) to grant special buffs. The song's effect changes based on which character is leading the performance.

All this begins to break down, however, as the game becomes more punishing. Late-game difficult spikes — two or three boss battles in quick succession or enemies with HP gauges that would make Monster Hunter and Destiny blush — expose friendly AI as inferior and the rudimentary party command system as insufficient, and present one of two equally unfavorable options: grind for hours to simply overpower your enemy, or employ a trifecta of dragonshift, B.A.N.D., and dozens of health and ether potions to outlast it.

Aggravating the situation are a few missing quality-of-life features. Save points and camp sites are few and far between; there's no way to warp to landmarks around the vast Astorian kingdom (a purchasable item called a "Marga stone," which teleports the party back to the capital, eventually becomes available, thankfully); players can swap characters in the heat of battle only by entering the pause menu; and unequipped characters gain zero experience points — which becomes a nuisance when the game splits the party up in the final hours. 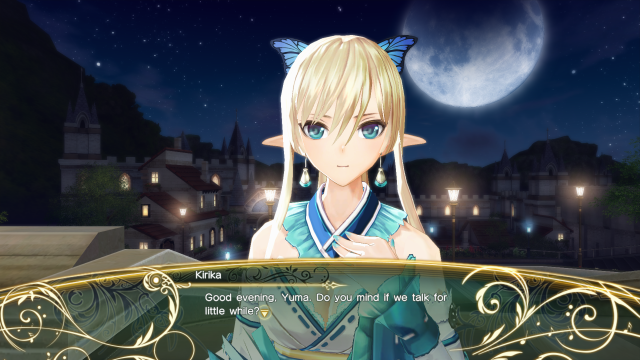 While combat can be a mixed bag, particularly towards the end of the game, almost everything else in Refrain is satisfactory, if derivative. The capital Marga is home to dozens of NPCs and quest-givers, who break up the routine of story-based missions. There are also alchemists who create Aspect Pieces (perks that go inside slots in each Armonic) and tuners who modify armonics to produce different effects. For example, if Rinna uses "Witch Whisper” with her Trumrod, her max MP is increased; if she opts for "Sage Teaching," she deals more damage when hitting an enemy's weakness. Weapon customization options are substantial in Refrain.

So too are relationship-building and bonding options. Yuma, as the main character, can develop friendships and eventually romantic relationships with any of the male and female party members in the game. He can "invite" comrades to chat alone during campfire sequences, and go on dates back in Marga. Go on enough dates with someone and you'll be able to trigger a special after-credits romance scene.

The more you interact with teammates, the more "traits" you'll unlock. Titles that represent the characteristics of each hero, traits are assigned in the "bond diagram," where they affect allies' behavior in battle. For instance, Agnum's "Big Brother" trait and Yuma's "Dragon Soul" trait form the bond "Let's Go, Bro!" It's easy to lose hours fiddling with aspects, tunings, and bonds, in order to find the combination that works best with your playstyle. 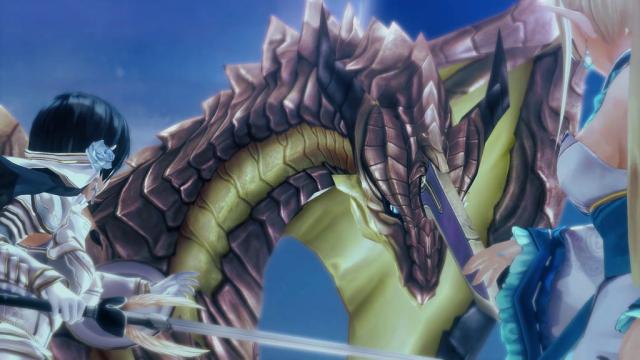 Refrain, which is a remaster of the PS3 game Shining Resonance, a Japanese exclusive, looks better and brighter than ever. Everything comes off as clean and colorful, even if some last-gen geometry and textures betray the game's origins (don't look too closely at the flowers in Marga; they're a pixelated mess). Character designs by renowned artist Tony Taka are extraordinary, and Astoria's varied biomes are believably dusty, foggy, verdant, and sun-baked, even as they lack the verticality of something like Ys VIII. The soundtrack is good, but unremarkable — surprising, considering the title's focus on music and resonance.

Along with improved graphics, Refrain includes all the DLC released for the PS3 original, plus a brand-new "Refrain" mode, which unlocks two fan-favorite playable characters. Note that Sega urges new players to choose "Refrain" as a second playthrough, as the new characters and scenarios will spoil some plot points. Finally, the game includes both English and Japanese voiceovers.

With so many brilliant action-RPGs on the market, it's difficult to prioritize Shining Resonance Refrain, which is only decent by comparison. Still, with a roster of captivating characters, an entertaining battle system, and a deep set of weapon and party customization options, the game is worthy of your attention in the downtime between higher-profile releases. Clocking in between 30 and 45 hours, and featuring an attractive "Refrain" mode for double-dippers, it's a strong value proposition, particularly for those seeking out something to scratch the Ys or Tales itch.

This review is based on a digital copy of Shining Resonance Refrain for the NS, provided by the publisher.

This is the second review I've read that mentioned both the late game difficulty and the lack of good A.I. Thanks for the review! Was on the fence with this one, but I think I'll pass. 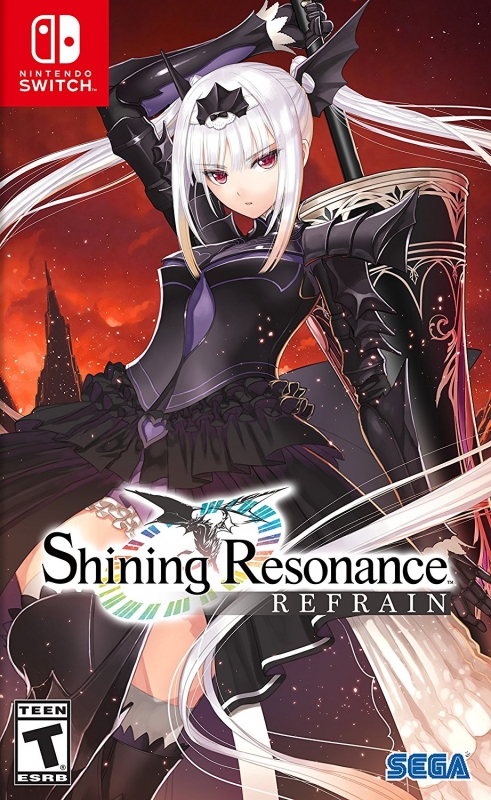 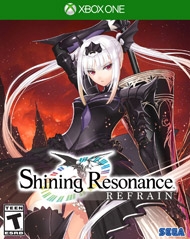 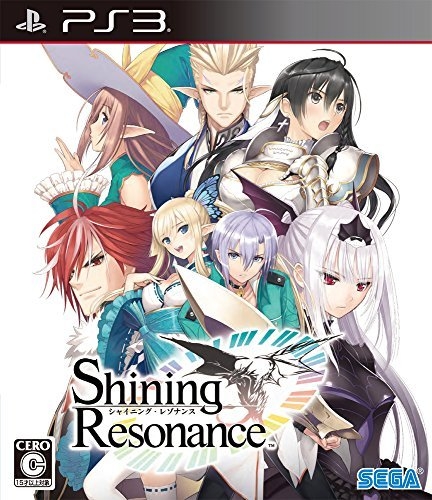