Although it's missing series stalwart Nathan Drake, Uncharted: The Lost Legacy is very much like its predecessor Uncharted 4. That's both good and bad. It's good because that means state-of-the-art graphics; best-in-class storytelling; and, on occasion, spectacularly-staged action set-pieces. It's bad because that means unengaging, idiot-proof platforming; chapters that vary wildly in quality; and large sections of the game where players are passive onlookers instead of active agents. In a way, The Lost Legacy is a collection of greatest hits — and greatest misses — from the Uncharted franchise.

The Lost Legacy stars two characters familiar to the Uncharted faithful: Chloe Frazer and Nadine Ross. Chloe, formerly a partner-in crime to Nathan Drake, and Nadine, one of the villains from Uncharted 4, make the leap from supporting cast to headline stars fluidly and believably. Like all modern Naughty Dog games, this one has well-rounded and complex characters, made all the more nuanced by Claudia Black and Laura Bailey, who lend their voices to Chloe and Nadine, respectively. 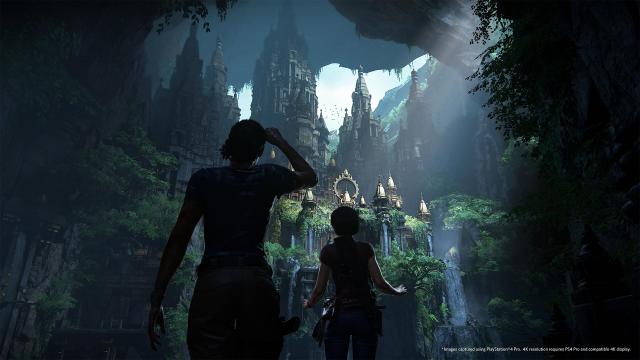 On the hunt for a long-lost relic, the tusk of Ganesh, the two treasure-hunters find themselves in India, exploring an ancient civilization. On their trail is a local warlord, who covets the tusk and aspires for political power. This is well-worn territory for Uncharted, with very few surprises along the way for veterans of the series. Every twist, turn, setback, and loose handhold is familiar and predictable. Fortunately, this predictability is offset somewhat by the game's stunning art direction, stellar voice work, and luscious graphics.

India, the setting of the game, is particularly gorgeous. Its verdant jungles, sun-baked rock formations, and crumbling, ornate temples shine on the PS4. Teeming with animal life and bearing the marks of ancient civilizations, it's practically a character itself. Those seeking a game that looks amazing, sounds great, and performs smoothly will be impressed by The Lost Legacy's audiovisual delights. 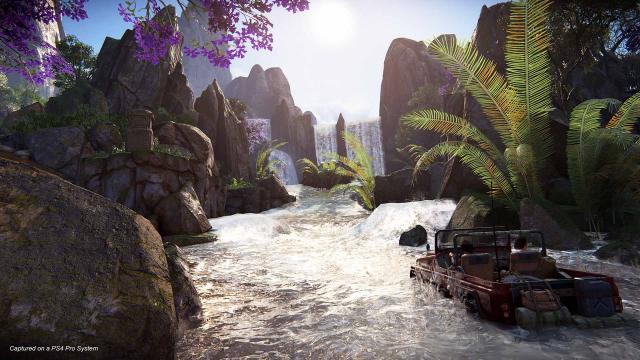 While the production values in The Lost Legacy are beyond reproach, its gameplay systems are more dubious. The game embraces the series' trifecta: scripted platforming/walking, puzzle-solving, and third-person shooting. It also continues the "wide linear" experiment begun in Uncharted 4. Chapter 4, one of the game's best, is a miniature open-world with several landmarks that can be explored in any order.

The level of player engagement at any given time in The Lost Legacy depends greatly on which gameplay system is dominant. For the game's first three chapters, players have almost nothing interesting to do. They'll follow a girl through a marketplace, walk through some back alleys, climb across some rooftops, and look at the fronts and backs of a few artifacts. The tedium is interrupted by a rooftop escape at the end of chapter 2 — during which there are actual decisions to make, paths to choose, and room for error — and a shoot out at the end of chapter 3 that demands patience, planning, and perseverance. 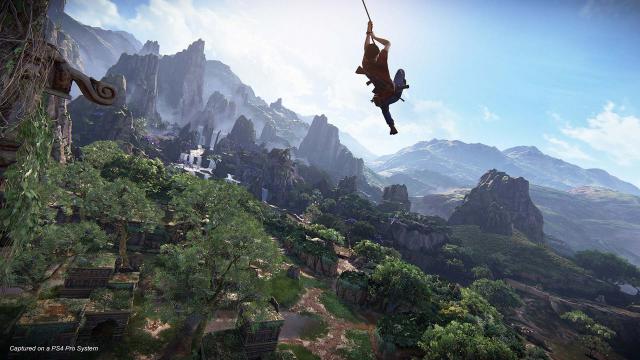 Chapter 4, the oddball of the game, opens things up in impressive ways. Players must consult a map to navigate the difficult terrain, infiltrate strongholds guarded by armed insurgents, and solve a number of environmental puzzles. There's even a long, substantial side-quest with a worthwhile reward — not a trinket used to unlock concept art, but a usable item that changes the rules of the game in a meaningful way. Uncharted needs more of these and fewer treasures and photo ops, which often feel like filler.

The following chapters contain elements both good and bad. Enemy encounters, in which players can adopt an aggressive or stealthy approach, are the best of the bunch. Battlegrounds often feature locked chests, which Chloe can open with the help of a lockpick and which bestow powerful ammo and weapons, including a firearm new to the series: the silenced pistol. This is a boon to players who prefer stealth, as they can dispatch sentries at range while maintaining cover. It's a game-changer. 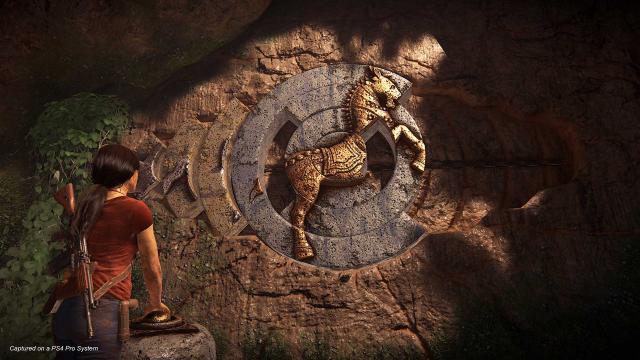 Areas heavy on platforming are tedious. Apart from scripted moments where Chloe is meant to fall or slip, it's almost impossible to fail. Entire sections could be completed by a blindfolded player pressing forward and spamming the cross button. Similarly uneventful are the spots where Chloe walks from point A to point B, or stands still to listen to a speech or engage in conversation. These spots are helpful as plot drivers but unhelpful tools to promote player engagement.

Puzzles are a bit of a mixed bag. Some are oversimple or dull, but others are extraordinary. A mid-game puzzle in which Chloe must match the shadows of sculptures to patterns on a wall is especially good. It recalls the mural puzzle in chapter 11 of Uncharted 3. 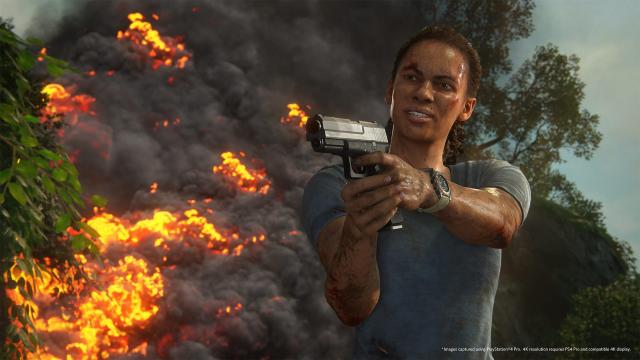 Things pick up considerably during The Lost Legacy's final two chapters, which are heavy on firefights. Chapter 9, the game's final chapter, is also its best. Set atop a speeding train, it brings to mind one of the most memorable set-pieces from Uncharted 2. Players will need to outmanoeuvre and defeat enemies both on and beside the train, hijack nearby vehicles, and dodge environmental hazards. It's a true test of skill and timing, unlike much of the game, which is scripted to within an inch of its life. It's the best chapter in The Lost Legacy, and one of the single best chapters in the entire Uncharted saga.

The Lost Legacy is an Uncharted game, for better and for worse. It looks absolutely amazing. It sounds spectacular. Yet it's so insistent upon sticking to a script that it often forgets the player's valuable position in the equation. When the game does relinquish control, during firefights and around puzzles, it tends to improve sharply. Such is the case in chapter 9, where the designs of the studio meet the input of the player to create a winning symbiosis. Earlier chapters are far less successful and consistent. The end result is a game that's less than the sum of its parts.

This review is based on a retail copy of Uncharted: The Lost Legacy for the PS4

This is a great review. You bring up really good points about the game having incredibly shallow climbing mechanics. The way the game constantly forces you to walk in order to listen to the characters talk is infuriating and I'm sad to see that Naughty Dog continues to do this.
I wish there were more reviews like this calling out these bad design choices years ago, as every Naughty dog game has been doing this since the first Uncharted game all for the sake of its "amazing story".

Finally, someone else who agrees!

My august-highlight after Yakuza Kiwami :)