Bullet hell shooters are known for many things — good, bad, and ugly — but rarely are they defined by a sophisticated, morally-ambiguous storyline and gorgeous 3D models. Yet such is the case with Sine Mora EX, an extended version of the original Sine Mora, released back in 2012. It's the rare shoot 'em up in which production values are equal to the staples of the genre: swarms of enemies, power-ups, and monumental bosses. And while Sine Mora EX excels in the storytelling and visual effects departments, it stumbles a bit with the basics.

The story in Sine Mora EX is remarkably complex, unflinching, and grim. It follows two parallel storylines, occurring in the same spaces many years apart. In one storyline a group of freedom fighters attempt to deal crippling blows against a genocidal empire. In the other, a grieving father seeks revenge against imperial pilots who shot his son for refusing to commit genocide. The game jumps back and forth between each timeline, dealing with uncomfortable topics like war, murder, sexual assault, blackmail, and treason along the way. 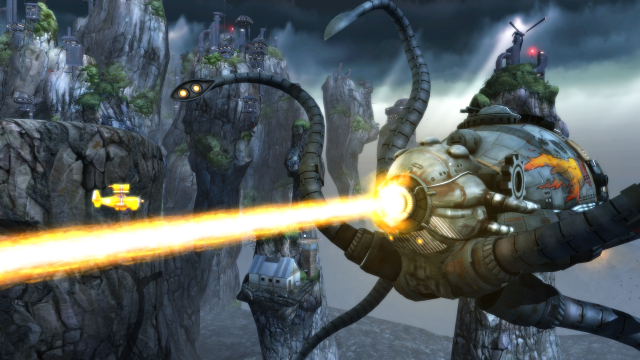 In the game's original release, plot points were explained with blocks of text, supported by Hungarian voice-overs. In Sine Mora EX, an English dub was added. It's a mixed bag. Some of the voice actors deliver solid performances; others not so much. What hasn't changed, though, are the game's artistic assets, which are breathtaking. Although it plays on a 2D plane, all of the models and backgrounds are rendered in 3D.

As a result, the aircraft and vehicle models in Sine More EX have amazing depth and weight to them, and the game's backgrounds are gorgeous — sometimes distractingly so. The original design work, done by developers Digital Reality and Grasshopper Manufacture, is routinely stunning. The microscopic level of detail is particularly impressive. In a late-game level set in an imperial city, it's possible to spot individual citizens dancing at a night club. Earlier, in an ocean level, a lone fisherman is seen sitting atop a rocky outcropping. 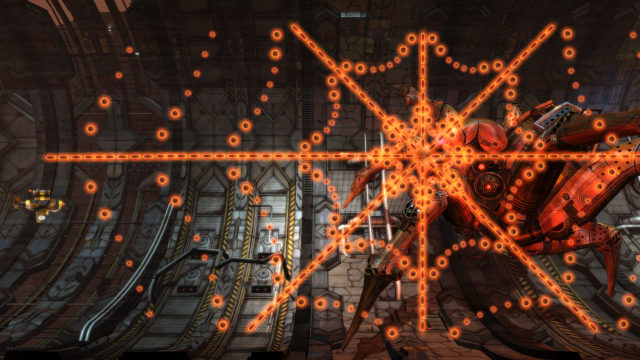 Although the story in Sine Mora EX is riveting and its art assets transfixing, its mechanics — specifically its time mechanic — are less impressive. Unlike many other horizontal shooters, Sine Mora Ex does away with health bars. Instead, it employs a clever time mechanic that's something of a double-edged sword. Each level is equipped with a countdown clock. By defeating enemies and collecting power-ups, players can extend the clock. However, absorbing damage will shorten the clock. Once it hits zero, it's game over.

It's an interesting twist on the traditional shooter formula, but it can turn frustrating — particularly when it's paired with the game's unforgiving power-up structure. Throughout Sine Mora EX, players will collect red orbs that boost each plane's firepower. Maxed-out firepower is absolutely necessary to defeat bosses in a timely fashion. However, getting hit just once by a stray bullet will scatter all the collected red orbs around the screen, which bounce a few times and then disappear forever. Without enough red orbs it's difficult to shoot down the enemies that grant extra time, which is needed to move forward in the game. It turns into a vicious cycle. 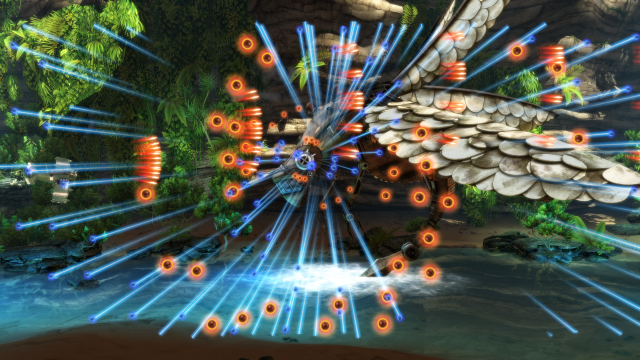 Apart from the game's main story and arcade modes, Sine Mora EX adds some new local multiplayer modes. The entire story mode can be played with a friend in local multiplayer, and there are even a few PvP options. These all feel tacked-on and uninspired, though. There's also Boss Training mode, a holdover from the original release, in which players can relive Sine Mora EX's collection of spectacular, challenging boss battles, one of the title's high points.

Sine Mora EX is a game that's beautiful to watch and mesmerizing to absorb. It features a difficult, bleak, and engaging story and some stunning 3D models and backgrounds. Intellectually and aesthetically, it's a knockout. However, it's held back somewhat by a stingy power-up system, a burdensome time mechanic, and a few mundane modes.

This review is based on a digital copy of Sine Mora for the XOne, provided by the publisher.

I finished this game on 360, didn't really care for it, and don't remember much about it. Maybe I will revisit on X1, but not for full price.