At its core, USFII is an interpretation of HD Remix. It features the same iconic one-on-one 2D fighting gameplay, with all the characters introduced across the series so far, including Akuma, who's playable immediately and not hidden away. USFII adds to the mix two variations of classic characters Ryu and Ken: Evil Ryu and Violent Ken. Evil Ryu, originally from Street Fighter Alpha 2, is something of a cross between Ryu and Akuma. Violent Ken, the more interesting of the two, sports a shadow teleport and an awesome six-hit super move. 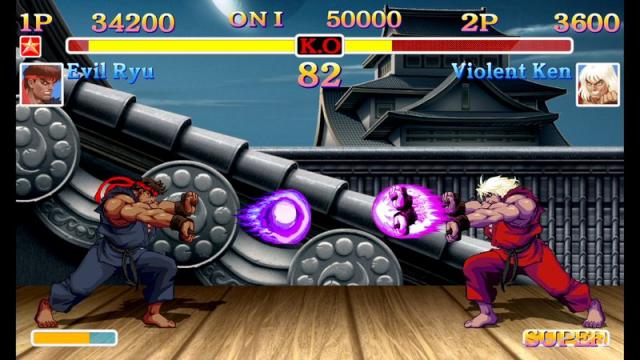 The HD graphics from Remix, drawn by UDON, return in USFII, along with the option to switch between classic sprites and UDON's handiwork. Moreover, players can mix and match old-school audio effects with new-school graphics and vice versa, not unlike Wonder Boy: The Dragon's Trap. Bolstering the visual diversity of the game is a robust color editor that allows players to create custom color palettes for each character. Want an Incredible Hulk Zangief or a monochromatic Chun-Li? No problem.

In addition to color mode, USFII includes Arcade Mode, Versus Battle, Buddy Battle, Online Battle, Practice Mode, and "Way of the Hado." Arcade Mode is your typical single-player campaign with an animated ending cut-scene specific to each character. Versus battle pits players against each other or against a computer-controlled opponent in local multiplayer. 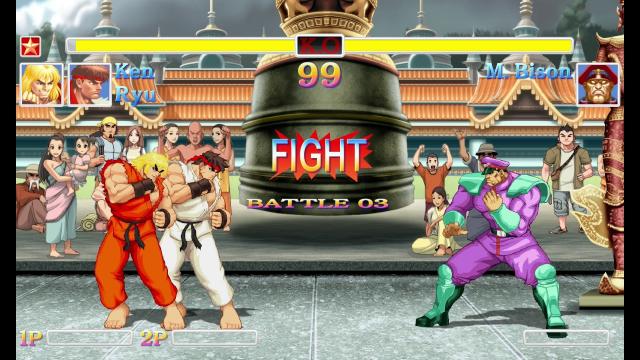 Buddy Battle, a take on Dramatic Battle from Alpha 2 Gold, allows two local players to team up against a CPU opponent. It's a nifty mode, but a little undeveloped. There are only four CPU enemies — Violent Ken, Evil Ryu, M. Bison, and Akuma — and all fights take place on a single stage. More developed is Online Battle, which allows for ranked and unranked battles and, assuming strong Wi-Fi signals, stable performance.

Practice mode is, gratefully, a vigorous mode with a lot of customizable options. There are a multitude of training dummy and super meter options, along with a command history option that shows players button inputs and time between commands. It's the perfect place to practice your special moves, combos, and spacing strategies. It's also a good place to adjust to the default Joy-Con control scheme, which is less than perfect. The bad news is that the segmented d-pad on the left Joy-Con is rubbish; the good news is that the analog stick works surprisingly well. 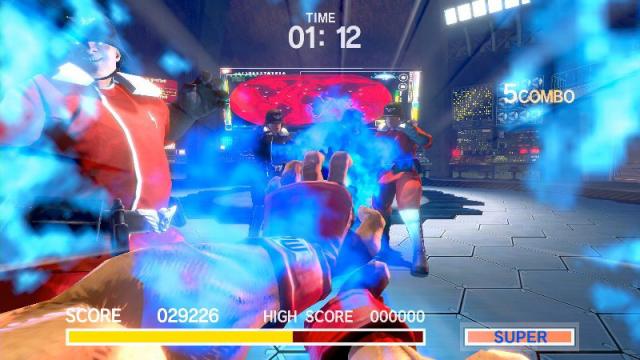 The least of these modes is Way of the Hado, a poorly-conceived first-person-perspective motion-controlled nightmare. By using the Switch's Joy-Con controllers, players can attempt to recreate some of Ryu's most iconic moves, like hadouken and shouryuken, against waves of M. Bison henchmen. The problems here are the layout of the mode — Ryu stands stiffly while hired goons approach him like so much hadouken fodder — and the motion controls, which are unresponsive.

Capcom should have ditched this mode entirely and used the resources to build in to the game Group Battle, Tournament Battle, and Timed Battle, all included in the Genesis and SNES ports of Super Street Fighter II, 23 years ago. 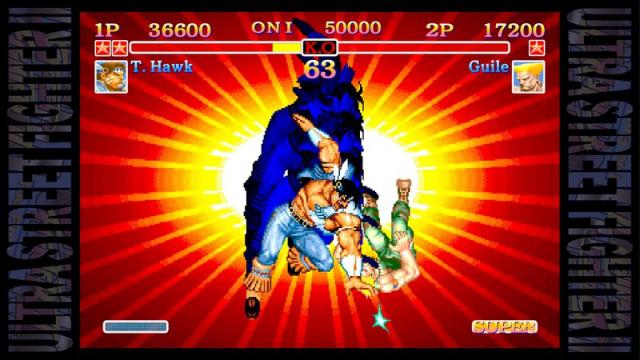 Finally, USFII includes a Gallery that incorporates pages from Street Fighter Artworks: Supremacy, an out-of-print visual history of Street Fighter released previously only in Japan. It doesn't affect gameplay in any way, but it's a welcome piece of bonus material for fans of the franchise.

Despite an underdeveloped Buddy Battle, a poorly-conceived and executed "Way of the Hado," and some missing modes, Ultra Street Fighter II is joyful to play. There is something intrinsically rewarding about the grounded, strategic, perfectly-paced battles in the game. With two new characters, plenty of online and offline options, bonus material for fans, and, most importantly, tried-and-true Street Fighter gameplay, USFII earns its "ultra" title.

This review is based on a retail copy of Ultra Street Fighter II: The Final Challengers for the NS

I played a bit of it, and I liked it. However, I really wish that they had some more content, they could have say had ports of World Warrior, Champion Edition, Hyper Fighting, Super and Super Turbo, and give us the option between more music styles, like CPSI, CPSII, FM Towns version and Super Street Fighter II Turbo PC version. That'd make it so much better, which what I assume would be not too much effort.

As someone who hasn't played Street Fighter since the SNES days, this is a great package. Shame about the iffy motion controls in way of the Hado. If implemented correctly this could have been a fun little diversion.

Not a Street Fighter player, so come someone who is explain to why they would choose this to repackage for the Switch instead of 4 or 5?

Nostalgia sells I guess. Chances are they thought this would appeal to older fans (which make up a good chunk of the switch userbase), thus making more than 4/5

I know Capcom can't do 5 due to a deal they have with Sony, for it to be a PS4 and PC exclusive for some period of time. As for 4, I think it's because each Joycon by itself lacks enough buttons for all of the inputs required for things like Super moves. Which doesn't seem like enough of a reason to me, but they seem to believe that local multiplayer is the key selling point.

Part of the Switch is appealing to lapsed gamers (or former gamers) and that segment of the market is more prone to buy SF 2 rather than one of the newer games.