Despite shipping alongside one of the most celebrated video games of all time, the Nintendo Switch has had a rather austere launch window. That window appeared bigger and brighter on March 9, when Blaster Master Zero arrived on the eShop. A remake of the NES classic Blaster Master, Blaster Master Zero is a fantastic reboot that pays tribute to the past while accommodating the present. It's also a boon for Nintendo's fledgling hybrid. After Breath of the Wild and Shovel Knight, it's the best game available on Nintendo Switch.

Blaster Master Zero follows closely the story of the Western release of the NES original, with a few adjustments here and there. A young man named Jason discovers a strange frog, whom he calls Fred. When Fred jumps into a wormhole, Jason follows after him. He finds himself underground, in the decaying ruins of an old Earth. Nearby is a super-powered tank called SOPHIA III, which Jason uses to track Fred, fight the mutants that live inside the planet, and eventually discover a more intricate plot. 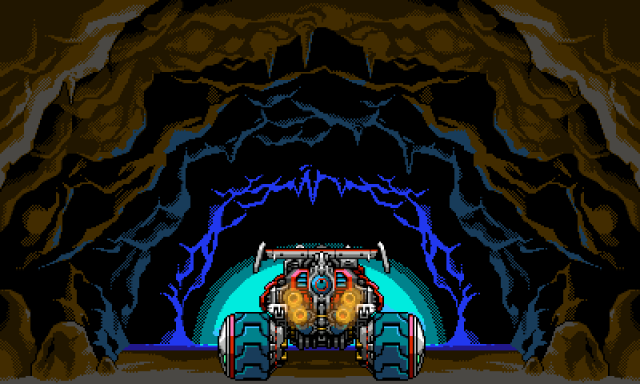 The story is profoundly silly and suffers a bit from translation issues, but it's charming in a 1980s throwback way. Where else but in a video game would a young hero discover a mutant-fighting tank underground while searching for a frog? Also charming is the game's retro pixel art. Developer Inti Creates used the assets from the original Blaster Master as a starting point to create 8-bit graphics that work beautifully with Blaster Master Zero's old-school sensibilities.

As in the original, Blaster Master Zero is a 2D platformer-shooter hybrid that is inspired by the non-linear progression of Metroid. In sideview perspective, players control Jason as he navigates SOPHIA III across suspended platforms, under water, and over spikes and lava flows. By pressing X, players can eject Jason from the tank and explore on foot. This will prove necessary to access the many dungeon entrances scattered across Blaster Master Zero's large, interconnected game world. Once inside a dungeon, the sideview perspective shifts to top-down. 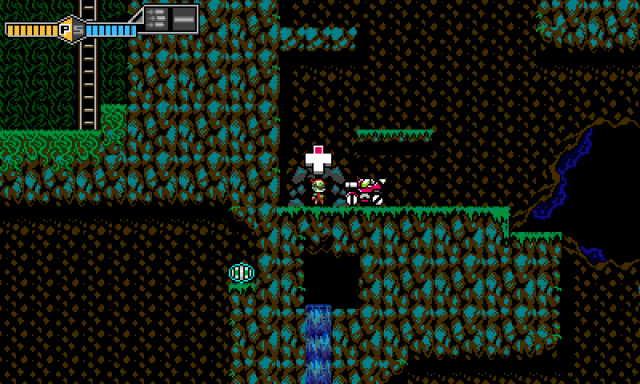 Part of what makes the game so successful is that both perspectives — and the mechanics and weapons that go with them — are equally engaging. In top-down mode, Jason employs several sub-weapons and explosives to defeat mutants, find secret shortcuts and, eventually, topple one of many boss creatures. Using the power-ups, keys, and maps found in each dungeon, Jason pushes forward across several detailed, diverse subterranean environments via SOPHIA III in sideview mode. Each half of Blaster Master Zero complements and informs the other.

While Blaster Master Zero looks like a game plucked from 1988, it actually boasts quite a few modern revisions. In addition to new sub-weapons, areas, and storylines, the game features save points and an in-game map. This makes for a far more forgiving and less disorienting experience. Another new element is the game's local co-op mode. In this mode, player two controls an aiming reticle and fires at enemies while player one controls SOPHIA's navigation and weapons systems. It's essentially a "helper" mode, as in Super Mario Galaxy. Still, it's a welcome addition. 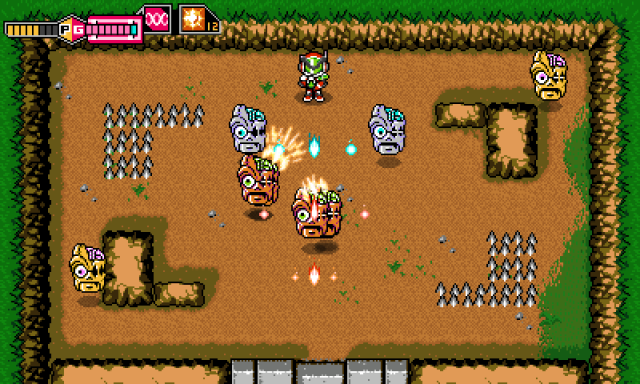 New and revised boss battles are another highlight. Take, for example, the battle with Hard Shell, a giant mutated crab. In the original Blaster Master, Hard Shell strafes left and right, shooting toxic bubbles. In the remake, Hard Shell moves quickly around a large complex, charging at Jason. It's not unlike an aquatic version of the Vulcan Raven fight from Metal Gear Solid. Regrettably, some of the more interesting bosses are recycled during Blaster Master Zero's endgame.

That's a relatively minor quibble, however. Apart from a few localization issues and a handful of recycled bosses, Blaster Master Zero stands as a shining example of a retro remake done right. Inti Creates left the core mechanics intact and textured them with modern conveniences. The result is a title that winks at the 1980s but provides a gaming experience entirely accessible and engaging for players in 2017.

This review is based on a digital copy of Blaster Master Zero for the NS, provided by the publisher.

I've gotten up to level 7 so far. Pretty solid remake of the original. My only qualm is that the "Wave" blaster, the most powerful level of Jason's gun, is way too OP and makes the "dungeon" areas way too easy. Well, at least until you get to level 7 and the game hits a big difficulty spike.

Btw, I would take Blaster Master Zero over Shovel Knight any day of the week

What an awesome game. I really miss playing it. There is no reason why any Switch owners should not have this gem. Hopefully we a have sequel sooner rather than later.

I've just beaten it, and it was a really great experience. I'm not sure if I prefer Shovel Knight over Blaster Master, it's a really tough decision. But both are really worth the price. I agree with the pros and cons. I'd probably add Jason speed in the action-based sections. I'd prefer that he was faster tbh. But generally I was surprised by this game's awesomeness.

I forgot this was also a launch game! I gotta pick this up! I played the original all the time as a kid

Oooh, it's a remake of the original. Since I never played the original, this will be entirely new to me, which makes me pretty excited. I gotta get this game at some point in time.

I'll be getting this when I finally get my hands on a Switch. The save system means that I'll finally be able to finish it... the NES version is brutal with its limited "continues".

I'm still listening to the boss themes. They are so awesome! I really wish there was a Boss Rush mode