More details on the Nintendo Switch features have been posted on the official Nintendo website.

The screen itself is 720p 6.2 inches and features multi-touch capacitive. It comes with 32GB of internal memory. The storage can be expanded by using a microSDXC card. 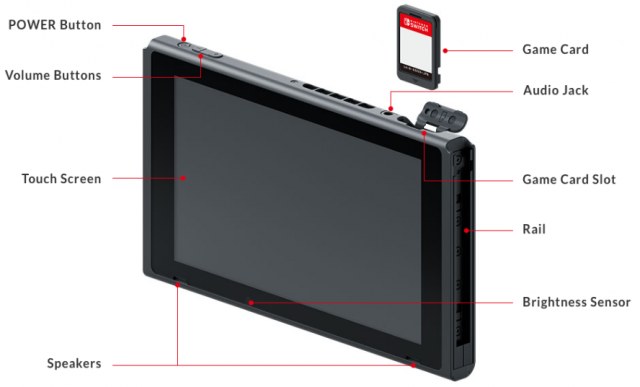 The battery can last for more than six hours, however, while The Legend of Zelda: Breath of the Wild it will last for around three hours.

The Nintendo Switch launches on March 3 for $299.

32 GB is pretty small internal storage, no? maybe having flash carts instead of disks will help with this (?). These days with disc based newer games it seems like everything is dl'ed rather than actually data on a disc

Yeah, it seems small, but Nintendo consoles usually don´t require games installation. Thankfully it is expendable by memory cards for people who want to get digital games

The official Nintendo website now says it takes micro sdxc cards, so it should be pretty inexpensive to expand storage if you prefer buying games digitally. :)

Yes, if the flash cards have a fast enough read time (somewhere close to a 5400RPM Hard drive in order to match a PS4/Xbone) then you could play any game off the physical media and completely eliminate the need for hard drive installs or data packs. I think that's what they are shooting for.

Not really, the cart eliminate the need to install to internal memory to play and if the developer is planning to be patch heavy, the carts themselves can have a bigger memory area for saving.

And since carts a little more expensive to make, it should make most developers think twice about releasing a game like the last Tony Hawk Pro Skater where there was essentially nothing on the disc.

All seems budget, 32gb isn't much and 720p isn't amazing, but it does come at a premium 299,- when compared to the shield, I really hope the price drops fast or they make a 100% handheld version

The screen is 720p. 1080p games are possible when the screen is docked. Besides, were you honestly expecting 1080p in portable mode on a screen that is slightly larger than an iPhone 7 Plus? Because most people I've been talking to didn't think it would do 720p.

720p is great for a small screen like that. But I believe visually intensive games will be sub-HD in portable mode. 32GB is fine assuming you mostly buy physical games.

I would love a portable Xbox 360 that's about the size of the Switch.

Nintendo could make a more powerful device, but then there is a price issue.

Can not believe it, is the Nintendos serious? in my opinion, 32GB and the battery are a joke. 2018 then a stronger Hardware-upgrade with better battery for the same price, think of my words :)

According to Digital Foundry, the game is 900p in docked mode.

720p screen? This is going to be a disaster. To the folks above, with all due respect 1080p+ has been available even in $150 budget smartphones for a good 18 months at least. To the guy above how can it scale to 1080p when docked if the resolution of the screen is 720p. Not possible.

The resolution isn't upscaled when docked. It's actually the other way around. It's downscaled when taken off the dock.
http://www.gamespot.com/articles/mario-kart-8-nintendo-switch-resolution-and-frame-/1100-6446930/

no camera on the machine itself, eh?

720p is a god res for a screen that size. Hoping it can scale games to 1080p when docked though.

Considering how it clocks when docked, it should be able to.

hardly god res. subpar to most modern smart phones of the last few years, but it is definitely adequate. much prefer battery life and consistent framerates than higher res anyway.

to be fair nanarchy, most modern smart phones of recent years generally cost 300$ and beyond at launch, with the nicest ones being like 600$ and beyond. Just saying.

@mountaindewslave just pointing out 720p aint anything special for a device that close to face, it is good enough though.. Also maybe 5 years ago it was on 300-600 dollar devices, now $100 devices come with at least that res..

It does scale to 1080p when docked