What would happen if a studio placed Logan's Run, Buck Rogers, and Metroid into a blender? Headlander, that's what. Part dystopian science-fiction, part parody, part Metroidvania, Headlander is exactly what fans have come to expect from the gleefully demented folks at Double Fine, who've made a living adding unique personalities to established genres. While this latest game isn't as brilliant as previous Double Fine titles, it boasts the spectacular art direction and subversive sense of humor for which the studio is known.

Set in a science fiction universe that takes place in the far future and yet somehow is stuck in the 1970s, Headlander follows the trials of a disembodied head in an airtight helmet. Rescued by a mysterious character named Earl, the hero (or heroine, depending on player choice) must navigate a world populated exclusively by robots with human consciousnesses inside. His or her mission is to find all the empty human bodies and put a stop to a rogue AI called Methuselah. 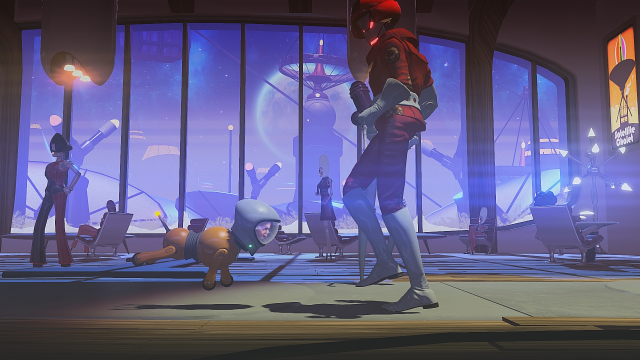 For the most part, Headlander follows the tried-and-true formula of a Metroidvania. There are secret areas hiding upgrades, real-time combat, and lots and lots of backtracking. What makes Headlander unique is its head-swapping mechanic, which allows players to land the hero's head on any number of robot bodies. In order to access a waste port, Headlander will need to land on a cleaning droid or dog. If you want to move past a green door, better find a green-coded Shepherd (Methuselah's henchmen).

Another feature that makes Headlander different is its upgrade system. By completing main missions and side quests and by finding hidden stations, players will earn upgrade points that can be used to enhance Headlander's abilities. You'll be able to upgrade regenerative powers and melee attacks, and also unlock some pretty nifty superpowers like the ability to turn an enemy Shepherd into a friendly auto-turret. 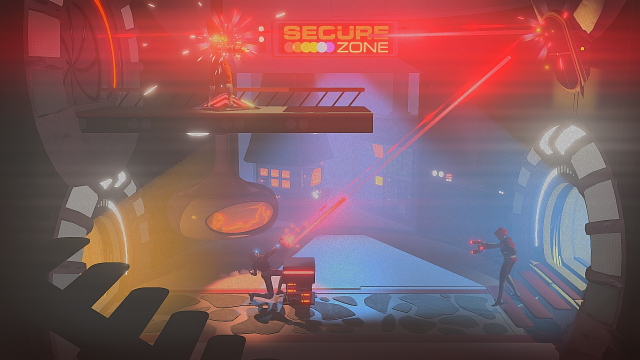 Upgrades will come in handy during the game's many shoot-outs. Shepherds become more dangerous and more powerful as the game progresses, and they can quickly turn any room into a bullet hell. Players will have to jump nimbly from body to body to stay alive. Headlander's focus on action and combat can be overwhelming at times, especially in the final act which is fight after fight culminating in a gruelling boss battle. In this way, Headlander is the inverse of Song of the Deep, which was light on combat and heavy on exploration and puzzle-solving.

One thing Headlander shares with Song of the Deep, apart from its Metroidvania formula, is slowdown. Rooms with lots of lasers flying about cause the game to slow to a crawl. It happens rarely, but it points at some less-than-stellar optimization from Double Fine's programmers. 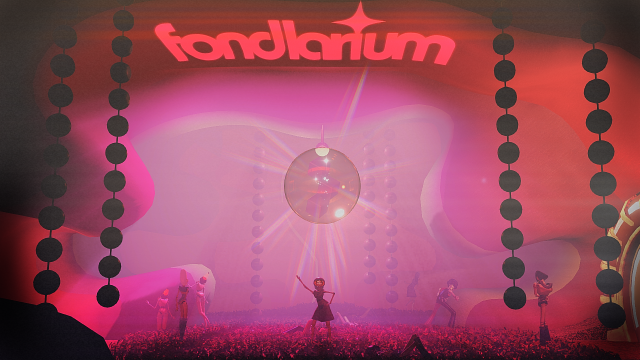 Luckily, these technical hiccups are few and far between. For the most part, Headlander plays smoothly and looks great. In fact, the art direction is some of Double Fine's best. With its retro-futuristic aesthetic and neon palette, the game overflows with personality and charm.

Headlander is neither Double Fine's best game nor its most ambitious. Yet it's a solid, quirky, funny, and bold experiment in a genre new to the developer. It suffers from some technical problems and from a late-game difficulty spike, but overall it delivers plenty of mental and physical challenges and many interesting gameplay scenarios.

This review is based on a digital copy of Headlander for the PS4, provided by the publisher.

Good review, I've only played a bit of it, seems promising. And I noticed the game was just updated to Version 1.02 - bug fixes and performance optimizations.