Trust is a tricky thing. It takes years to earn and only a few seconds to lose forever. With the advent of Kickstarter, trust has, in a way, been commercialized. Yet those that traffic in trust play with fire. Just ask Keiji Inafune, who has a lot of grumpy backers to answer to after the lackluster launch of Mighty No. 9. Next up for the proving grounds is Koji Igarashi, who's leveraging his substantial resume (and reputation) to fund Bloodstained: Ritual of the Night.

In order to whet the appetite of backers, the Bloodstained Kickstarter sent out Steam codes for the recent E3 demo to all those who backed at the $60+ tier. The demo takes place on a sinking, crumbling galleon that's besieged by a giant sea monster. The comic-book shading makes the visuals pop, but the level was too empty and sterile to feel truly alive and organic. 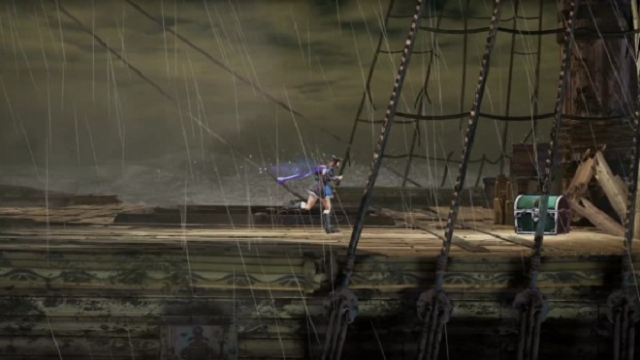 Playing the demo, you can spot the parallels to Igarashi's earlier work with Castlevania immediately. Our heroine Miriam moves, attacks, and back dashes with the same grace and speed as series stalwart Alucard. She explores a labyrinthine map populated with grotesque enemies, hidden rooms, and lots of treasure chests. As she beats up on baddies, her experience level also climbs.

Speaking of grotesque enemies, Igarashi and company have delivered the goods. There are only a few monster types on display in the demo, but almost all are horrible and repulsive - in a good way. Death animations are similarly impressive. Oily, gooey monsters pop out of the floorboards and then literally lose their heads as Miriam slashes at them. Squid-like sea creatures dissolve in a flash of flame and bubbles under the intense heat of a fireball attack. 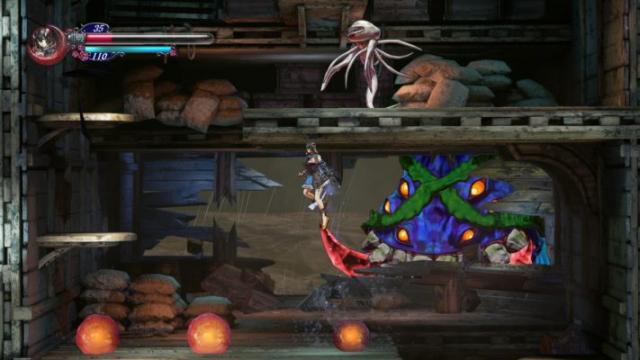 That's not the worst part about the boss, however. The fight is simply not fun, and surprisingly basic for a designer as ingenious as Igarashi-sama. This woeful fight diminishes the entire demo, unfortunately. Combat has no weight, no impact. Enemies don't flinch under assault, and Miriam's strikes don't leave an impression. 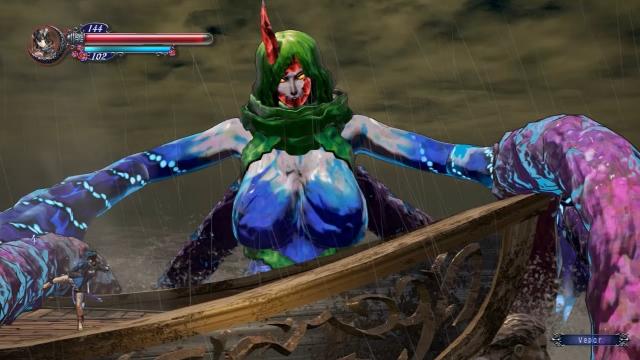 With its lifeless, mostly-empty level and unsatisfying combat, Bloodstained fails to impress. The good news is that this is an early alpha build, and Igarashi and company have until 2017 to figure out what works and what doesn't. Meanwhile, Kickstarter backers will be watching intently as another industry giant lays his reputation on the line.

Wow, I'll be the first to write something positive here. Sorry, but I couldn't possibly disagree more with the article and first impressions. I watched the demo and it looks beautiful to me. Seriously, this is SotN in 2.5D and I couldn't ask for more. The music too, was totally awesome. As if the atmosphere was anything different from what IGA has done in the past lol. I think you all are just reaching now due to Mighty's HUGE disappointment. It's as if you people are now looking for disappointment and expect it. This is nowhere close to being a disappointment like Mighty and especially so considering how early the demo still is.
This is every bit as fun and cool as SotN's stage and the rain effects look atmospheric and gloomy. The environment itself calls for a gloomy, lonesome vibe and they achieve that feel. It's fantastic and this will totally be one of the greatest games ever made when all is said and done. I cannot wait for it!

My opinion was based on gameplay not visuals

I hope you're right! I pledged $60 so I'm rooting for the game to be great. I do recommended you try the demo yourself, as there's a big difference between watching the Bloodstained demo and playing it. The feel of the game is off. When you play a game like SotN or Aria of Sorrow, an enemy encounter has weight and feedback. In the Bloodstained demo it just feels like Miriam is slashing at holograms - there's no oomph, for lack of a better word.

I have the E3 "demo", and I must disagree with the conclusions of this post. First, its not a demo, its a special E3 teaser to give a glimpse of a work still in progress.

Mechanics of movement and combat are solid, but sometimes Miriam wouldn't attack in air when I wanted to. Not sure if it was operator error, or a glitch. Whatever, game isn't released yet.

The environment of the demo was very pretty. I can see why the author thought it felt empty, but again this is an early teaser of an incomplete game. What I was most looking for was whether the character moved and responded in a satisfying way, and she does.

The final boss of the demo was very clearly not finished. Its attacks were basic and easy to predict. The boss was the least polished portion of this teaser, and that is probably because THE GAME ISN'T DONE YET AND THIS IS A PRE-ALPHA TEASER!.

Seriously, if anyone is trying to judge the final product by a demo that came out a YEAR before release, they need to get their heads examined.

What this teaser showed was that a TON of progress has been made in the 1st year of development, and that development is proceeding in the correct direction. Nothing in the demo, to me, screamed "warning warning warning, Dev is gonna f this up!". Movement and combat were solid, animations were fluid, and enemies were satisfying. The only problems that arose were easy to write off as "feature not fully implemented".

TLDR. Bloodstained demo was awesome, but clearly not a finished product. Hype for final product increased, not decreased.

THANK YOU! Good to know there are others here with some sense. This "E3 teaser" is far FAR from a failure.
Jim Sterling, for one, seemed to be enjoying it a great deal and also but a pledge on it.
I wish I could support it.

I also felt that something was missing... but hey the music is pretty cool!

i disagree, the combat is already evolving. You can cast spells now with the analogsticks, just by turning the analogstick to the direction your spell should shoot, the flame cast for example. The boss fight isnt the final version, after you ''beat'' the boss it just cuts off. We will probably see a second transformation or something.

Exactly how I felt about it. Hopefully that gets back to the development team. Its getting there though.

was there really a need to be sexist against women with larger breasts in this article?i find that offensive

Oh Gosh, come one! For an early demo this is great, if you are using Mighty as comparison just think how miserably M9 failed to be the Megaman every backer wanted, this demo is more Castlevania than those made by MercurySteam, we are finally getting a new Igavania.

Never can tell with these things but I believe it makes sense that this was a fairly unfinished area that was "finished enough" to toss out for backers in time for E3. Everything but Miriam and the boss are boring shades of brown, something I believe will be jazzed up and altered in the final product.

And my opinion is based on BOTH: visuals AND gameplay. I don't even have to play it to know it plays like SotN. I have eyes. Miriam even moves gracefully like Alucard. Sorry, but if this game is boring so is every other Castlevania game lol.