Mojang has announced Minecraft has hit a huge milestone, over 100 million units have been sold worldwide.

At the time of the announcement the game has sold more than 106 million units and has sold over 53,000 units a day in 2016 alone. Even four units were sold in Antarctica.

View the breakdown of sales by platform in each region below: 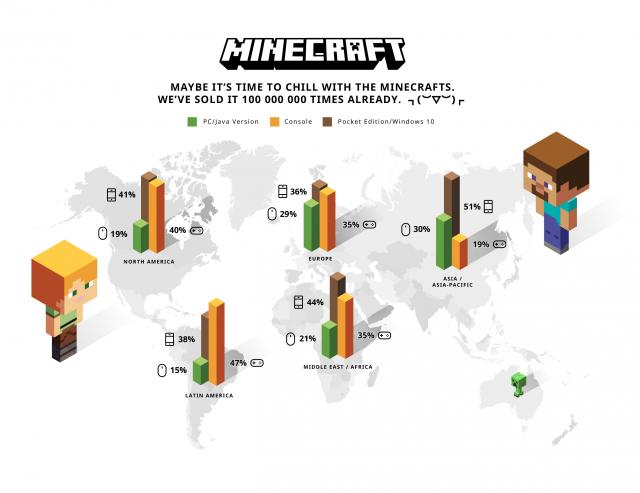 "We’d like to offer our heartfelt thanks to every one of you who’s bought Minecraft over the past few years, no matter which platform you play on," said Mojang's Owen Hill. "We’re constantly in awe of our community and the amazing things you achieve together. You really are the best."

There are more than 40 million active monthly users playing Minecraft.

Best selling game of all time in the Antartic confirmed? Also, I'm surprised the PC version is the one that sold the least.

Something isn't adding up with how it absolutely exploded on PC for years on end and apparently this is the end result.

Yeah I'm shocked pc is so far down. I was sure it was the leading platform

Yeah there was so much hype about minecraft on pc and it's the perfect game for that platform. I was sure it was the most successful. But clearly not

But we can forget that it started free for the first few years along with the fact that it landed on the platform before 360 even had the game. Of course the number of those currently playing it now with online communities will still be with PC.

But we can forget that it started free for the first few years along with the fact that it landed on the platform before 360 even had the game. Of course the number of those currently playing it now with online communities will still be with PC.

It's been on sale on pc long before most platforms so pc definitely has an advantage over the console market. As I said I'm shocked but I'm happy to see it. Just shows how important console gaming is and I want that to live long into the future

Not really, not when it was going for free for a number of years beforehand. Of course you're happy to see it, you're happy when your system dominates everything and nothing else thrives, you really don't need to hide it man.

Wow, you did not just go there!! Were talking consoles vs pc. Not Playstation versions vs pc. Chill out man!

Dude the way you talk about it and all that jazz doesn't really shy away from how you feel. You also played it out the way before your big "reveal" nearly two months ago. Also I wasn't directly referring to PS either just to get that out of the way.

You've had this weird sense of self-sanctification about you whenever you mention how good it is or how "unfortunate" it is for the other platform and I'm honestly not the only guy that is picking up on that attitude at all. I'm surprised the numbers are what they are but I'm not lording it over the PC and claiming consoles will be way better or over-lording/dominating the way you would describe it, that to me is the self-satisfying part.

Also it's been two years since I joined and it hasn't taken me long to take notice of you taking your time to jump in and toss one over people you don't like when something doesn't go their way, I've seen you do that many a time, even to a point where you drive them to getting mad enough to curse and get them banned.

Besides in the end the sales numbers shouldn't even matter because it's meant to be the game that counts and I for one have had 5 and a half years of fun with it and the communities I've formed and hung with.

Here I didn't read past the first line because it's just an off topic rant you wasted your time writing out. Have something on topic to say for example how they've sold more minecraft on consoles I'll gladly reply!!

This is the exact same argument you gave out last time but in PM form when you refused to acknowledge what you do and thus proved my point.

It doesn't matter in the end because you'll figure out something else to say retort wise. You've already said your say on the topic regardless and I've said mine.

Lol what are you even on about. Stay on topic my friend and leave the rants behind. I'm enjoying some wine in sunny Madrid right now. Cheer up!

I've been on topic since the start, the detour happened when you decided to jab. I'm not even upset and don't need to cheer up as I'm happy with how Minecraft is.

Only a perceived jab from your end in what was a perfectly fine statement. You dragged it off topic taking things the wrong way.

And you just did it again even later. I was at a very fancy graduation ball that night so wasn't going to be on Vgchartz lols

What are you two doing? I keep getting notifications from this every hour or two. XD

Haha I knew you were going to say that xD Sorry about it but me and chazore have a really strong bromance and just love making conversation!

He loves me tho

You're harmless and adorable. How could I not love you x

Voices are always harmless, it's the skin that counts.

Voices are always harmless, it's the skin that counts.

Double posts are harmless too

I'm sure they are.

I'm sure they are.

Not sure if severely hungover or seeing double

That explains the need to repost.

And this doesn't even include the $29.99 physical version of Minecraft on the WiiU. Like always, a good purchase from Microsoft :)

I'm honestly surprised it's that low. The sales have been so crazy I would have thought it hit 100m a long time ago.

And I have not downloaded on the Wii U. Guess I need to check.

What else would result in being ported onto everything with a screen?