Sony may have pulled the plug on first party software development for the PlayStation Vita, but there's at least one company out there that still believes in the little handheld that could. That company is DrinkBox Studios, which brought to the Vita Tales from Space: Mutant Blobs Attack, Guacamelee!, and now Severed.

On the FAQ page for Severed, DrinkBox Studios answers the question "Why didn't you just make Guacamelee 2!?" with a simple answer: "We needed a new creative outlet." Well, the folks at DrinkBox weren't kidding around. Severed is unlike any of the developer's previous projects. In fact, it's quite unlike any game on the market today. Part dungeon crawler, part touchscreen game, Severed is emblematic of a generation of video games that refuse to be shoehorned into a single genre. 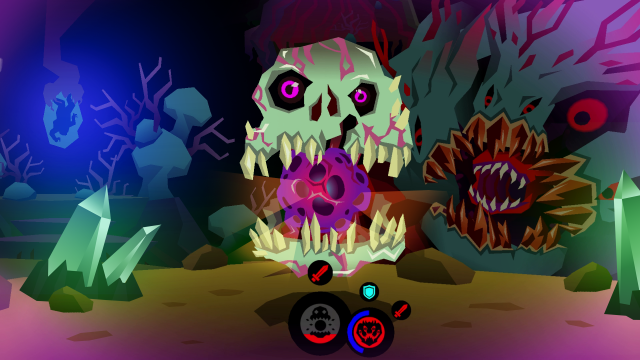 In Severed, players take on the role of Sasha, a one-armed warrior who searches for her missing family in a nightmare world. On her journey she must fight monsters, solve puzzles, explore dungeons, and meet some colorful locals. The dreamlike-search-for-loved ones plot device has been done before - in games like Limbo and Drinkbox's own Guacamelee! - but in Severed it's particularly moving and haunting.

Severed plays like a mix of Shining in the Darkness and Fruit Ninja, with a little Metroid and Dead Space thrown in for good measure. Players move and turn Sasha, depending on handedness, with either the d-pad or the triangle, square, circle, and cross buttons, and interact with the game world via the Vita's touchscreen. They can slash at enemies by drawing their fingers across the screen, pick up keys with a simple touch, and rotate wheels by performing a circular motion. 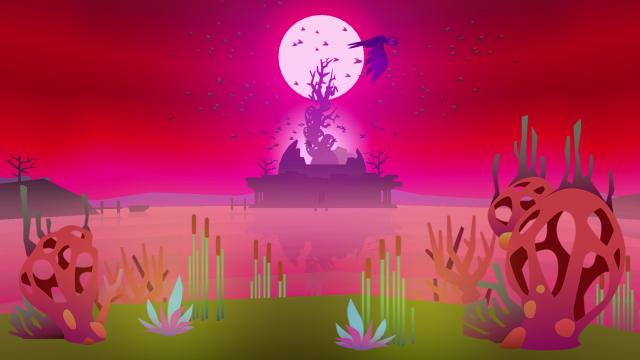 Everything is done in a first-person perspective, and Sasha moves forward one room at a time. Exploring Severed's beautiful and strange landscape is essential, and one of the many joys of the game. In dungeons and in the overworld there are secret rooms with breakable vases, mementos, and heart and brain pieces, which enhance Sasha's health and mana, respectively.

A handy map shows the lay of the land, keeping track of secrets found and the percentage of the area discovered. It's a completionist's dream come true, even if some of the puzzle rooms are a little on the easy side. The only real drawback of exploration is a lot of backtracking; expect to trudge back and forth across the game world early and often. There is no fast travel mechanic, unfortunately, and only late in Severed does the game offer shortcuts between dungeons. 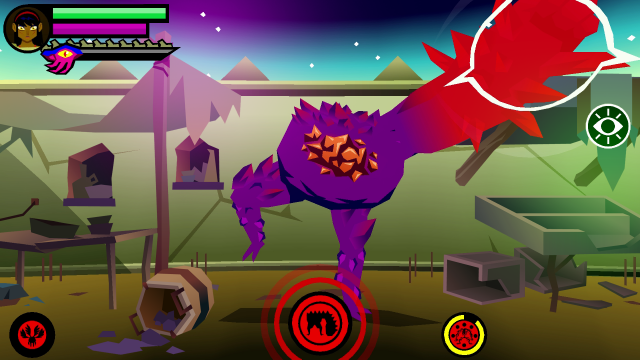 Exploration is just one part of the Severed trinity. The other two - combat and crafting - are similarly enjoyable. As Drinkbox demonstrated with Guacamelee!, it can make an action-adventure game with a deep and rewarding combat system. Severed is no different. Players must employ careful timing, accurate swipes, and judicious use of magic to take down the many different monsters in the game.

At first, monsters appear that are easy to dispatch. There's a multi-legged beast whose vicious attacks need to be countered with a swipe in the opposite direction. There's a cyclops whose moldy growths must be whittled down before Sasha can attack his vulnerable eye. As the game progresses, however, more formidable foes appear. Some have armor; some attack three times in quick succession; some use magic buffs. 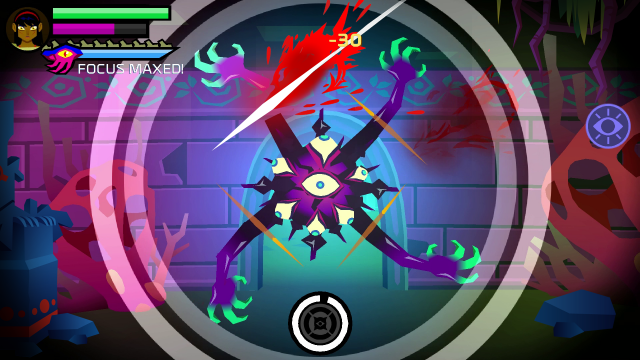 In order to topple these monsters, players need to upgrade Sasha's skill trees. This is where the Dead Space inspiration comes into play. If Sasha builds up her combo meter to a fever pitch, enemies will freeze briefly once defeated. At this point players have a small window to sever enemies' organs and limbs. You can then use the parts to boost Sasha's attack power, increase mana regeneration, and enhance magic. If you run out of parts, you can convert giblets, which are found in vases around the game world, into organs, wings, and arms.

Overall, Severed is an extraordinary game. It's visually and thematically rich; it boasts a deep and involving combat system; it includes plenty of wonderful places to explore; and its light RPG elements give players just enough control over upgrade paths. If this is to be the Vita's swan song, so be it. It's arguably DrinkBox's greatest work, and it's an early contender for game of the year.

Our Severed giveaway has finished. Congratulations to our winners - Shadow8 and iamRockman.

This review is based on a digital copy of Severed for the PSV, provided by the publisher.

SOUNDING OFF!!! unfortunately, I have no DrinkBox experience. But I love RPGs, I love old school and I love unconventional art styles. And my VITA/PSTV has been rather nice to me as of late. It would be nice if it could get... nicer.

My favorite DrinkBox title is Guacamelee! I really enjoyed the humor and characters.

My favorite Drink Box game is definitely Guacamelee. The humor was just something else.

Guacamelee is definitely my favorite of their games, followed very closely by the Super Turbo champion edition. Javier being Nerfed bothered me a little even with all the extra content.

Guacamelee was actually my first Drinkbox studios title and i loved it. From the Platforming, to the puzzles, and the hilarious story/characters. It brought back the fun factor from the past, and made a modern day classic.

I loved Guacamelee, I even got the platinum on ps4, my favorite moment was when you destroyed one of the statues and the old man says you wont get any upgrade or new move, and the game even celebrates you got nothing xD it really made me laugh. I will keep watching Drinkbox work closely to see what comes next after severed.

Great review, i've been looking forward to it since the day it was announced ! Quite happy that Drinkbox is interested in the device !

Nice! My favorite moments were finding all the little easter eggs in guacamelee. I had to replay it a few times to notice them all xD

First line mentions "at least one company that believes in the Vita" but there are weekly games coming to the system still, heck the last "This weeks US PSN Releases" article has 15 new titles, 5 of which are for the Vita system. Just strange the spread of the idea that the system is getting no new games with this being the exception here, where clearly the Handheld is a popular platform to port or make games for still.

As for the compo, sadly I'm a EU Vita owner so can't win this, but have to say while playing through Guacamelee encountering all of the hidden easter eggs and cultural references was just fantastic fun, From Cactuar Statues, Metroid monuments, posters for other gaming stars like Mega-Hombre and EL Mascara just killed me while playing this game. Top Notch stuff filling the backgrounds with content to draw us into the world even more.

Guacamelee was great from start to finish, and the challenge rooms in the Super Turbo edition were crazy and frustrating, but so rewarding

nice review excited to try play it. As for the competition my favorite experience with Guacamelee was easily playing coop with my partner and first activating turbo mode after playing the original.

And the winners are...Shadow8 and iamRockman! Congratulations! Codes are in your inboxes. Enjoy the game! And thanks to all who participated.

Impressive, didn't expect such strong reviews for it.

@the competition - I'm not eligible but I will say that Tales from Space is my favourite DrinkBox game.

Terrific review. Like many others, I loved Drink Box' previous Vita games. Will be checking this one out!

I loved Guacamelee, I even got the platinum on ps4, my favorite moment was when you destroyed one of the statues and the old man says you wont get any upgrade or new move, and the game even celebrates you got nothing xD it really made me laugh. I will keep watching Drinkbox work closely to see what comes next after severed.