Bethesda has announced in a new blog post the new Doom game will run at 60pfs and 1080p on all platforms.

"We want players to wonder how Doom and idTech 6 games can be so visually stunning at 60 frames-per-second at 1080p on all platforms, when other titles cannot even achieve a similar look at 30 frames-per-second," said lead project programmer Billy Khan. "Our goal is to be the best-looking game at 1080p at 60fps." 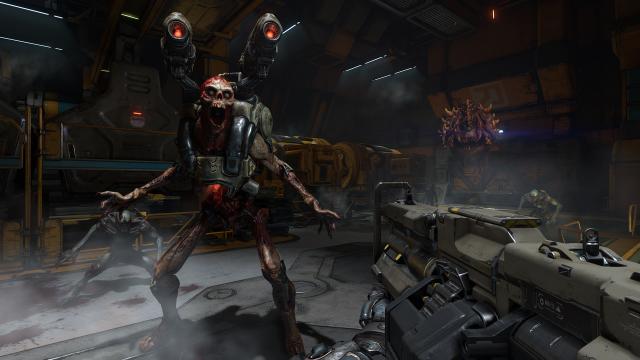 Doom releases on the PlayStation 4, Xbox One and Windows PC worldwide on Friday, May 13th.

60fps should be a standard for all fps.

No, all fucking games.

Not all games need 60fps, and its a trade off vs graphics.
Shooters play better at 60fps though, so its sensible they aim for that.

1080p 60fps should be a standard in the next few years or when the next console systems come out.

120 fps for games like doom, titanfall, cod, and destiny where the player moves quickly

Perfect resolution and frame rate for splattering the forces of hell!!

Wow, id software is completely different. And yeah, good to know 60fps 1080p handles on PS4/Xbox One. Can't wait to get the collector's edition!

It remains to be seen what sacrifices (if any) have been made to make that happen.

I bet its going to use dynamic resolution like Rage and Wolfenstein. PS4 will probably virtually locked at 1080p while Xbox One will dip sonewhere around 900p. I hope I'm wrong but thats my prediction.

Halo 5 was locked to 1080p throughout the game and in Arena. Dips only happen in Warzone...

Nah, Halo 5 had resolution dips in campaign and arena. Warzone is when its most apparent, seems like its doing 720p there. Which is okay though for 60 fps in that scale of gameplay.

You might want a new rulebook, because yours seems outdated...

..the way it should be across the board.

I just hope it;s not locked at 60fps on PC, especially for those that already paid decent money for monitors that display above 60.

We can only hope. Wolfenstein is locked at 60fps but this game has a new engine, so who knows.

Afaik they abandoned Megatextures with their latest engine, I would hope they also don't have it locked to 60. I've been meaning to get a new monitor sometime this year or next and I really don't want some devs thinking it's great to lock the frame rate on the PC versions, it makes no sense.

I'll believe it when I see it.

"Our goal is to be the best-looking game at 1080p at 60fps." Well you fell short by a good bit, Doom isnt amoung the best looking games soon to be out. But for a shooter, the 60fps and gameplay matter more, so no biggie.

Don't understand console gamers commenting on "isn't best looking game", buy a PC then if you are a graphics whore.

That is easy. Cause game is FUGLY.