Tweet
by Brandon J. Wysocki , posted on 07 December 2015 / 10,171 Views
Rainbow Six is the longest-running of the Tom Clancy video game franchises, but it hasn't had a full-fledged release for more than seven and a half years. The development of the follow-up has been full of ups and downs, from the cancellation of Rainbow Six: Patriots, to the delays and buggy betas of Rainbow Six Siege. While the retail release retains a handful of these issues, after countless hours playing both the betas and the retail version of the game I've come to the conclusion that Rainbow Six Siege is something of a return to form that also introduces innovative new gameplay features.
At its core, Rainbow Six has always been about intense, strategic experiences, whether playing solo or with and against others. Having played most of the mainline titles since the original in 1998, I feel that the more recent outings, while still very good, ended up losing some of that edge and more closely embodied the frenetic feeling of so many other shooters. 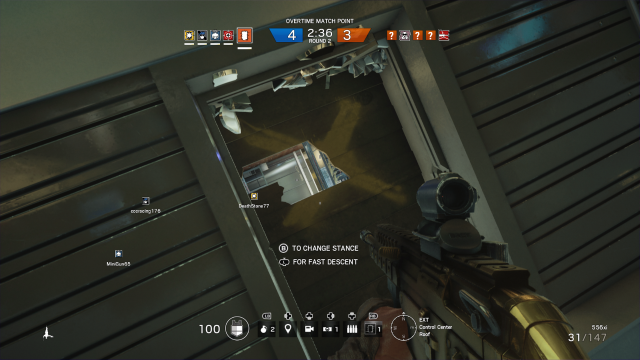 Siege, namely in terms of competitive multiplayer, feels fresh but also inspired by the suspenseful, unforgiving scenarios that rewarded strategy in the earlier titles. At first glance, it’s easy to overlook some of the depth that versus multiplayer offers, as the casual matchmaking takes out some simple, but very valuable options that appear only in ranked mode.
In both ranked and casual modes you play on one of the 10 currently available maps (there's an 11th I’ve only encountered in Terrorist Hunt mode). You can unlock and choose from a total of 11 different characters, each with unique weapons and skills, as both defenders and attackers, for a total of 22 options.
There are some really varied ways in which you can utilize each of the loadouts, including for example being able to compliment the loadouts of other squadmates, or conversely squander those options. That’s where the first strategic part of the game starts to come in to play. Similarly, certain loadouts can counter those of your opponents quite nicely. 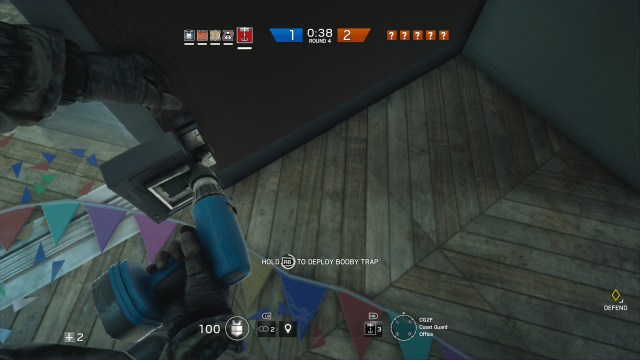 The maps are well designed to be utilized according to skill, preferred methods of gameplay, and loadouts as well. There are also a decent amount of destructible walls and floors on the maps, which can be leveraged by both sides. The maps are nicely varied, with some lending themselves more to certain approaches than others. With the variety of maps and character choices that are available, as well as the human element of playing with and against different players, most rounds feel pleasantly unique.
The intensity of the multiplayer harkens back to that of Splinter Cell: Pandora Tomorrow and Chaos Theory, which is high praise indeed coming from me. Siege is also well designed and does a great job of encouraging and rewarding players for communicating and strategizing, unlike most other shooters. 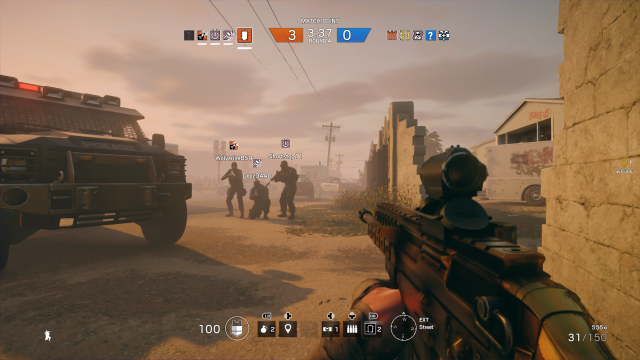 Graphically Siege is fairly unexceptional, but the audio is absolutely terrific, and not just in how it conveys the impact of weapons fire and explosions. Footsteps and sounds of construction materials breaking and shattering really intensify the experience, especially if you’re amongst the last to survive on your team. Moreover, sound is arguably one of the most useful tools in the game. You can hear an enemy switching magazines, and footsteps and other interactions with the map often betray an enemy’s location. Leveraged properly, the audio is not just of excellent quality, but also of great use.
Sadly, issues from the betas persist in the final release. Though the servers are much more stable, I still experience more issues than I typically do in finished products. I’ve lost connection mid-game, and lost teammates in the same manner, for example. This is not just a minor inconvience, either; you get temporarily banned from ranked play if you quit a match (which is great), even if the reason for doing so is entirely down to the stability of the game's own servers (not so great). 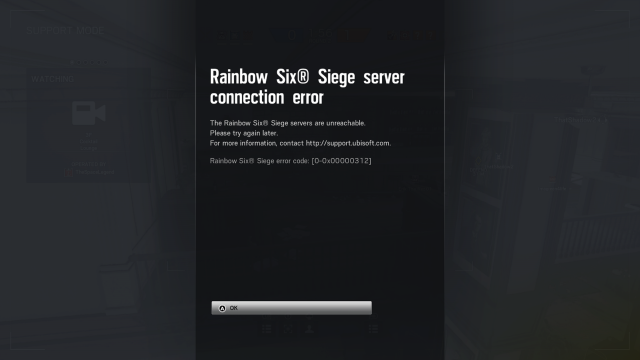 Additionally, there are some design decisions that I can’t help but question. With 20 unlockable characters, each with customizable loadouts and unlockable weapon accessories, it seems strange to have to completely back out of multiplayer matchmaking to be able to take fully take advantage of all of that.
I’ve both benefitted from and been the victim of some dubious hit detection too. While Ubisoft has acknowledged the issue, it’s a shame it made it into the retail release at all, especially for a game that is so largely focused on online multiplayer. It could be related to the aforementioned dubious hit detection, or simply my imagination, but similarly I'm highly suspicious of an overly generous aim-assist that seems to far too often reward “spraying and praying” with a random headshot. Again, I’ve both benefitted and suffered from this, but I strongly suspect some balancing is needed.
You may have noticed that I've thus far glossed over any discussion of game types within competitive multiplayer, as well as game modes outside of it. That’s because, to me, they are largely forgettable and uninspired. In versus there are three different game modes: Hostage, Bomb, and Secure Area, and they are more similar than not. 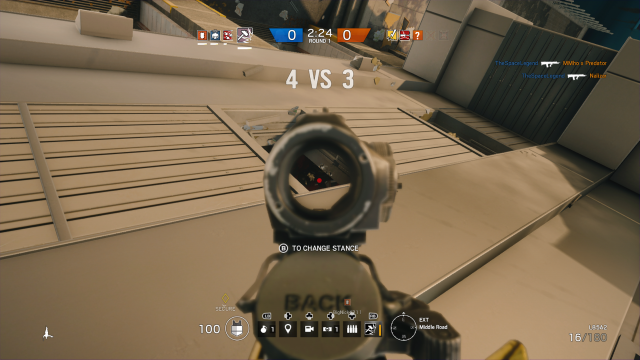 In Hostage, you need to grab the hostage and essentially just leave the building, even if barely, or alternatively, you must prevent that from happening. In Secure Area, there’s a biohazard container that you must stand by in order to secure as the attacking team. Perhaps the most unique of the three is Bomb, where the attackers have a defusing device that they must place by one of two bombs on the map and protect while it takes its time to defuse a bomb. Regardless of the objective, a round can be won by eliminating all of the enemy players, which is how the vast majority of my rounds have ended.
Beyond versus, there is Terrorist Hunt, which is essentially a horde mode that you can play alone or with others. It revolves around the same three game modes as versus, but is not nearly as dynamic or satisfying. It’s fun for short periods of time, and very useful for getting acclimated to maps and the gameplay in general, but it doesn’t seem to hold much replay value. Inexplicably, you must be connected to the game's servers in order to play this mode, even solo, which is a shame because it would've been a great option to play in the event that you find yourself without internet, or if and when the game's servers go down.
The only mode that can be played offline is called Situations, although even this mode has reduced functionality offline. Situations is a truly single player experience and somewhat similar to playing Terrorist Hunt solo. Primarily it serves as an excellent tutorial for the core of the game but lacks replay value beyond some built-in challenges. 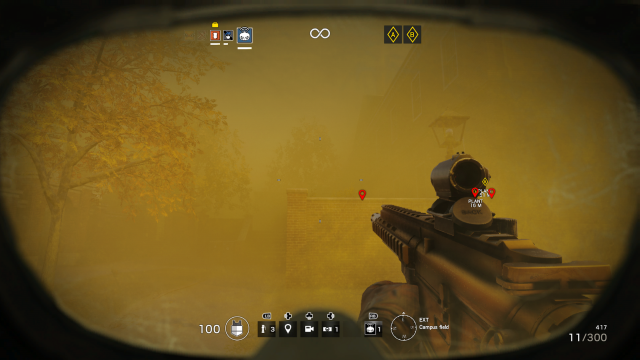 Renown rewards, which are used to unlock characters, weapon accessories, and some weapon skins, are not awarded offline in any of the aforementioned game mode. So while it’s a nice touch that points earned in any mode serve the same purpose, that really only applies if you play the game online. Ultimately, Rainbow Six Siege is really an online-only experience. It’d be borderline insane to buy it just for Situations mode, or to restrict yourself to Terrorist Hunt, whether solo or with others.
Where Siege (and Ubisoft) should be commended, however, especially compared to similar multiplayer-centric games, is in the decision to provide all DLC maps free of charge. There is a season pass that you can purchase, but it's easily ignored given that the most crucial DLC of all (the extra maps) will be released for free. 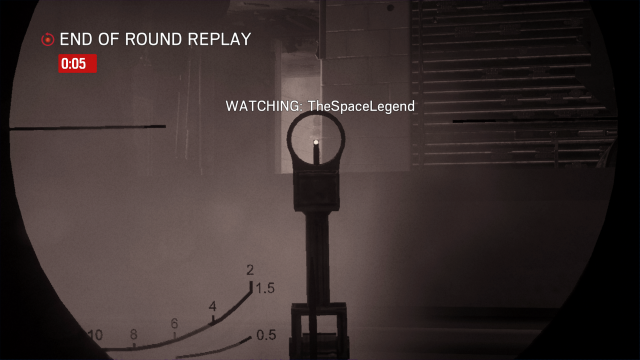 While some will decry the lack of single player content, the end result is an exceptional and distinct multiplayer experience. Rainbow Six Siege offers thrilling and satisfying gameplay that rewards strategy and communication unlike the vast majority of modern shooters. It is marred by some technical flaws, although they will hopefully be addressed in time, but this is a small black mark against an otherwise superb experience.

This review is based on a retail copy of Rainbow Six Siege for the XOne, provided by the publisher.