In the fall of 2013 Atlus took everyone by surprise when it announced Persona 4: Dancing All Night for the PlayStation Vita. It is, after all, hard to imagine a JRPG being transformed into a rhythm-based dancing game. Initially it was assumed that the game would be a simple Hatsune Miku: Project DIVA clone, albeit one with a paper-thin Persona 4 cover. While the folks at Atlus clearly have taken some pointers from the Project DIVA series, they've also managed to stake their own claim to the rhythm genre. By adding some unique twists to the gameplay and a proper story, Atlus has created a great rhythm title. 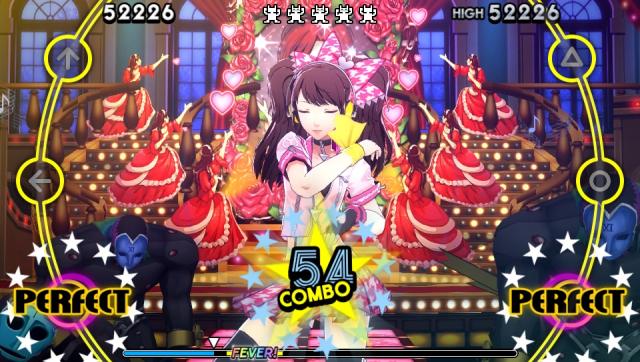 Persona 4: Dancing All Night’s gameplay is based around hitting notes in time with the music. These notes travel from the centre of the screen outwards, towards six stationary targets; your goal, in short, is to hit the notes when they’re perfectly aligned over the targets by pressing the corresponding button. There are also a number of more complex note types - such as scratches, unison, and hold notes - which become more frequent as you progress through the game and the difficulty ramps up.

The core game is a blast to play - the simple rhythm mechanics and fast-paced nature combine to create an addictive experience. Hitting notes feels just right and aligns perfectly with the music, allowing you to often predict the next set of notes after playing a song a couple of times. 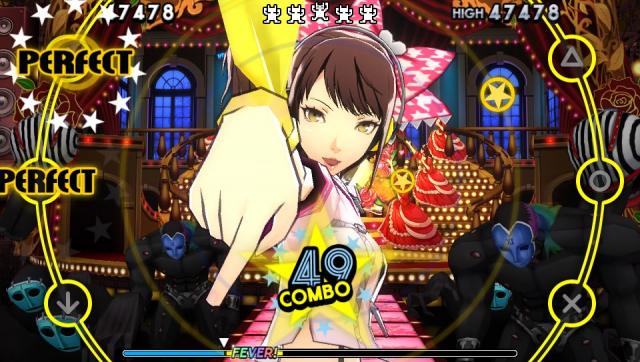 The only real complaint I have concerning the gameplay is the fact that you have to use the control sticks to hit scratch notes. It feels quite uncomfortable and unnatural having to move your hands from their usual positions in order to perform these notes. I would have preferred to use the bumpers for these notes instead. Fortunately if you miss the scratch notes your score isn't negatively affected, so newcomers can generally ignore them.

One of Persona 4: Dancing All Night’s great strengths is its ability to satisfy both veterans of the genre and those who have never touched a rhythm game before. Simple inputs and low repercussions for messing up on the lower difficulty levels ensures that newcomers will be able to manage most 'Normal' difficulty songs, while a fiendish difficulty curve on the higher difficulties will present a challenge to genre veterans. Rest assured, if you thrive off the pain of a harsh rhythm game you'll find plenty of agonizing joy in Persona 4: Dancing All Night, especially in Free Dance mode. 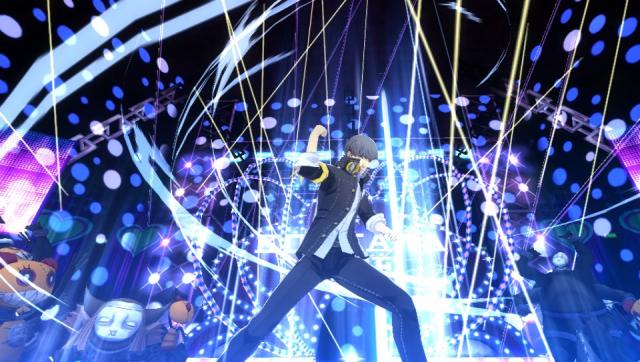 Persona 4: Dancing All Night features two basic gameplay modes: Story and Free Dance. Story mode takes place after the events of Persona 4, with Rise making her comeback in the idol industry. She has convinced the staff to allow the gang (Yu, Teddy, Kanji, Yosuke, Natoto, Chie, and Yukiko) to be her back-up dancers for her return performance. But those plans unravel with the disappearance of the Kanamin Kitchen idol group, and the discovery of the Midnight Stage. It’s up to Yu and the gang to rescue the Kanamin Kitchen girls from Shadows which lurk in the Midnight Stage... by dancing!

Atlus definitely made the right choice to include a Story Mode. It allows the game to take advantage of the strong chemistry that was built up between the characters in Persona 4 and means that there's more to this particular rhythm game than a simple succession of levels. The game is fully voiced and the story is camp but fun, with Teddy throwing in random bear-puns and everyone sandbagging Yosuke when he tries to act cool, which makes it an enjoyable ride for Persona 4 fans. 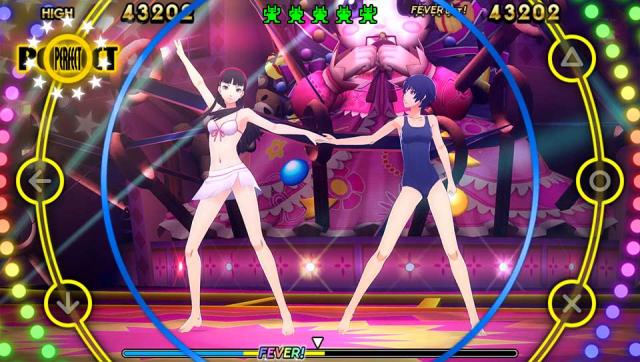 Story Mode's main downfall is its repetitiveness. You actually repeat the same process each time you rescue a member of Kanamin Kitchen. While the dialogue and subject matter is different, the sequence of events is identical each time. In all, Story Mode takes about 3-6 hours to complete, depending on if you prefer to listen to the voice acting or skim through the text.

Where you'll spend the majority of your time is in Free Dance Mode. There are four difficulties to choose from (Easy, Normal, Hard, and All Night, which is locked until you satisfy certain conditions), and the songs themselves are also ranked in difficulty from one star to 20 stars. You can also use various items to make the songs easier or harder in this mode, and these will either increase or lower the score and amount of P$ you get for clearing the song. Item effects include the ability to press any button to hit a note and reducing the speed of the notes, to randomising the note order and even making the notes invisible. 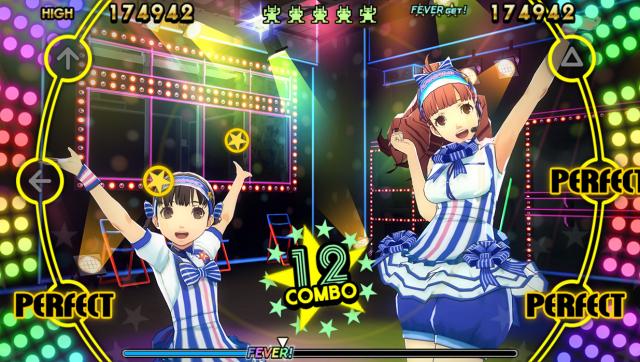 The other draw of Free Dance Mode is the fact that you can customize your dancer’s appearance. There are a dozen or so costumes to choose from for each of the dancers (although Teddie, Nanako, and Kanami only have a handful), ranging from simple casual clothes to full-on maid and butler uniforms. While the costume selection is wide and varied, the accessory department is lacklustre; you're only given glasses and headphones to select from. A few of these are quite cool, like Kanji’s 70s techno glasses, but in general most are basic and dull.

A quick word of warning - Free Dance Mode uses the same stages as Story Mode and therefore includes spoilers. If you want to avoid these you'll need to complete Story Mode first.

Visually, Persona 4: Dancing All Night is beautiful. Bright and vibrant colours help bring both the gameplay and the menus to life. The game also features small anime clips throughout the story, which are a nice addition. You can even look at the 3D models and artwork from the game's Story Mode in the Collection section of the game. 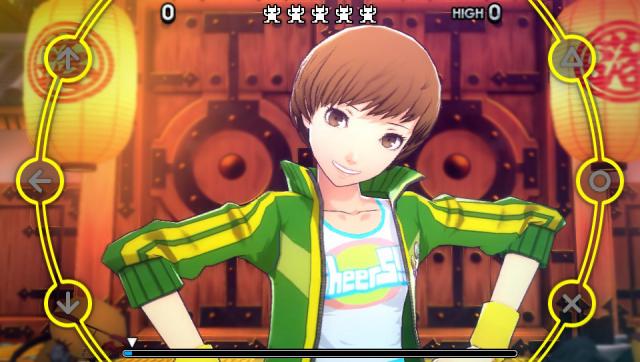 But of course the key ingredient to a good music and rhythm game is the soundtrack. Persona 4: Dancing All Night includes music from Persona 4, Persona 4: Golden, Persona Q, Persona 4: Arena, as well as original music. Most of the 27 songs fall into the pop, techno, or hip-hop genres, and 8 of those are remixes, so the soundtrack is far from perfect, but it is solid. Hopefully DLC songs will help to fill in the gaps though.

When a popular franchise that is all but synonymous with a single genre receives a spin-off you never quite know what to expect. For every Mario Kart there's a Shadow the Hedgehog. Luckily, Persona 4: Dancing All Night is a success, just like Persona 4 Arena before it. It could certainly be improved - the relatively small song catalog and limited customisation options to name but two areas that a ripe for improvement - but this Persona rhythm debut generally hits all the right notes.

This review is based on a digital copy of Persona 4: Dancing All Night for the PSV, provided by the publisher.