Gloomhaven Headed to Consoles in 2023

Rumor: The Last of Us Remake to Launch in Holiday 2022

A complete overhaul of the Xbox One dashboard is releasing worldwide this fall. 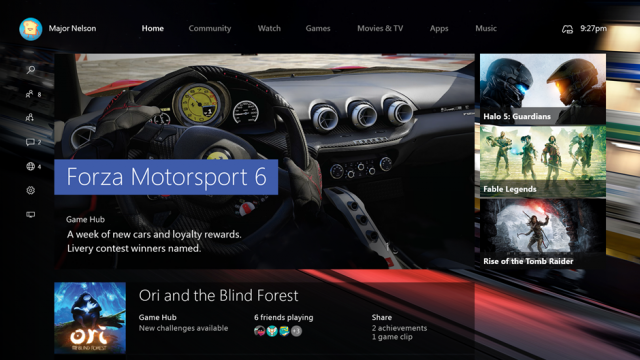 The look and layout of the dashboard is completely new and Microsoft has unveiled some of the changes:

The Xbox One is also getting a Chatpad that will attach to the bottom of the Xbox One controller. It will work on the Xbox One, as well as Windows 10.

A new feature that will be available on the Xbox One only will allow two buttons to be programmed. It will give the user access to features like Game DVR, screenshots, or apps.

The Xbox Chatpad will be released on November 3rd for $34.99.

The old Xbone UI was completely shitty, so hopefully this very direct inspiration from the PS4's Dynamic Menu UI works out better. It is kind of funny to see just how much this is the PS4's UI, made vertical. I hope it's as snappy, because the lagginess on my Xbone UI annoys me.

Yeah I just bought an XBO and I cant find anything, hell soetimes I dont even know how to close shit :P

So far it looks like it runs much better (from what major nelson had shown off). But I haven't tested it yet, as Preview members haven't gotten it yet (yes I'm a preview member).

I really get the feeling that Phil wasn't shitting when he said he was going to fix Don's non game related BS. This UI looks like it will actually work and was built for a controller first.

Wait, I like it the way it is now. It's super easy to navigate with only a few clicks to get anywhere. Is the upgrade mandatory?

It eventually will be. You'll most likely have to install it to have windows 10 running on it and to run backwards compatible games, as all of that comes out at that time. I agree though, that the way it looks now is better, but it currently runs like shit.

And its made out of old tech that can fit in the palm of your hand. What a rip off.

That's not too bad. It works on PC too and is programmable.... ...the one for 360 (if im remembering correctly) was about that price too.

Is it my Fanboyism speaking or does it look like a vertical PS4 UI?

Never played a ps4 do I have no clue.

Well sort of. It seems like there's menu bars horizontally & vertically. I prefer the way it looks now, but if its faster...